WASHINGTON, Aug 15 2014 (IPS) - When U.S lawmakers departed Washington for a month-long recess, they left behind a simmering debate over what to do about the tens of thousands of Central American children and adults that continue to cross the U.S. southern border.

Many potential solutions have been tabled as to how the federal government should handle the unprecedented influx. Yet these strategies, which include two proposals pending in Congress, are built on starkly differing views over why these migrants are leaving their homes in the first place. 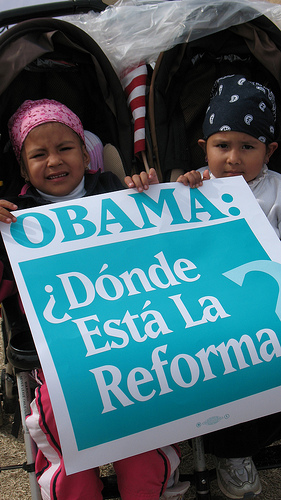 Orzoco’s field research, released this week, seems to point to the latter.

“[I]ntentional homicides emerge as a more powerful driver of international migration than human development,” his report notes, cautioning that “migrants are primarily coming from some of the most populous violent municipalities in El Salvador, Honduras and Guatemala.”

“They’re actually, for the most part, escaping for fear for their life,” he says, clarifying that these threats apply to both minors and adults in Central America.

Yet despite the fact that Guatemala, El Salvador and Honduras – collectively known as the Northern Triangle – produce higher homicide rates than war zones such as Afghanistan or Iraq, some U.S. lawmakers doubt that this phenomenon is responsible for recent months’ mass Central American migration.

Instead, sceptics attribute the inflow of tens of thousands of migrants to President Barack Obama’s immigration policies.

For these lawmakers, then, the answer is more security at the southern border.

Indeed, this is precisely what the Republican-led House of Representatives has prioritised in its current bill worth some 700 million dollars, more than half of which would be allocated to tighten security along the southern U.S. border. The remainder would be used to accelerate deportations.

President Obama has said he would veto the bill, calling it “extreme” and “unworkable”.

Orzoco, too, considers the security-focused approach to be “myopic”. Instead, he and others say that lawmakers must focus on increasing assistance to Central America – dealing directly with the poverty and violence that appear to be spurring much of the recent influx.

“It’s good not to look just under security lines, and that we invest in real economic development while also addressing the security situation,” Adriana Beltran, a senior associate at the Washington Office on Latin America (WOLA), a watchdog group here, told IPS.

U.S. aid to Central America has historically been weak. In 2013, the region received just 1.3 percent of U.S. foreign assistance, according to a new fact sheet from the U.S. Global Leadership Coalition (USGLC), a Washington-based network of businesses and NGOs.

But the White House has put forward a proposal that would bolster Central American assistance by some 300 million dollars. Larry Knowles, a consultant with the USGLC, informed IPS of the bill’s relative breakdown.

While one third of this aid would go towards improving governance standards, including fiscal and judicial reform, another third would go towards economic development, and the remainder would be earmarked for crime-prevention efforts, youth-at-risk programmes and reintegration initiatives.

The fate of that bill remains unclear, however, as it is unlikely to pass the House of Representatives. Unlike the Senate, the House has not declared Central America’s internal strife worthy of “emergency aid appropriations”.

“There needs to be a much more inclusive strategy to address all of these problems,” Orzoco said.

Such analysis is also supported by Oscar Calvo-Gonzalez, chief economist for Central America at the World Bank, though he cautions that violence is “one of the many causes that drive people to move.”

Calvo-Gonzalez says that municipal-level programmes that can help the situation.

Economic growth in Central America must be shared, Calvo-Gonzalez emphasises, citing high inequality and “limited opportunities for advancement” as his primary concerns.

“Central America stands out as poverty has not declined consistently,” he says, “though [poverty in] the rest of Latin America has declined, Central America’s poverty is stagnant.”

He says the World Bank has been working in Central America to mobilise additional tax revenues and build the capacity of domestic governments in the region.

WOLA’s Beltran echoed the effectiveness of such a localised approach, calling in particular for greater investment in violence prevention.

“There is evidence of programmes working at the community level to address youth violence and security,” she says, citing a 40 percent  reduction in Honduras’ Santa Tecla as one such example. “Social services, the police, the church and other local bodies can come together to find a solution.”

For the Inter-American Dialogue’s Orzoco, fixing such problems is beyond the domain of the Northern Triangle and its governments. “These issues require responsibility of both Central American governments and the United States’ government,” he says.

Orzoco justifies strengthened U.S. development assistance for the region by first pointing to the shortcomings of Central American efforts, listing an ongoing lack of legislation and inadequate initiatives to “prevent the continuing outflow of kids” as examples.

“Central American governments, so far, have not been very accountable,” he says.

Orzoco also says the U.S. government has generally refused to share responsibility for Central America’s problems, despite Washington’s history of economic and political hegemony and interventions in the region. He points, for instance, to a “complete neglect” of organised crime.

“What organised crime has done is create an ecosystem of irregular economic activity that presents itself as a profitable one, given the context of property,” Orzoco says.

Other analysts have gone further, suggesting that the United States has contributed to the region’s growth in organised crime through its “war on drugs” and fostering of influential gangs in U.S. prisons.

But Orzoco cautions that despite the United States’ qualified intention to assist Central America, some lawmakers may be doing so for political purposes – a factor that will only continuing to strengthen as the November elections here draw closer.