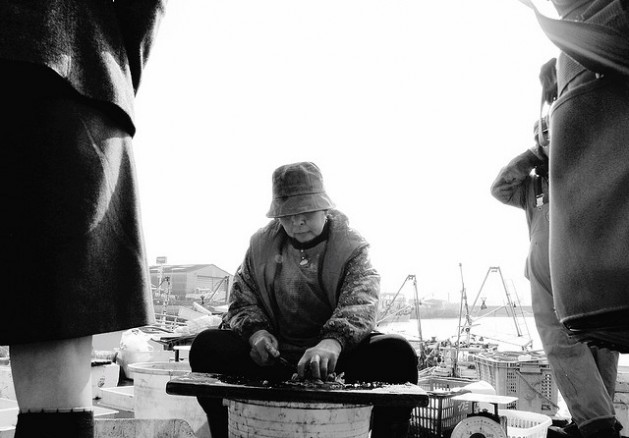 “I work four jobs and barely survive,” said the writer, who disclosed only her penname to IPS. Her monthly income after writing articles, working at a call centre, selling cosmetics five days a week and working one night at a bar hovers at close to 1,600 dollars.

Maeda belongs to the burgeoning ranks of the poor in Japan, a country that saw its poverty rate pass the 16-percent mark in 2013 as a result of more than two decades of sluggish growth that has led to lower salaries and the cutting of permanent jobs among this population of 127.3 million people.

She also represents an alarming trend: rising poverty among women, who now comprise the majority of the poor and old in Japan, the world’s third-largest economy and fastest-aging society.

“We have women who are desperate. Because they do not hold secure jobs, they endure searing problems such as domestic violence or workplace harassment." -- Akiko Suzuki, of the non-profit ‘Inclusive Net’
Indeed, Maeda points out her pay is now a low 50 dollars per article, down from the heady era of the 80s and 90s when she earned at least three times that rate.

Japan defines the poverty threshold as those earning less than 10,000 dollars per year. The elderly and part-timers fall into this category, and Maeda’s hard-earned income, which places her slightly above the official poverty line, nonetheless keeps her on her toes, barely able to cover her most basic needs.

“When the call centre cut my working days to three a week in June, and payment for freelancers [dropped], I became really worried about my future. If I fall sick and cannot work, I will just have to live on the streets,” Maeda asserted.

After paying her rent, taxes and health insurance, she admits to being so hard-pressed that she sometimes borrows from her aging parents in order to survive.

Maeda’s story, which echoes the experience of so many women in Japan today, flies in the face of government efforts to empower women and improve their economic participation.

In fact, a sweeping package of reforms introduced earlier this year by Prime Minister Shinzo Abe was met with skepticism from gender experts and advocates, who are disheartened by the myriad social and economic barriers facing women.

Dubbed ‘Womenomics’ in line with Abe’s economic reform policies – based on anti-deflation and GDP-growth measures that earned the label ‘Abenomics’ in early 2013 – the move calls for several changes that will pave the way for Japanese women, long discriminated in the work place, to gain new terms including equal salaries as their male counterparts, longer periods of childcare leave and promotions.

Given the fact that 60 percent of employed women leave their jobs when starting a family, Abe has promised to tackle key barriers, including increasing the number of daycare slots for children by 20,000, and upping the number of after-school programmes by 300,000 by 2020.

Another target is to increase women’s share of leadership positions to 30 percent by that same year.

“We have set the goal of boosting women’s workforce participation from the current 68 percent to 73 percent by the year 2020,” Abe wrote, adding, “Japanese women earn, on average, 30.2 percent less than men (compared with 20.1 percent in the U.S. and just 0.2 percent in the Philippines). We must bridge this equality gap.”

But for experts like Hiroko Inokuma, a gender researcher focusing on the challenges facing working mothers, this is a “tall order”, especially in the light of “growing job insecurity, which is already leading to dismal poverty figures among women.”

Indeed, the numbers paint a grim picture: one in three women between the ages of 20 and 64 years of age and living alone are living in poverty, according to the National Institute of Population and Social Security Research (NIPSSR), a leading Tokyo-based think tank.

Among married women, the poverty figure is 11 percent and counts mostly older women whose husbands have died. Almost 50 percent of divorced women have also been identified as grappling with poverty.

Health and Welfare Ministry statistics indicate that Japan is now registering record poverty levels; the year 2010 saw the highest number of welfare recipients in the last several decades, with 2.09 million people, or 16 percent of the population, requiring government assistance.

Against this backdrop, Akiko Suzuki, of the non-profit ‘Inclusive Net’, which supports the homeless, explained to IPS that Abe’s proposed changes and targets are highly illusive.

“After years of working with low-income people, I link the increase in females grappling with poverty to the rising number of part-time or contract jobs that are replacing full-time positions in companies,” she said.

The nursing industry, for instance, employs the highest number of part-time employees in Japan, of which 90.5 percent are women.

Inclusive Net reports that women currently comprise 20 percent of the average 3,000 people per month actively seeking support for their economic woes, up from less than 10 percent three years ago.

“We have women who are desperate. Because they do not hold secure jobs, they endure searing problems such as domestic violence or workplace harassment,” said Suzuki.

Japan has 20 million temporary workers, accounting for 40 percent of its workforce. Females comprise 63 percent of those holding jobs that pay less than 38 percent of a full-time worker’s salary.

Aya Abe, poverty researcher at the NIPSSR, told IPS that poverty among women has been a perennial problem in Japanese society, where they traditionally play second fiddle to men.

“For decades women have managed to get by despite earning less because they had earning husbands or lived with their parents. They also lived frugally. The recent poverty trend can then be related to less women getting married or being stuck in low-paid, part-time or contract work,” she stated.

A highlight of the prime minister’s gender empowerment proposals is the plan to remove a sacred tax benefit for husbands that also protects their working spouses who earn less than 10,000 dollars annually.

The tax was introduced in 1961 when Japan was composed of mostly single-income households led by male breadwinners under the life-term employment system.

Proponents say discarding the tax benefit will encourage women to work full-time while others argue this could increase women’s vulnerability by stripping them of a crucial social safety net.

While the political debate rages on, hundreds of thousands of Japanese women are struggling to make it through these dark days, with no sign of a silver lining. According to experts like Suzuki, “An aging population and unstable jobs means the feminisation of poverty is here to stay.”