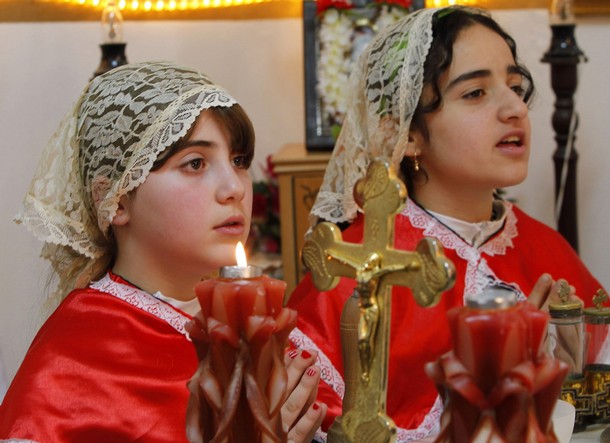 Iraqi Christians attend an Easter mass at Chaldean Catholic church in Amman Apr. 24, 2011. Thousands of Iraqi Christians fled to neighbouring Jordan following a spate of bombings that targeted churches in Iraqi cities in the past few years. Credit: http://catholicdefender2000.blogspot.com/

SAN DIEGO, Sep 12 2014 (IPS) - For decades, the minority Christian population of Iraq has been suffering hardships. But in the summer months of 2014 – and since the beginning of the military campaign by ISIS (Islamic State in Iraq and al-Sham, also known as ISIL or Islamic State) – the situation has gone from bad to intolerably worse.

Chaldean Christians number over half a million people who are ethnic Assyrians and indigenous to predominantly northwestern Iraq and parts of northeastern Syria, southeastern Turkey and northwestern Iran.

The core villages of the Chaldean people, located in the Nineveh plain in northwestern Iraq, were attacked and decimated by ISIS in a matter of days, leaving the fleeing Christian inhabitants not only homeless but also internally displaced refugees (IDRs) in their own ancient land.

After having their lives threatened and facing the stark choice of either converting to the warped and extremist interpretation of Islam proselytised by ISIS, paying a heavy tax, or dying in large numbers (many by beheading), tens of thousands of men, women, children, the elderly and infirm fled.

And many of them fled on foot in the searing heat with little or no food, water or shelter – into Iraqi Kurdistan, mostly to Erbil and Duhok, seeking safety, security and asylum.

It is incumbent on all democratic peoples to aid the scattered Chaldean people who find themselves in such a desperate, stark life or death situation. Some are encouraging the displaced to return to their villages, and indeed they are always free to do so.

However, we must understand that people have chosen to leave their beloved homeland to reach safety and protect their families, even at the cost of their dignity.

Upon their return, the displaced would more often than not find their homes damaged, looted or destroyed by ISIS and their local allies.

The million-dollar question therefore is: What kind of future awaits the minority Chaldean and Assyrian Christian population of Iraq?

The people fleeing and begging for international asylum have spoken for themselves. It is now up to those in the democratic West led by the United States and Europe, together with the United Nations, to respond to this acute humanitarian crisis and crimes against humanity.

U.S. President Barack Obama’s White House address to the nation on Wednesday night was very encouraging, to say the least.

As President Obama stated, the launching of “a steady, relentless effort” to root out the extremists from ISIS “wherever they exist” shall create the necessary security environment to bring about peace and stability.

It will undoubtedly create conducive conditions for the return of displaced minority Chaldean and Assyrian Christians and the Yazidi to their homes in Nineveh province they have inhabited for over two thousand years.

The future of a united Iraq depends on maintaining peace, stability and economic prosperity for all the peoples inhabiting this ancient land.

Ensuring that the spirit of tolerance and cohabitation deepens and thrives is part and parcel of any such long-term structural solution.

It is imperative that policymakers in Washington, DC, New York and at the United Nations and in western European capitals take this long-term vision on board and act accordingly with adequate resources made available.

It is then, and only then, that the plight of the minority Chaldean and Assyrian Christians and other minorities can be addressed in a truly meaningful fashion in a future peaceful, multi-religious, multi-ethnic and economically prosperous Iraq.

Failure to do so will only see a recurrence of the tragic events unfolding in Iraq and Syria, further compounding the destitution, misery and desperation of millions of human beings caught up in the mayhem being unleashed by armed terrorists.