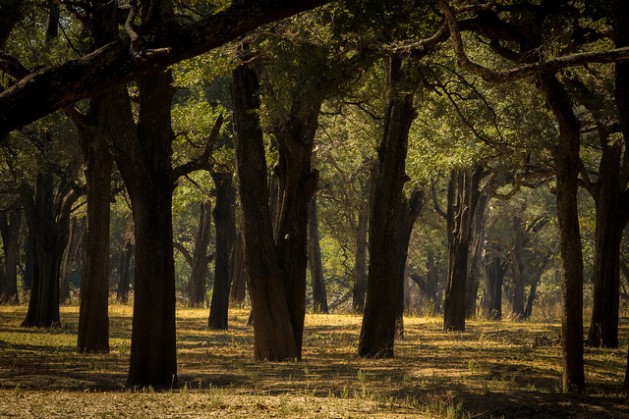 RUFUNSA, Zambia, Sep 19 2014 (IPS) - Steven Nyambose used to sell charcoal for a living until he discovered that the trees could be more lucrative in another way – through cutting them down and selling the logs to international buyers.

“We used to see this [Mukula] tree and think of it being just like any other, not knowing that it is a gold mine on its own. And now that the buyers are plenty, we have changed the business focus from the usual charcoal burning and hunting to the lucrative business of cutting and selling the Mukula logs,” Nyambose, a resident of Rufunsa, which lies about 200 kilometres east of Zambia’s capital Lusaka, told IPS.

But there is a downside to Nyambose’s business – it is illegal.

“Against such a liberal law, people are free to harvest any species, even endangered ones, because the law allows that they be regarded as timber." -- government forestry officer

Zambia has seen a rise in the demand for its timber, mainly for export. Unfortunately, much of the exploitation of the timber, especially the rare Mukula species, otherwise known by its biological classification, Pterocarpus chrysothrix, is illegal in this southern African nation.

But the trade is flourishing because of a lack of clarity in legislation that protects Zambia’s forests.

Zambia’s Forests Act of 1973 states that one cannot harvest major forest products like trees without a licence. But the act allows local communities to harvest forest produce for domestic use and not export.

The  loophole is apparently being exploited as local communities are contracted to cut the trees by timber dealers who are supplying international consumers, among them the Chinese and Americans.

The Mukula tree is in high demand among the international business communities who are using it in the production of gunstocks and other artefacts.

Locals are paid between five and 10 dollars per log.

“The charcoal business is not only a health risk but it is also not lucrative because of the high number of people in the same business. Trading in Mukula is more profitable because its market is not local like it is with charcoal, we target the Chinese nationals because they seem to be more interested in the logs,”  Nyambose explained.

The popularity of the tree lies in the fact that it has three usable layers, while other trees only have a usable heart or inner layer.

The Mukula tree’s heart wood is used for making rifle butts; the second layer is used in the timber industry for furniture, while the outer part is used for medicinal purposes.

The sudden soaring demand  from the international market for the tree has probably been triggered after the Democratic Republic of Congo, Malawi and Mozambique intensified security around the harvesting of the tree.

“We have our bosses who contract us to cut the Mukula trees. These bosses are sometimes our fellow Zambians who are more establish in the timber business or even the foreign businessmen,” Nyambose said.

The tree, which takes more than 90 years to mature, is widely spread in all provinces of Zambia apart from the Copperbelt, North Western and Western provinces.

For a long time, no attention was paid to monitoring how the timber industry operated and how the country’s precious resource was exported. However, illegal loggers and transporters are increasingly being caught.

Recently, cases of trucks laden with logs of the Mukula tree were impounded in different locations across Zambia.

Last month, in Chipata, in the Eastern province, police intercepted a truck laden with Mukula trees enroute to neighbouring Malawi. Over 1,000 Mukula logs, suspected to have been illegally cut in Vubwi District in Eastern province, were being transported to Malawi without clearance.

And in April, a Lands, Natural Resources, and Environmental Protection team impounded a truck laden with Mukula logs in Rufunsa.

According to a government forestry officer based in Lusaka, who spoke to IPS on the condition of anonymity, there is the need for local policymakers to boost regulation and administrative capacity if they are to manage their forests and other natural resources sustainably.

He did point out that there was a significant loophole in Zambia’s Forests Act of 1973.

“The Forest Act number 39 of 1973, Chapter 199, is not effective as it allows harvesting any tree apart from species that bear fruits and those involved in the conservation of water near or around a water table.

“Against such a liberal law, people are free to harvest any species, even endangered ones, because the law allows that they be regarded as timber,” the expert said.

But Lands and Natural Resources and Environmental Protection Minister Mwansa Kapeya said the government intensified patrols and operations in areas where the illegal cutting down of the Mukula tree was rife.

He warned foreign nationals involved in the cutting and exporting of the Mukula tree that they risked going to jail and could be deported from Zambia.

“We are not just watching, we are reviewing policies on forestry and would also put in place a national strategy to address the levels of deforestation and illegal timber business,” Kapeya told reporters recently.

The government forestry officer pointed out that the root of combating the tree’s exploitation lies not in policies but in their implementation.

“Look at the Forestry Department for example; it is present in all the provinces and districts but the tools and equipment required to ensure sustainable forest protection and management including law enforcement are not available.

“We have suitable legislation but if practical application is not available then the policy or Act may not be effective.”

But according to Zambia-based Centre for International Forestry Research (CIFOR) researcher Davison Gumbo, there is the need for local policymakers to boost regulation like the Forests Act of 1973 and administrative capacity if they are to manage their forests and other natural resources sustainably.

“When there is no enforcement by government, people do as they see fit. With a higher level of enforcement, government would realise more revenues from the Mukula tree,” he told IPS.