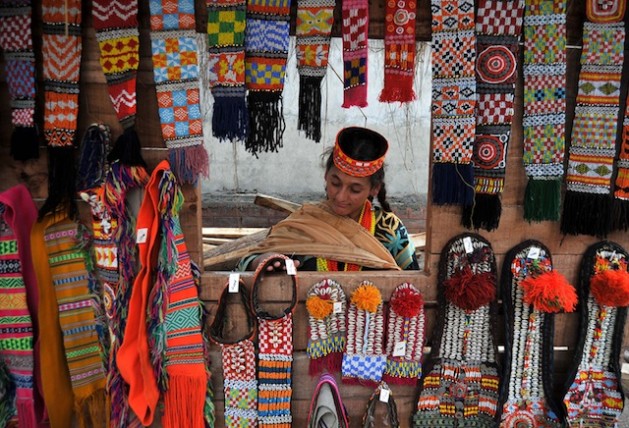 PESHAWAR, Pakistan, Sep 25 2014 (IPS) - Saleema Bibi graduated from medical school 15 years ago – but to this day, the 40-year-old resident of Peshawar, capital of Pakistan’s northern Khyber Pakhtunkhwa (KP) province, has never been able to practice as a professional.

“I wanted to get a government job, but my family wanted me to get married instead,” Bibi tells IPS. Now she is a housewife, with “strict in-laws” who are opposed to the idea of women working.

“I know the province is short of female doctors,” she adds. “And the salaries and other benefits for people in the medical profession are lucrative, but social taboos have hampered women’s desire to find jobs.”

"Social taboos have hampered women’s desire to find jobs.” -- Saleema Bibi, a medical school graduate.
According to the International Labour Organisation (ILO), gender disparities in labour force participation rates are severe in Pakistan, with male employment approaching 80 percent compared to a female employment rate of less than 20 percent between 2009 and 2012.

In the country’s northern, tribal belt, the situation is even worse, with religious mores keeping women confined to the home, and unable to stray beyond the traditional roles of wife, mother, and housekeeper.

What Saleema Bibi discovered in her late-20s was something most women who dream of a career will eventually encounter: endless hurdles to equal participation in the economy.

For instance, the health sector in KP, which has a population of 22 million people, employs just 40,000 women, while maintaining a male labour force of some 700,000, according to Abdul Basit, a public health specialist based in Peshawar.

He says the “shortage of women employees in the health sector is [detrimental] to the female population” and is the “result of male dominance and an environment shaped by the belief that women should stay at home instead of venturing out in public.”

Even though one-fifth of the country’s doctors are female, few of them are engaged in paid work. Hundreds of female students are enrolled in the public sector’s medical colleges, but KP only has 600 female doctors, compared to 6,000 male doctors, Noorul Iman, a professor of medicine at the Khyber Medical College in Peshawar, tells IPS.

Experts also say the proportion of women workers occupying white-collar jobs is very limited, since even educated women are discouraged from entering the public service.

According to the Pakistan Economic Survey for 2012-2013, women have traditionally populated the informal sector, taking up jobs as domestic workers and other low-paid, daily-wage professions as cooks or cleaners, where affluent families typically pay them paltry sums of money.

In contrast, their share of professional clerical and administrative posts has been less than two percent.

Research indicates that only 19 percent of working women had jobs in the government sector, while the economic survey reports that some 200,000 women in KP were actively seeking jobs in the 2010-2011 period.

The most popular jobs were found to be in medicine, banking, law, engineering and especially education.

“Because women can work in all-girls’ schools, without interacting with male students or colleagues, their families allow them to take up these posts,” Pervez Khan, KP’s deputy director of education, tells IPS, adding that the female-only environment provided by gender-segregated schools explains why women are attracted to the profession of teaching.

The provision of three months’ paid leave, as well as 40 days of maternity leave is yet another incentive to enter the education sector, he states.

The manufacturing sector does not fair any better. Muhammad Mushtaq, a leading industrialist in the province, says only three percent of the workforce in 200 industrial units around KP is comprised of women.

“Many people do not want women to mix with men in offices, and prefer for them to stay away from public places,” he tells IPS. This is a particularly disheartening reality in light of the fact that the number of girls in Pakistani universities, including in the northern regions, is almost equal to that of boys; despite their competitive qualifications, however, women are marginalised.

Mushtaq also believes that sexual harassment of women in their workplaces conspires with other forces to keep women from the payroll. About 11 percent of working women reported incidents of sexual harassment in the workplace, according to a 2006 study by the Peshawar-based Women’s Development Organisation.

Faced with mounting poverty in a country where 55 percent of the population of about 182 million earn below two dollars a day, while a full 43 percent earn between two and six dollars daily, many women are growing desperate for work, taking up positions in garment and food processing units, or entering the manufacturing sector where their embroidery skills are in high demand.

But this too, experts say, is predominantly temporary, contractual employment.

There is a kind of vicious cycle in which a lack of experience results in inadequate skills, which in turn fuels unemployment among women.

The situation is made worse by a nationwide female literacy rate of just 33 percent. While the female primary school enrollment rate is 70 percent, that number falls to just 33 percent for secondary-level education.

Muhammad Darwaish at the KP Employment Exchange Department says that only those women who head their households – either due to the death or debilitation of their husbands – are free to actively seek employment.

They too, however, fall victim to low wages and informal working conditions.

KP Information Minister Shah Farman tells IPS the government is committed to creating a safe working environment for women, which is free of harassment, abuse and intimidation with a view toward fulfillment of their right to work with dignity.

“We are bringing in a law on the principles of equal opportunity for men and women and their right to earn a livelihood without fear of discrimination,” he asserts.

Farman claims the KP government has launched a 10-million-dollar interest-free microcredit programme for women to enable them to start their own businesses.

“The programme, started in December 2013, seeks to reduce poverty through creation of self-employment and job opportunities for women,” he says.

Under the scheme, small loans worth anywhere from 1,000 to 2,000 dollars are being given to women who want to start embroidery, sewing and other home-based businesses.

It will continue for the next five years to bring women into the economic mainstream.

Pakistan is also bound to work towards gender equality by the targets set out in the internationally agreed-upon Millennium Development Goals (MDGs), which are due to expire next year.

The government has taken steps towards the goal of empowering women through a series of national-level initiatives including the establishment of crisis centres for women, the National Plan of Action, gender reform programmes and the Benazir Income Support Programme (BISP).

Still, women on average continue to earn less than men, while women only hold 60 seats compared to 241 seats occupied by men in the National Assembly.

Until women are allowed to fully contribute to the national economy, experts fear that Pakistan will not reach the goal of achieving gender equality.