HODGES BAY, Antigua, Oct 6 2014 (IPS) - Ruth Spencer is a pioneer in the field of solar energy. She promotes renewable technologies to communities throughout her homeland of Antigua and Barbuda, playing a small but important part in helping the country achieve its goal of a 20-percent reduction in the use of fossil fuels by 2020.

She also believes that small non-governmental organisations (NGOs) have a crucial role to play in the bigger projects aimed at tackling the problems caused by the burning of fossil fuels, such as coal, oil and gas.

“We are in a small island so we have to build synergies, we have to network, we have to partner to assist each other." -- Ruth Spencer

Spencer, who serves as National Focal Point for the Global Environment Facility (GEF)-Small Grants Programme (SGP) in Antigua and Barbuda, has been at the forefront of an initiative to bring representatives of civil society, business owners and NGOs together to educate them about the dangers posed by climate change.

“The GEF/SGP is going to be the delivery mechanism to get to the communities, preparing them well in advance for what is to come,” she told IPS.

The GEF Small Grants Programme in the Eastern Caribbean is administered by the United Nations office in Barbados.

“Since climate change is heavily impacting the twin islands of Antigua and Barbuda, it is important that we bring all the stakeholders together,” said Spencer, a Yale development economist who also coordinates the East Caribbean Marine Managed Areas Network funded by the German government.

“The coastal developments are very much at risk and we wanted to share the findings of the IPCC report with them to let them see for themselves what all these scientists are saying,” Spencer told IPS.

“We are in a small island so we have to build synergies, we have to network, we have to partner to assist each other. By providing the information, they can be aware and we are going to continue doing follow up….so together we can tackle the problem in a holistic manner,” she added. 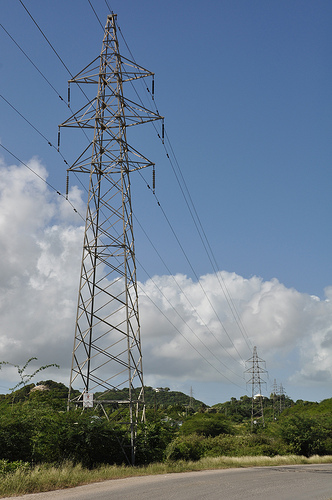 The United Nations’ Intergovernmental Panel on Climate Change (IPCC) has sent governments a final draft of its synthesis report, which paints a harsh picture of what is causing global warming and what it will do to humans and the environment. It also describes what can be done about it.

Ruleta Camacho, project coordinator for the sustainable island resource management mechanism within Antigua and Barbuda’s Ministry of the Environment, told IPS there is documented observation of sea level rise which has resulted in coastal erosion and infrastructure destruction on the coastline.

She said there is also evidence of ocean acidification and coral bleaching, an increase in the prevalence of extreme weather events – extreme drought conditions and extreme rainfall events – all of which affect the country’s vital tourism industry.

“The drought and the rainfall events have impacts on the tourism sector because it impacts the ancillary services – the drought affects your productivity of local food products as well as your supply of water to the hotel industry,” she said.

“And then you have the rainfall events impacting the flooding so you have days where you cannot access certain sites and you have flood conditions which affect not only the hotels in terms of the guests but it also affects the staff that work at the hotels. If we get a direct hit from a storm we have significant instant dropoff in the productivity levels in the hotel sector.”

Antigua and Barbuda, which is known for its sandy beaches and luxurious resorts, draws nearly one million visitors each year. Tourism accounts for 60 to 75 percent of the country’s gross domestic product, and employs nearly 90 percent of the population.

Like Camacho, Ediniz Norde, an environment officer, believes sea level rise is likely to worsen existing environmental stresses such as a scarcity of freshwater for drinking and other uses.

“Many years ago in St. John’s we had seawater intrusion all the way up to Tanner Street. It cut the street in half. It used to be a whole street and now there is a big gutter running through it, a ship was lodged in Tanner Street,” she recalled.

“Now it only shows if we have these levels of sea water rising that this is going to be a reality here in Antigua and Barbuda,” Norde told IPS. “This is how far the water can get and this is how much of our environment, of our earth space that we can lose in St. John’s. It’s a reality that we won’t be able to shy away from if we don’t act now.”

As the earth’s climate continues to warm, rainfall in Antigua and Barbuda is projected to decrease, and winds and rainfall associated with episodic hurricanes are projected to become more intense. Scientists say these changes would likely amplify the impact of sea level rise on the islands.

But Camacho said climate change presents opportunities for Antigua and Barbuda and the country must do its part to implement mitigation measures.

“If we retrain our population early enough in terms of our technical expertise and getting into the renewable market, we can actually lead the way in the Caribbean and we can offer services to other Caribbean countries and that’s a positive economic step,” she said.

“Additionally, the quicker we get into the renewable market, the lower our energy cost will be and if we can get our energy costs down, it opens us for economic productivity in other sectors, not just tourism.

“If we can get our electricity costs down we can have financial resources that would have gone toward your electricity bills freed up for improvement of the [tourism] industry and you can have a better product being offered,” she added.