Warmer Days a Catastrophe in the Making for Kenya’s Pastoralists 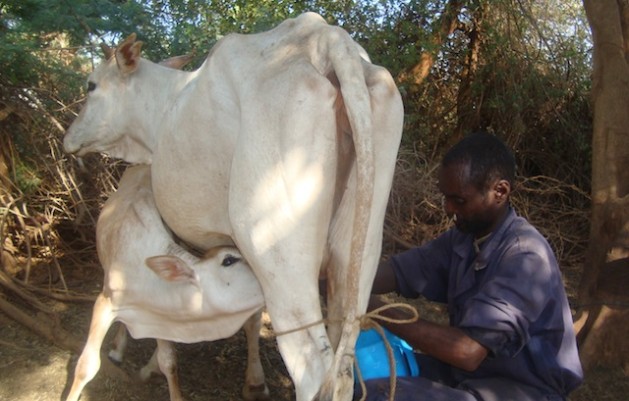 Arid and semi-arid lands account for about 80 percent of Kenya’s land. Most pastoralists live in these areas and keep over 60 percent of the country’s livestock population. Credit: Miriam Gathigah/IPS

NAIROBI, Oct 20 2014 (IPS) - Seif Hassan is a pastoralist from Garissa, Northern Kenya, some 380 kilometres outside of the capital, Nairobi. He sells his animals at the Garissa livestock market where, during a good season, pastoralists can sell up to 5,000 animals per week and “it is a cash-making business.”

But as weather patterns become extreme with more frequent and prolonged dry spells, “life has become difficult for the pastoralist community,” he says.

Michael ole Tiampati, the national coordinator for the Pastoralist Development Network of Kenya, a network of organisations that support pastoralist development in this East African nation, tells IPS that during dry spells “an ox is sold for between 200 and 300 dollars, a heifer at 50 to 170 dollars, while a camel is sold at between 1,000 and 1,700 dollars.”

When the Intergovernmental Panel on Climate Change (IPCC) Fifth Assessment Report was released last month, it emerged that temperatures on the African continent, particularly in the more arid regions, are likely to rise more quickly than in other land areas.

Experts like Dr George Keya, assistant director for Range and Arid Lands Research, tells IPS that if the expected short rains in October fail, “we will be facing a catastrophe in arid and semi-arid areas where pastoralists live.”

Keya says that pastoralists are an extremely vulnerable group “because their capacity to cope with extreme and unpredictable weather changes is significantly low.”

This, he says, compounded with their few livelihood options, makes the community extremely vulnerable.

As arid and semi-arid rangelands face warmer days, with frequent heat waves as predicted by the IPCC report, it poses an increased risk to the livelihoods of the pastoralist community.

Tiampati says that while in the past droughts would occur every 12 years, “we are now experiencing droughts every two to three years.”

As a result, “lands have insufficient time to recover. Pastoralists are also no longer able to practice herd splitting to protect their herds from climate change.”

Herd splitting is where pastoralists divide their herds into groups and take them to different areas with less-severe weather changes.

“But now climate change is affecting arid lands in a uniform manner, and there is no place to shelter the herds,” Tiampati says.

“Drought brings Peste des Petits Ruminants (PPR) — a contagious disease that affects goats and sheep. The disease is also trans boundary and can move easily from Northern to Southern Kenya and beyond,” he says.

He adds that it is not just rising temperatures that pastoralists have to contend with, but torrential rains and consequent flooding.

Keya says that East Coast Fever, a disease that infects cattle, sheep and goats and which is caused by ticks, occurs during floods and is just as threatening as PPR.

“These diseases add to the vulnerability of the pastoralist community.”

Keya says that pastoral systems as they are cannot withstand climate change. He says that Vision 2030 — Kenya’s economic blueprint to move from a low- to a middle-income country — lays out a strategy to establish livestock disease free zones. But this is yet to be implemented.

“Pastoralists believe in keeping large herds and disposing of them when they are convinced that the situation is too dire for the animals to survive. We have seen them sell emancipated mature animals for a mere five dollars,” he says.

Tiampati says that pastoralists must begin to see that livestock keeping “as more than a way of life, they need to begin being more commercially oriented.”

“Losing an animal that they have reared for years is usually a hard blow,” he says.

“There is sufficient land for investors to set aside large areas where animals can be bought from pastoralists and fattened within three months and either consumed locally or exported,” Keya says.

He says that Kenya has a beef deficiency with “about 40 percent of our beef com[ing] from neighbouring countries.”  He says that it can easily be met by assisting pastoralists better manage their livestock.

Tiampati says that pastoralists need assistance in diversifying their livelihoods. He says that in some arid areas, such as in Laikipia in Rift Valley region, women are making good use of the aloe vera plant, which grows in arid areas, to make soap.

Keya says that also in the Rift Valley region, in Narok, pastoralists are making good use of the highlands and lowlands.

“During the rainy seasons, pastoralists are farming in highlands and keeping their animals in lowlands. While in dry spells, they take the animals to the highlands to feed on fodder from the harvest as the lowlands recover,” he says.

While the IPCC report predicts very tough times ahead for the pastoralist community, experts are convinced that with the right interventions, the Kenyan pastoralist will survive the vagaries of nature.

“Without these [interventions], we are watching a catastrophe in the making,” Keya says.