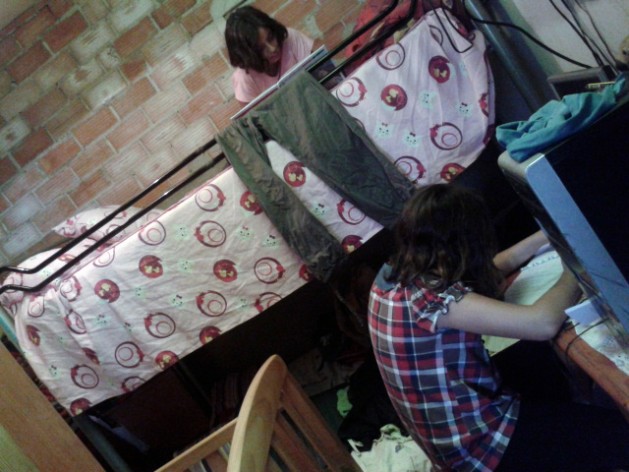 Estefanía reads in the top bunk while Encarni does homework on a table in her small room. This 12-year-old girl from Málaga is one of the faces of child poverty, which according to a new UNICEF report affects 36.3 percent of children in Spain. Credit: Inés Benítez/IPS

MÁLAGA, Spain, Nov 1 2014 (IPS) - “I would like to have a big house, and I wish my family didn’t have to go out and ask for food or clothes,” Encarni, who just turned 12, tells IPS in the small apartment she shares with five other family members in a poor neighbourhood in the southern Spanish city of Málaga.

This girl with shoulder-length straight brown hair, brown eyes and broad forehead is one of the faces of child poverty in Spain, which has grown 28.5 percent since 2008, according to a report released Tuesday Oct. 28 by the United Nations children’s fund, UNICEF.

The report, “Children of the Recession”, which studied 41 industrialised nations, says child poverty in Spain climbed from 28.2 percent in 2008 to 36.3 percent in 2013. It includes Spain on the list of countries hardest hit by the economic crisis, along with Croatia, Cyprus, Greece, Ireland, Italy and Portugal.

Almost every day in the middle of the afternoon Encarni goes with her mother and her aunt to get food at the Er Banco Güeno, a soup kitchen run by the community in the Palma-Palmilla neighbourhood.

The soup kitchen has been operating for the last two years in what used to be a bank, which the local residents occupied for this purpose. They serve three meals a day to the needy.

“I worked in construction until the start of the 2008 crisis, when I was laid off,” Encarní’s stepfather, Antonio Delgado, tells IPS. Since then he has not found work, and has done a little of everything, ”from picking up junk to selling things in street markets.”

Antonio, with a lean face and teeth that have seen better days, brings in a few euros a day fixing things using a soldering machine and a tire pump, which he keeps in a corridor off the street, where several bird cages hang at the entrance.

Encarni explains that her mother, Inmaculada Rodríguez, found work for a couple of months taking care of an elderly person, but was fired.

The unemployment rate in this country of 47 million people currently stands at 23.6 percent. But in the autonomous community or region of Andalusia, where Málaga is found, it is 35.2 percent, according to the national statistics institute, INE.

“I really like to go to school. I especially love gymnastics,” Encarni says, with her sweet voice, although she adds that she gets sad when she feels they leave her out sometimes, “because they saw me go into the soup kitchen for food. But I just ignore them,” she adds, with a wan smile. 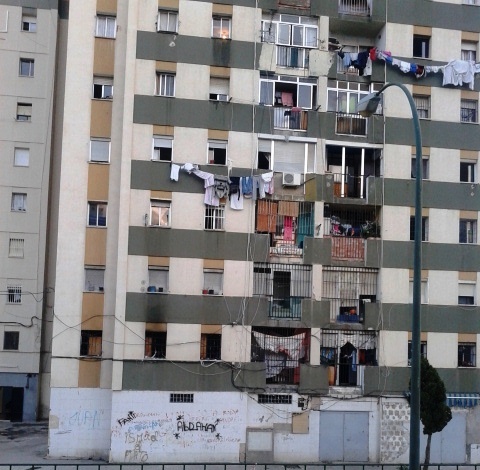 One of the apartment blocks in Palma-Palmilla, the poor neighbourhood in the southern Spanish city of Málaga where Encarni and her family live. Credit: Inés Benítez/IPS

A few days ago her aunt and three cousins moved to another house nearby. But until then there were 11 people living in Encarni´s house, the family said when they described their day-to-day life to IPS.

She slept in the top bunk with her cousin Estefanía, who is a year older than her. In the bottom bunk slept her aunt Ana María and her nine-year-old cousin Juan José. Encarni’s two-and-a-half-year-old cousin Ismael slept next to them in a crib.

Encarni’s mother, her stepfather, and four other members of her family slept in the rest of the rooms of the house, which only has one small bathroom which you reach by ducking under a clothesline, where the recently washed clothes are being dried by a fan, near the kitchen.

Estefanía and Ismael suffer from epilepsy, says their mother Ana María, who is unemployed and shows IPS the box where she keeps the medications that they have to take every day.

She goes on to ask: “Where do rich people get their money?”

According to the report “Even it Up: Time to End Extreme Inequality” by the international relief and development organisation Oxfam, the richest one percent of Spaniards have as much wealth as 70 percent of the entire population.

The report also says the number of billionaires around the world doubled to 1,645 as of March 2014, from 793 in March 2009, demonstrating that the rich actually benefited from the economic crisis.

Spain, in particular, is one of the 34 countries of the Organisation for Economic Cooperation and Development (OECD) where inequality between rich and poor grew the most during the crisis, according to its Society at a Glance 2014 report.

Between 2007 and 2010, the income of the poorest 10 percent of the population of Spain fell 14 percent, while of the other OECD countries it only dropped more than five percent in Mexico, Greece, Ireland, Estonia and Italy, and did not drop more than 10 percent in any other country.

Encarni wants to be a judge when she grows up. But she says that for now she would be happy just to be able to “dress well” and be able to buy more things in the supermarket.

“Everything we have was given to us because my parents don’t have enough money,” she explains, pointing to the clothes folded on the shelves, the packages of rice and lentils on a high shelf, and even the backpack that a neighbour gave her for school, where she eats lunch every day free of charge because she comes from a low-income family.

Encarni has fun skipping rope, playing Chinese jump rope and goofing off on the swings near her house. She also likes it when her stepfather gives her a ride on his bike.

She likes candy too, and enhoys singing and dancing with her cousin Estefanía, who swam in the sea this summer for the first time in her life, even though she lives only a few kilometres from the beach. “The water tasted salty,” Estefanía tells IPS.

The new UNICEF study warns that 2.6 million children have fallen into poverty as a result of the economic crisis in the most affluent countries, bringing the total number of poor children in the industrialised North to 76.5 million.

With her hair loose and recently combed, sitting on a bed near a window while the TV spits out news on the latest corruption scandals in the country, Encarni hugs her little cousin Ismael, who clasps a piece of bread in his hand while they wait for night to fall.