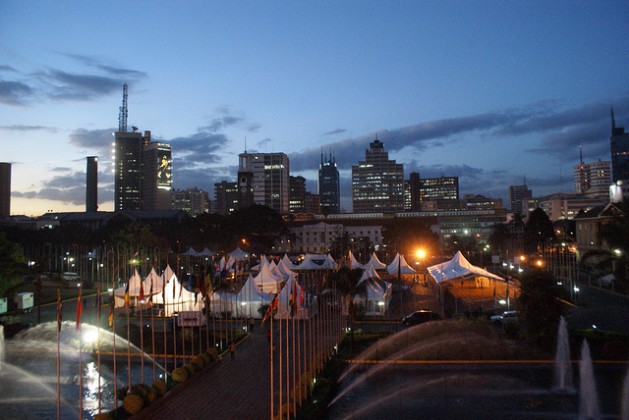 Though Kenya has posted a strong economic performance, resulting in a recent middle income bracketing, experts say that achieving the targeted double-digit economic growth rate will not be easy. Credit: Isaiah Esipisu/IPS

NAIROBI, Nov 11 2014 (IPS) - Each year on Dec. 10, Lucy Mwende and her two children hop aboard a night bus and travel to the white sandy beaches and warm waters of Kenya’s Indian Ocean, some 441 km from the capital, Nairobi.

But this year they will miss that bus because Mwende says, “crowded places increase the risk of terror attacks.”

The most recent attacks were on Nov. 2 when an army barracks in the port city of Mombasa and a police station in the tourist resort of Malindi, both in Coastal region, were attacked by suspected separatist group the Mombasa Republican Council.

Kenya’s coast is a leading tourist destination and attacks there have hit the tourism sector hard. Earnings from tourism have fallen for three years in a row.

The country earned 1.05 billion dollars from tourism in 2013, down from 1.06 billion dollars in 2012. Even though the drop appears marginal, government statistics show that a poor performance by the tourism sector in the second quarter of the year slowed down economic expansion to 5.8 percent compared to 7.2 percent in a similar period last year.

Though Kenya has posted a strong economic performance, which resulted in its recent reclassification to a middle income country, experts say that achieving the targeted double-digit economic growth rate, an increase from the current 5.7 percent, will not be easy.

All sectors are required to contribute in catapulting this East African nation’s economic growth, and there is increasing concern on the impact of insecurity on this growth.

“[The government] must become more proactive in addressing security lapses in a manner that will instil investor confidence,” David Owiro, from local think tank Institute of Economic Affairs, tells IPS.

Some sectors are more sensitive to insecurity and the impact to the economy is immediate, he says.

Danson Mwangangi, an economist in East Africa, tells IPS that insecurity, low rainfall and fiscal expansion are also some of the key challenges that the country will “first have to overcome”.

While grappling with insecurity, Mwangangi says, the government must also find ways to overcome its fiscal expansion challenges.

Fiscal policy is a plan that the government sets in regard to taxation and spending and fiscal expansion occurs when the government “decides to either spend more or lower on taxes.”

Although there are several fiscal policies in place to attract foreign direct investment, Owiro says that they are largely in-operational because they were not properly designed.

These policies were designed to ensure that the revenue received by the government is more than what is foregone in taxes.

For instance, capital allowance allows foreign investors to deduct the sum capital that they invested in the country from their tax payments, so that they are taxed less.

“For investors to qualify they had to invest outside Nairobi yet infrastructure connectivity and markets are best in Nairobi. This requirement has discouraged investors,” Owiro says.

Further, tax holidays, where foreign investors are exempted from paying taxes for a period of time have also not worked.

“Foreign investors were required to set up in the Export Processing Zones (EPZ), to manufacture for export. The main idea was to profit from the African Growth and Opportunity Act (AGOA),” Owiro says.

AGOA provides trade preferences for quota- and duty-free entry into the United States for certain goods.

These goods, however, fall within the textile industry. “We do not grow any textile, our cotton industry is dead, most of the textiles we do are re-exports, such as importing cotton with a view to export,” Owiro says.

Kenya therefore ended up with an EPZ that has only a handful of firms as opposed to an industry, he says.

Dinah Mukami of the local lobby group Bunge la Wananchi tells IPS that the government must address the country’s high unemployment rates so that “more people have money in their pockets.”

According to the Institute of Economic Affairs, open unemployment (where people who are unable to find work) is at 12 percent. When you look at the number of people who are underemployed or in seasonal employment, the figure is as high as 44 percent of the workforce.

“Nearly half of the workforce is not fully employed. We have to begin finding opportunities for these people,” Owiro explains.

Young people are adversely affected by unemployment. According to Owiro, for every adult beyond the age of 35 without a job, Kenya have two youthful persons who are unemployment.

But the government can only create a limited number of jobs.

What the country needs is a critical mass of competitive entrepreneurs with an interest in the domestic, regional and international markets “who can create a class of jobs that the government cannot,” Owiro says.

According to Mukami, the system of governance here has a direct impact on the economy.

Since 2013, the country has been implementing a devolved system of governance “bringing the government closer to the people as opposed to a single central national government that sits in the capital, Nairobi,” Mukami says.

Devolution held great promise for ordinary people as it was expected to foster inclusive growth, address inequality and unemployment.

“Human resource and technical support were meant to be devolved from the national to the county governments or the grassroots where they are most needed,” Mukami says.

But instead there is a duplication of jobs, a bloated wage bill, corruption as well as low absorption rates, Owiro says.

Mwangangi says that to cushion the agricultural sector from severe climate changes, the government needs to raise about 12.76 billion dollars —  equivalent to the 2013/2014 national budget — to finance a five-year climate change adaptation and mitigation plan.

Without these needed interventions, Mwangangi says, the challenges various sectors are facing could negate the country’s strong economic performance.