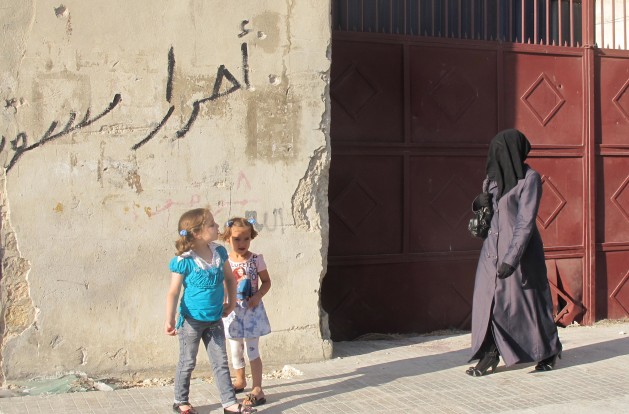 Two young girls look on as a veiled woman passes by in Aleppo, August 2014. Syrian magazine Saiedet Souria wants to provide women with the information they need to have a wider view on the world and a voice in a revolution that has largely left their views unheard. Credit: Shelly Kittleson/IPS

GAZIANTEP, Turkey, Nov 15 2014 (IPS) - For most Syrian women, the war has been a disaster. For some, it has also been liberating.

For Yasmine Merei, managing editor of the Syrian women’s magazine Saiedet Souria, the upset of traditional family roles and the shaking off of a culture of fear have wrought positive effects.

Many Syrian women have unfortunately been forced to become the breadwinners of their families, with their husbands missing, in jail, injured or killed, she told IPS, but while fending for themselves can be a terrifying experience, it can also free women from the traditional bonds placed on them.

Although it [Syrian women’s magazine Saiedet Souria] does not shy away from stories of women who have suffered greatly … [it] wants mainly to provide women with the information they need to have a wider view on the world and a voice in a revolution that has largely left their views unheard
‘’If he [the husband] isn’t the one who pays for everything and has that specific role in society, he no longer has the right to tell you what to do’’, added Mohammad Mallak, the founder and editor-in-chief of the magazine, which translates as ‘Syrian Women’, and was founded early this year.

Mallak also runs a partner magazine, Dawda (‘Noise’), from the same office in the southern Turkish city of Gaziantep.

Few of the women in the magazine’s photos have their heads covered, and Merei took off her headscarf earlier this year, after wearing it ‘’for about twenty years’’ as part of her upbringing in a poor, conservative Sunni family.

Merei said that she started taking part in the 2011 protests due to the unjustness of Syrian law, especially as concerns women. As examples, she noted a longstanding law against Syrian women giving citizenship to their children and widespread, unpunished honour killings.

A former Master’s student in linguistics, Merei – like many Syrian women – has become responsible for providing for her immediate family, sending money to her mother and her brothers, both of whom were jailed for protesting and released only after large bribes were paid.

Her elderly father died shortly after he, too, had been imprisoned and the family forced to flee their home.

Telling women’s stories does not simply mean female victims recounting the horrors and hardships of their lives, however.

Although it does not shy away from stories of women who have suffered greatly, Merei wants mainly to provide women with the information they need to have a wider view on the world and a voice in a revolution that has largely left their views unheard.

A first-hand account from a woman who was tortured in Syrian regime prisons sits alongside a review of Germaine Greer’s ‘The Female Eunuch’ and an interview with a female police officer in opposition-held areas in the pages of the magazine and on its Facebook page.

Articles on how forced economic dependence negatively affects both women and national economies overall, others discussing potential health problems found in refugee camps such as tuberculosis, a regular column by a female lawyer still in regime areas who previously spent 13 years in prison for political reasons and two translated articles from international media give breadth to the magazine’s roughly 50 pages per issue.

Saiedet Souria publishes sections of the Convention on the Elimination of All Forms of Discrimination against Women (CEDAW) – the ‘’international bill of rights for women’’ adopted by the U.N. General Assembly in 1979 – in every issue, and will publish it in its entirety in the next, she said.

The magazine itself only has a print run of between 4,500 and 5,000 copies per issue (with roughly 3,500 distributed inside Syria through one of its four offices), bit its Facebook page where the articles are regularly posted is followed by over 40,000.

For a country where Facebook and Youtube were banned from 2007 until early February 2011, and where internet and electricity are scarce, this is a significant number. Syria has been on Reporters Without Borders’ Internet enemies list since the list was established in 2006.

In addition to offices in Daraa, Damascus, Suweida and Qamishli, another will soon be opened in Aleppo, Merei said.

‘’All of the ten women who work for us inside get a regular salary of 200 dollars,’’ she explained, ‘’and are responsible for distributing the copies as well as bringing women together for meetings and similar initiatives.’’

The copies are given out at markets and local councils, and in at least one location, noted Merei, the women have a system to recirculate the limited copies once they have finished with them.

Reporters Without Borders has held two workshops for the magazine, in April and September of this year, and offered to donate equipment to the magazine, but ‘’ we had basic equipment – regular printers, computers’’ from an initial investment made by Mallak,  she said.

‘’But what we really needed was paper and ink, to get the magazine to as many women as possible. And so RSF made an exception and offered us that, instead.’’

The goal, she said, is to ‘’help Syrian women regain confidence in themselves.’’

A confidence undermined by the war and by the use of ‘religion’ to control women in Islamist areas which, when she last went to them earlier this year, ‘’seemed like the country had gone back to the Stone Ages.”

‘’I am a Sunni Muslim but the Islam there is not like any I know.’’

‘’One of the major problems is that Syria’s intelligentsia are all either in jail, abroad or dead,’’ one Syrian, who has lived most of his life abroad but came back recently to help try to set up university classes in opposition-held Aleppo, told IPS. ‘’There is almost no one to structure anything, no one to put forward ideas.’’

This is what the magazine and it correlated activities are trying to address, as well, Merei said. ‘’We are trying to give Syrians the knowledge they are going to need in the future,’’ she said.