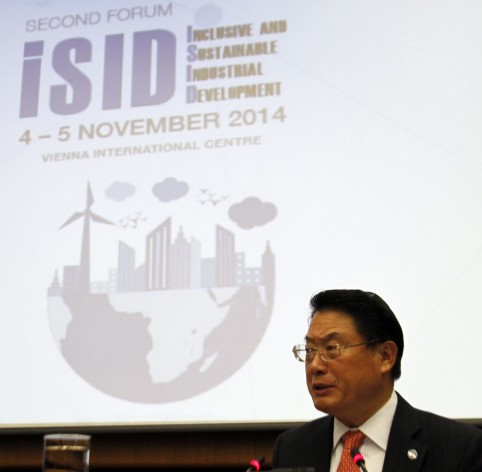 VIENNA, Nov 6 2014 (IPS) - The United Nations Industrial Development Organisation (UNIDO) has come a long way since 1997, when it faced the risk of closure in the aftermath of the end of the Cold War.

At that time, it was threatened with the withdrawal of Canada, the United States – its largest donor – as well as Australia on the grounds that the private sector was better suited to foster industrial development than an inter-governmental organisation.

Nearly one-and-a-half year after UNIDO’s 53-member Industrial Development Board appointed LI Jong – who had served as China’s Vice-Minister of Finance since 2003 – as Director General, the organisation is set to respond to post-2015 global development priorities by treading the path to inclusive and sustainable industrial development (ISID).

“We have a vision of a just world where resources are optimised for the good of people. Inclusive and sustainable industrial development can drive success" – U.N. Secretary-General Ban Ki-moon
It was not surprising therefore that some 450 participants from 92 countries, including Heads of State and government, ministers, representatives of bilateral and multilateral development partners, agencies of the United Nations system, the private sector, non-governmental organisations and academia, joined hands to interact at UNIDO’s Second ISID Forum on Nov. 4 and 5 at the United Nations headquarters in Vienna.

The first Forum was convened in June 2014, at which government officials and key policy-makers exchanged views on policies and ISID instruments and examined what had worked in one country and could inspire another.

“The promotion of inclusive and sustainable industrial development is a very clear mandate given by our Member States at the General Conference of UNIDO in Lima, Peru, last December,” LI told the Forum on Nov, 4.

“Since then, we have been implementing the new mandate in various ways … Today we send a strong statement: technical assistance cannot remain isolated from the main forces that shape the course of progress in your countries. We have to combine our efforts to enhance the developmental impact of our endeavours. Together we will grow; the partnership will make us stronger.”

The rationale behind the UNIDO Director General’s thinking is obvious. Strategic partnerships are the best response to increasingly complex development challenges because there is no single development strategy and no single actor that can address all the social, environmental and economic challenges the world faces today.

U.N. Secretary-General Ban Ki-moon also believes that “the overarching imperative for our planet’s future is sustainable development.” In opening remarks to the Second Forum, Ban said:  “We have a vision of a just world where resources are optimised for the good of people. Inclusive and sustainable industrial development can drive success.”

Amid applause, Ban added that among the main area of action – climate change – presents an opening for inclusive and sustainable industrial development.

“Smart governments and investors are exploring innovative green technologies that can protect the environment and achieve economic growth. For industrial development to be sustainable it must abandon old models that pollute. Instead, we need sustainable approaches that help communities preserve their resources,” he said.

The programmes are based on close analysis and insights gained by UNIDO experts during visits to the two countries in the course of the previous months. They have identified a number of strong partners, both local and international, and accordingly designed the two partnership programmes. 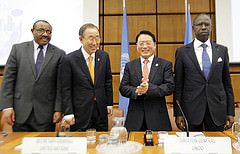 UNIDO’s work in the field of inclusive and sustainable industrialisation in Africa was lauded by Ethiopian Prime Minister Hailemariam Desalegn and Senegalese Prime Minister Mahammed Dionne.

Commending the creation of the new partnership approach, Prime Minister Desalegn said that inclusive and sustainable industrialisation would help his country develop. He said Ethiopia was looking forward to enhancing its economic transformation and that such a partnership model will help implement this vision.

Prime Minister Dionne said economic growth must lead to the eradication of poverty and address the problem of unemployment, adding that inclusive and sustainable industrialisation would help implement Senegal’s development plan by providing the collective action needed to make it happen.

Director General Ll assured the two prime ministers that “UNIDO is fully committed to supporting the governments of Ethiopia and Senegal in implementing the two programmes.”

“These pilot programmes,” he said, “mark the beginning of a larger, more comprehensive and ambitious approach to how UNIDO undertakes technical cooperation with and for Member States to support their industrialisation agenda.”

“If we want to achieve the scale of development needed, we have to explore the full potential of inclusive and sustainable industrial development,” Ll added.

“We have to strengthen productive capacities. We must build enterprises. We must reach out to farmers and entrepreneurs, and promote economic diversification and structural transformation based on adding value to the natural resources of these countries.”

The need for moving away from activities that are low value-added and low-productivity to activities that add more value and boost productivity was explained by the U.N. Secretary-General at the high-level thematic roundtable of the United Nations Conference on Landlocked Developing Countries (LLDCs) on Nov. 3 in Vienna.

There, Ban said: “Think of a coffee bean, just a simple coffee bean. All LLDCs can sell just a coffee bean as it is. But more developed creative countries … grind this coffee bean and sell as a manufactured product at a much higher price.

“The same with unprocessed minerals. Lots of developing countries … sell minerals just as they are. Many foreign companies come and bring all these minerals, and then they sell back with processed manufactures, [at a] much higher [price]. Then with their own mineral resources they have to buy, they have to pay a lot of money.”

ISID takes into account factors such as the structural and knowhow bottlenecks faced by developing countries by “the mobilisation of partners and their resources to synergise with UNIDO’s technical cooperation”, LI told the ISID Forum.

Commenting on the agreed cooperation with Ethiopia and Senegal, he said: “I would say that these two pilot programmes for country partnership mark the beginning of a larger, more comprehensive and more ambitious approach of how UNIDO undertakes technical cooperation with and for Member States to support their industrialisation agendas.”

“Together with our partners, we will finalise the planning of the partnership country programmes, based on the inputs we receive in this Forum.”

Those inputs included recognition that the concerns and development objectives of countries seeking international support must be taken into account and that there is no alternative to public-private partnerships.

These partnerships, participants agreed, must aim at eradication of poverty and not maximisation of the profits of the private corporations involved in such partnerships.