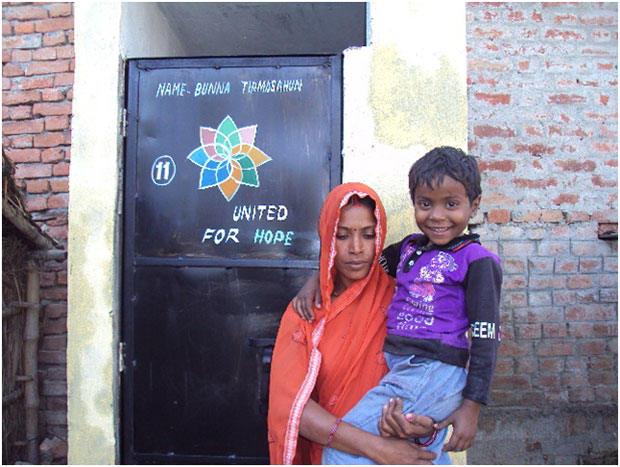 Radha’s family has received one of the 50 household toilets provided by German-based organization United for Hope. The waiting list in 2,500 people strong Tirmasahun is still long.

Due to a major lack of toilets, some 600 million Indians are forced to defecate in the open. In rural India, this figure is as high as 65 percent. In addition to these shocking numbers, there are more mobile phones in the country than toilets.

India’s sanitation problem is, most of all, a problem for the nation’s female population. Open defecation not only spreads diseases like cholera or E. coli and contaminates unprotected water sources, but also exposes women to the risk of being harassed or raped, when they rise at night or before dawn in search of a little privacy to attend to their toiletry needs in the fields.

Furthermore, women and girls in rural India have limited access to feminine hygiene products as well as the day to day challenge of where to dispose of their makeshift pads.

When Irish marketing manager Tara McCartney first travelled to India in 2011, she immediately felt a sense of belonging. She concluded that her 10 year corporate career would not make the world a better place, quit her job and founded the non-governmental organisation (NGO) United for Hope in Munich, Germany in December 2013.

Since then, she has built a team of about 25 highly qualified volunteers plus one employee in India who are working together to improve living conditions in the village of Tirmasahun, Uttar Pradesh.

“At United for Hope, we are committed to communities over the long-term and there is nothing more fundamental to prosperity and sustainability than access to clean water and sanitation”, says Tara McCartney, director of United for Hope.

Tirmasahun, located in Eastern Uttar Pradesh, some 30 km away from the next major town, is a village of about 2,500 inhabitants and is representative of the aforementioned sanitation crisis. It is a typical agricultural village with poor infrastructure, limited access to electricity and clean water, a major lack of toilets and two dilapidated schools.

United for Hope has adopted the village of Tirmasahun in order to create a sustainable development model, which can then be replicated for other Indian villages.

“Challenges at the village level are complex and inter-dependant and this is why we work in a holistic approach. While school attendance is a great thing, its limited in its impact if a child is still drinking dirty water and has no access to a toilet”, McCartney told IPS.

Sustainability is the key to creating scalable and lasting impact. United for Hope works across five core pillars: water and sanitation, renewable energy, education, women empowerment and alternative income generation for the villagers.

So far, United for Hope has successfully built toilets for 50 families, set up solar street lights around the village, carried out basic repair work in the two schools and purchased land for the next project phase. This land will be used for building a community centre which will serve as a meeting point for the villagers and as a base for delivering educational and awareness programs.

United for Hope aims to achieve its goals by working with the local government, the community and the environment. The organisation wants to serve as a facilitator. Community members need to be involved in decision making processes and acquire all skills that are necessary for creating an impact that lasts.

As the waiting list for toilets in Tirmasahun is long, preference is given to households with more female members.

One way of ensuring sustainability is the participation model, which has proven to be successful so far: all recipients contribute 10 percent of the cost of the toilet.

In order to ensure that the toilets are being used correctly, United for Hope regularly conducts workshops and WASH campaigns. The organisation has placed a teacher in one of the schools to carry on its programmes, especially around topics like proper hand washing.

WASH stands for Water, Sanitation and Hygiene and is a programme aimed at raising awareness around proper hygiene and sanitation usage.

Other villages in India have launched similar programmes. The village of Punsari in Gujarat is comparable to Tirmasahun: 6,000 inhabitants, far away from the next big city, a huge sanitation problem, lack of street lights and two primary schools.

In 2006, when Himanshu Patel became the new village head, Punsari began its transformation, which was supported by then State Chief Minister Narendra Modi, currently Prime Minister of India.

Their aim was to stop mass migration from villages to big cities and they were successful, investing about $ 2.28 million in the development of Punsari between 2006 and 2012.

Meanwhile, every household in Punsari has a toilet and a drainage system, the village has two functioning primary schools, a primary health centre and street lights around the village.

Two very different approaches with the same effect: if the Indian state and national or international NGOs work hand in hand, the concept of these model villages will be adopted across India contributing to resolving rural India’s sanitation woes.