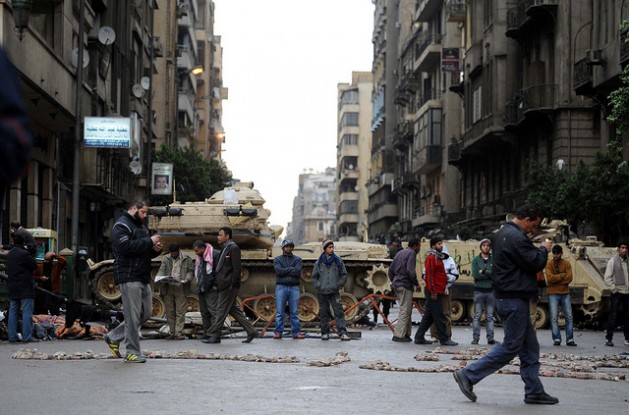 WASHINGTON, Dec 3 2014 (IPS) - The acquittal of former Egyptian President Muhammad Hosni Mubarak is not a legal or political surprise. Yet it carries serious ramifications for Arab autocrats who are leading the counterrevolutionary charge, as well as the United States.

The court’s decision, announced Nov. 29 in Cairo, was the last nail in the coffin of the so-called Arab Spring and the Arab upheavals for justice, dignity, and freedom that rocked Egypt and other Arab countries in 2011.

Chief Judge Mahmud Kamel al-Rashidi, who read the acquittal decision, and his fellow judges on the panel are holdover from the Mubarak era.

The Egyptian judiciary, the Sisi military junta, and the pliant Egyptian media provided the backdrop to the court’s ruling, which indicates how a popular revolution can topple a dictator but not the regime’s entrenched levers of power.

Indeed, no serious observer of Egypt would have been surprised by the decision to acquit Mubarak and his cronies of the charges of killing dozens of peaceful demonstrators at Tahrir Square in January 2011.

Arab autocrats in Egypt, Saudi Arabia, Bahrain, the United Arab Emirates, and elsewhere have worked feverishly to stamp out all vestiges of the 2011 revolutions. They have used bloody sectarianism and the threat of terrorism to delegitimise popular protests and discredit demands for genuine political reform.

The acquittal put a legal imprimatur on the dictator of Egypt’s campaign to re-write history.

Following the 2013 coupe that toppled President Mohamed Morsi, who is still in jail facing various trumped up charges, Arab dictators cheered on former Field Marshall and current President Abdel Fattah al-Sisi, lavishing him with billions of dollars. They parodied his narrative against the voices—secularists and Islamists alike—who cried out for good governance.

Regardless of how weak or solid the prosecution’s case against Mubarak was, the court’s ruling was not about law or legal arguments—from day one it was about politics and counter-revolution.

The unsurprising decision does, however, offer several critical lessons for the region and for the United States.

Removing a dictator is easier than dismantling his regime

Arab authoritarian regimes, whether dynasties or presidential republics, have perfected the art of survival, cronyism, systemic corruption, and control of potential opponents. They have used Islam for their cynical ends, urged the security service to silence the opposition, and encouraged the pliant media to articulate the regime’s narrative.

In order to control the “deep state” regime, Arab dictators in Egypt and elsewhere have created a pro-regime judiciary, dependable and well-financed military and security services, a compliant parliament, a responsive council of ministers, and supple and controlled media.

Autocrats have also ensured crucial loyalty through patronage and threats of retribution; influential elements within the regime see their power and influence as directly linked to the dictator.

The survival of both the dictator and the regime is predicated on the deeply held assumption that power-sharing with the public is detrimental to the regime and anathema to the country’s stability. This assumption has driven politics in Egypt, Saudi Arabia, Bahrain, the United Arab Emirates, and several other countries since the beginning of the Arab Spring.

In anticipating popular anger about the acquittal decision, Judge Rashidi had the temerity to publicly claim that the decision “had nothing to do with politics.” In reality, however, the decision had everything to do with a pre-ordained decision on the part of the Sisi regime to turn the page on the January 25 revolution.

Dictatorship is a risky form of governance

Authoritarian regimes across the Arab world are expected to welcome Mubarak’s acquittal and the Sisi regime’s decision to move away from the pro-democracy demands that rocked Egypt in January 2011.

Bahrain’s King Hamad, for example, called Mubarak the day the decision was announced to congratulate him, according to the official news agency of the Gulf Arab island nation.

The New York Times has also reported that the Sisi regime is confident that because of the growing disinterest in demonstrations and instability, absolving Mubarak would not rile up the Egyptian public.

If the Sisi regime’s reading of the public mood proves accurate, Arab autocrats would indeed welcome the Egyptian ruling with open arms, believing that popular protests on behalf of democracy and human rights would be, in the words of the Arabic proverb, like a “summer cloud that will soon dissipate.”

However, most students of the region believe Arab dictators’ support of the Sisi regime is shortsighted and devoid of any strategic assessment of the region.

Many regional experts also believe that popular frustration with regime intransigence and repression would lead to radicalisation and increased terrorism.

The rise of Islamic State (ISIS or IS) is the latest example of how popular frustration, especially among Sunni Muslims, could drive a terrorist organization.

This phenomenon sadly has become all too apparent in Egypt, Bahrain, Syria, Iraq, Yemen, Libya, Algeria, and elsewhere. In response to popular resistance, however, the regimes in these countries have simply applied more repression and destruction.

Indeed, Sisi and other Arab autocrats have yet to learn the crucial lesson of the Arab Spring: People cannot be forced to kneel forever.

Focused on Sisi’s policies toward his people, Arab autocrats seem less attentive to Washington’s policies in the region than they have been at any time in recent decades.

They judge American regional policies as rudderless and preoccupied with tactical developments.

Arab regimes and publics have heard lofty American speeches in support of democratic values and human rights, and then seen US politicians coddle dictators.

Yet while Mubarak’s acquittal might soon fade from the front pages of the Egyptian media, the Arab peoples’ struggle for human rights, bread, dignity, and democracy will continue.

Sisi believes the US still views his country as a critical ally in the region, especially because of its peace treaty with Israel, and therefore would not cut its military aid to Egypt despite its egregious human rights record. Based on this belief, Egypt continues to ignore the consequences of its own destructive policies.

Now might be the right time, however, for Washington to reexamine its own position toward Egypt and reassert its support for human rights and democratic transitions in the Arab world.