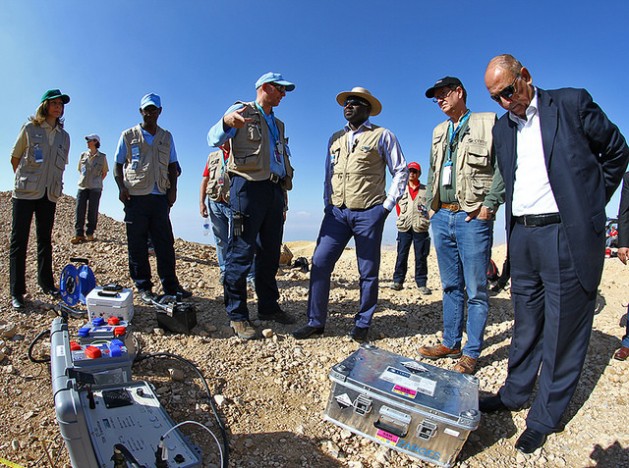 CTBTO Head Lassina Zerbo overseeing the equipment in use during IFE14. Photo Courtesy of CTBTO

The Integrated Field Exercise IFE14 in Jordan from Nov. 3 to Dec. 9 involved four years of preparation, 150 tonnes of specialised equipment and over 200 international experts.

“IFE08 was only a test drive around the block – now we’ve been on the Autobahn.” -- IFE14 Exercise Manager Gordon MacLeod

According to CTBTO Executive Secretary Lassina Zerbo, “Through this exercise, we have shown the world that it is absolutely hopeless to try to hide a nuclear explosion from us. We have now mastered all components of the verification regime, and brought our on-site inspection capabilities to the same high level as the other two components, the 90 percent complete network of monitoring stations and the International Data Centre.”

During the five-week long simulation exercise, the inspection team searched an area of nearly 1,000 square kilometres using 15 of the 17 techniques permissible under the Comprehensive Nuclear-Test-Ban Treaty (CTBT).

Some of these state-of-the-art techniques were used for the first time in an on-site inspection context, including equipment to detect traces of relevant radioactive noble gases on and beneath the ground as well as from the air. Other techniques scanned the ground in frequencies invisible to the human eye.

Key pieces of equipment were provided by CTBTO member states as voluntary and in-kind contributions.

Throughout the inspection, the team narrowed down the regions of interest to one limited area where relevant features including traces of relevant radionuclides were successfully found.

“Once in the field, the team conducted overflights, put out a seismic network and undertook wide area ground-based visual observation as well as radiation measurements. This helped us narrow down the areas of interest to more than 20 polygons which we then inspected in more detail.

“In the end, we detected radionuclides relevant for the on-site inspection and indicative of a nuclear explosion. At this location, the team also applied geophysical methods to find signatures (tell-tale signs) consistent with a recent underground nuclear explosion.”

The exercise also tested the CTBTO’s elaborate logistics system, which features specially developed airfreight-compatible containers that allow for field equipment, sensors or generators to be used straight from the containers. Thanks to a strict safety and security regime, not a single health or security incident occurred throughout the exercise.

IFE14 Exercise Manager Gordon MacLeod explained the need to test the on-site inspection regime in a comprehensive way: “Think of a car: all of the parts can be designed and built separately (engine, wheels, brakes, gearbox etc.) but if they are not put together and tested in an integrated manner, there is no guarantee that the car will function correctly and safely.

“For an On-Site Inspection, an additional layer of complexity derives from the human interaction and interpretations of the Treaty, Protocol, and Operations Manual as well as the perceptions, interpretations and actions of the individual inspectors.”

Praise for the host country

He said: “Jordan was chosen by CTBTO member states for its generosity in supporting the exercise and because of the special geological features of the Dead Sea region. By hosting IFE14, Jordan is reconfirming its role as an anchor of peace and stability in the region.

“I am inspired by the fact that His Majesty King Abdullah II of Jordan has generously placed the exercise under his royal patronage and grateful for the outstanding cooperation and hospitality from all branches of the Jordanian government.”

Jordan’s Prime Minister Abdullah Ensour described the proliferation of nuclear weapons as “a threat of nightmarish proportions for regional and global security” and stressed Jordan’s active support for the CTBT and its organisation by hosting IFE14.

“It fills me with pride that the other 182 CTBTO member states chose Jordan to host IFE14 in a competitive process. The Dead Sea provided the perfect topography and geology for a realistic and challenging on-site inspection simulation.”

Over the coming year, the CTBTO and its member states will analyse the lessons learnt from IFE14 and identify possible gaps.

In a preliminary assessment, the head of the evaluation team, John Walker said: “It is very clear that on its own terms, the exercise has been successful, and has also clearly shown improvements on IFE08 [the previous Integrated Field Exercise held in Kazakhstan in 2008] as well as the three build up exercises that we’ve run over the two preceding years before we ran this one.”

MacLeod added: “IFE08 was only a test drive around the block – now we’ve been on the Autobahn.”