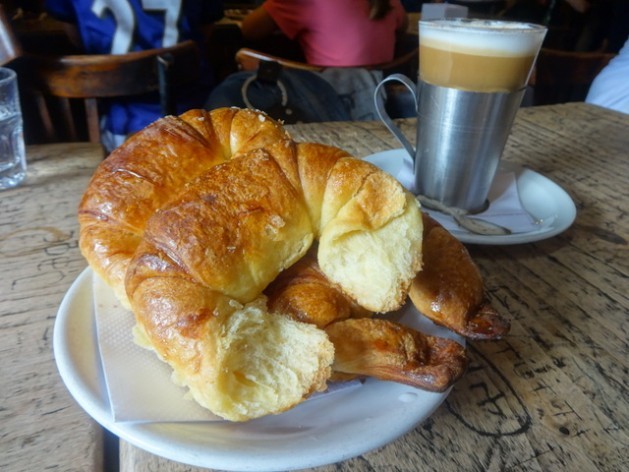 Medialunas with coffee and milk, a classic breakfast in Argentina, in a typical Buenos Aires café. From now on, these small croissants will have to be free of trans fats. Credit: Fabiana Frayssinet/IPS

BUENOS AIRES, Jan 3 2015 (IPS) - After adopting a new law banning trans fats in industrially processed foods, Argentina is starting out the new year with an improved public health outlook. The challenge now is for the food industry to incorporate the new rules, in an adaptation process that started four years ago.

“This is an important step for making progress in the prevention of cerebrovascular and cardiac diseases because it has been proven that these fats are harmful to health, as they increase bad cholesterol (LDL) and reduce the good kind (HDL),” Lorena Allemandi, director of the healthy food policies area in the Argentine branch of the InterAmerican Heart Foundation (IAHF), told IPS.

The law, in effect since Dec. 10 as part of the Food Code, limits trans fatty acids in processed foods to two percent of the total in the case of vegetable oils and margarines for direct consumption and five percent in other foods.

Based on various studies, the Health Ministry predicts that with this measure alone, Argentina could reduce the rate of coronary disease by six percent in just four or five years.

The elimination of trans fats from processed foods in Argentina joins other public policies aimed at reducing the consumption of salt and smoking, as well as increasing physical activity.

“Today we are fatter and more sedentary than our grandparents,” said Sebastián Laspiur. “There have been multidimensional changes. They ate fewer processed foods, and more homemade food; life was different. There was more time to cook, and people moved around more. There have been profound social and cultural changes,” he said, referring to modern-day risk factors.

According to the World Health Organisation (WHO), consuming just five grams a day of trans fatty acids increases the risk of cardiovascular diseases by 25 percent.

In 2008, the Trans-Fat-Free Americas initiative was launched in Rio de Janeiro, aimed at replacing trans fatty acids in food production. A number of important companies have adhered to the effort.

That could save 1,500 lives and prevent some 2,800 heart attacks and over 5,000 coronary events a year, said Sebastián Laspiur, the Health Ministry’s director of health promotion and control of non-transmissible diseases.

It would also save the national health system an estimated 100 million dollars, in cardiovascular complications and treatment, he added in an interview with IPS.

He said that even more importantly, it would boost social inclusion by benefiting in particular “the most vulnerable sectors, who tend to consume foods with more trans fats, because they are cheaper and sometimes they have less access to other kinds of food.”

Trans fatty acids are created during the process of hydrogenation of vegetable oils, which solidifies liquid oils to prevent them from becoming rancid and to keep them solid at room temperature. They are used mainly in industrially processed foods.

“They were thought to be better [than fats of animal origin], but over the years studies were carried out, and by the late 1990s there was no doubt that they are bad for our health,” said Laspiur.

Argentina has joined Austria, Denmark, Hungary, Iceland, Norway and Switzerland in virtually banning trans fats, and has become the first country in the developing South to do so. Chile is set to follow suit, in 2016.

In Argentina the process began in December 2010, when the food industry was given two years to reduce trans fatty acids in vegetable oils and margarines and four years to reduce it in other foods. The deadline was Dec. 3, 2014.

But mandatory food labeling for trans fats was introduced in 2006.

Laspiur believes there will be no problem reaching full compliance with the new rules, thanks to the reduction period, the food industry’s “broad cooperation,” and oversight by the authorities.

A 2013 study by the IAHF of 878 products from the main brands sold in supermarkets found that 42 were still over the limit, including granola bars, frosting, “alfajors” – traditional shortbread cookies with a dulce de leche filling – and other bakery products.

Enforcing the new rules among small and medium companies will be a challenge, she added.

“Vulnerable sectors are hit harder by risk factors, and this kind of policy is along those lines,” said Allamandi. “The challenge will be small and medium size companies because many of them are outside the big cities or are frequented by more vulnerable sectors because they have lower prices. It’s important for these companies to respect the new rules.”

Another challenge will be enforcing the new rules in small bakeries or microenterprises that make baked goods like medialunas, as croissants are known in Argentina.

Laspiur acknowledged that oversight and enforcement is more difficult among small-scale businesses. But he also said there would be “indirect” compliance with the new law.

“Small-scale businesses like bakeries make their products using margarine and frosting that they buy from larger companies, which won’t be allowed to use margarines with trans fats…that means they will not use these ingredients because their suppliers will have already eliminated them.”

The high-level official also said the baking industry association is already cooperating with other health policies, such as the reduction of salt in their products in order to help decrease the risk of hypertension.

He also said fast food chains, which use ingredients from outside suppliers of baked goods and sweets, would cooperate.

Healthy alternatives to trans fatty acids depend on each product. Vegetable oils are recommended, or else saturated animal fats.

National Scientific and Technical Research Council (CONICET) researchers are working on two strategies in the Institute of Polymer and Nanotechnology.

The first involves the use of a new kind of high oleic-high stearic sunflower, which contains high levels of saturated fatty acids, and the second involves the production of protein-stabilised emulsion gels.

“The main advantage of the alternatives that we’re investigating is that they use raw materials that are abundant in our country,” the head of the group working on the projects, Lidia Herrera, told IPS. “From a health standpoint, the high oleic-high stearic sunflower’s main saturated fatty acid is stearic acid, which is considered neutral with respect to blood-cholesterol levels.

“The production of protein-stabilised gels makes it possible to obtain solid products using liquid fats that contain fatty acids essential to health; this way we wouldn’t be eating saturated or trans fatty acids,” she said.

The next step is to carry out pilot studies, before scaling up the effort to an industrial level.

“We don’t have cost analyses, but since the raw materials are available in Argentina, it will be simpler for our industries to get these products. At any rate, the processes involved do not require advanced technology, which means it should be comparable to importing palm oil,” Herrera added.

Many companies use interesterified fats which have been chemically or enzymatically altered by combining stearic acid with vegetable oils – in this case, imported palm oil – containing unsaturated fat. “Because we are a country that produces raw materials, it’s an advantage to be able to use our own ingredients,” Herrera added.

So people in Argentina can rest assured that they’ll keep eating their beloved medialunas. “If they’re free of trans fats, they won’t disappear,” Allemandi said.