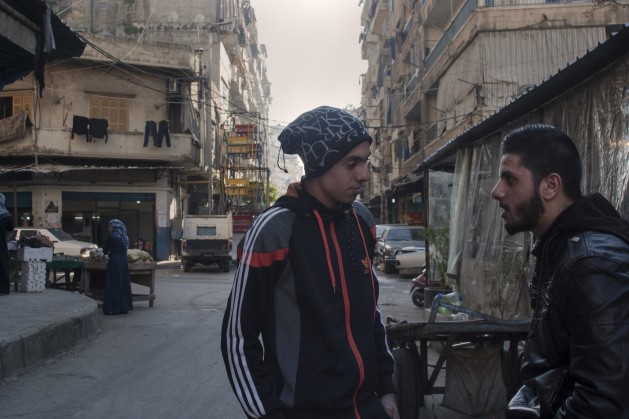 Ahmad (right), a 19-year-old student of engineering and one of Bab Al-Tabbaneh’s fortunate young people, chatting with a friend. He has been able to go to university, thanks to a grant from the Ruwwad Al Tanmeya NGO. Credit: Oriol Andrés Gallart/IPS

TRIPOLI, Lebanon, Jan 10 2015 (IPS) - “People get used to war. During the last battle, children were still coming to play. Can you imagine, a seven-year-old boy running through the bullets just to play video games,” says Mohammad Darwish, a calm man with a curled beard framing his face.

Sitting behind the counter of his cybercafé, located in one of the main streets of the Bab Al-Tabbaneh neighbourhood in this northern Lebanese city, Darwish says that his young customers have resigned themselves to the persistence of armed conflicts.

“People get used to war. During the last battle, children were still coming to play. Can you imagine, a seven-year-old boy running through the bullets just to play video games” – Mohammad Darwish, owner of a cybercafé in the Bab Al-Tabbaneh neighbourhood of Tripoli

Despite their age, they are pretty sure that clashes – which have become routine here over the past six years – will erupt again sooner or later. Even when calm reigns, the shelled and bullet-riddled buildings in Tabbaneh stand as a reminder of previous clashes.

The last eruption of violence was in late October 2014. Clashes between the army and local Sunni gunmen paralysed Tripoli for three days and destroyed part of the historic old city, leaving at least eight civilians, 11 soldiers and 22 militants dead. The army now controls Tabbaneh, with soldiers and tanks deployed on every street corner.

Curiously, flags and posters of the Islamic State (IS) can be seen displayed in houses and shops.

“I support IS [Islamic State] and the [Al-Qaeda-affiliated] Jabhat Al-Nusra (JN)”, says 19-year-old unemployed Hassan with a smile, explaining that he thinks IS will give him rights “to have a job, to live peacefully according to Islamic precepts, to move freely.”

Tabbaneh is probably the hardest neighbourhood to grow up in the whole of Tripoli. Despite being the second largest city in Lebanon, barely 80 kilometres north of Beirut, policy neglect by various central governments has left this Sunni-majority city suffering from alarming poverty, unemployment and social exclusion, and Tabbaneh is one of its poorest and most marginalised areas.

Seventy-six percent of Tabbaneh inhabitants live below the poverty line, according to a study on ‘Urban Poverty in Tripoli’, published in 2012 by the U.N. Economic and Social Commission for Western Asia (ESCWA).

These circumstances, aggravated by the political exploitation of sectarianism within a very conservative society, have fuelled the frequent rounds of violence, mainly between Tabbaneh and the neighbourhood of Jabal Mohsen. 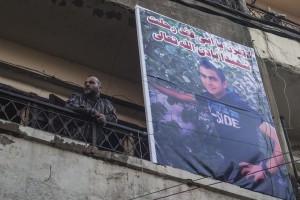 A giant poster on a balcony in Bab Al-Tabbaneh in memory of a young boy killed during clashes in the neighbourhood. Credit: Oriol Andrés Gallart/IPS

Both neighbourhoods are separated just by one street, but while Bab Al-Tabbaneh inhabitants are mostly Sunni (like the main Syrian rebel groups), most of Jabal Mohsen’s inhabitants are Alawites (the same sect as Syrian President Bashar al-Assad).

This sectarianism has determined a rivalry that dates back to the Syrian occupation of Lebanon which began in 1976 and ended in 2005, but which has turned violent again since 2008, and especially since the beginning of Syrian civil war in 2011. During the last three years, more than 20 rounds of fights have broken out in Tripoli, most of them between Tabbaneh and Mohsen militias.

“We fight to defend our people, to achieve peace,” says 19-year-old Khaled, who usually works in a bakery but also belongs to a local militia. But Ahmad, who is of the same age, is sceptical: “People fight because they don’t have money or work.”

Ahmad is studying engineering, thanks to a grant provided by Ruwwad Al Tanmeya, a regional NGO that works in the area through youth activism, civic engagement and education. Because his father served in the army, the state paid the major part of his school fees when he was younger and he was able to study in private schools outside Tabbaneh.

Hoda Al-Rifai, a Ruwwad youth officer, agrees with Ahmad: “Many families don’t have incomes. Whenever the conflict starts, the fighters get paid. And these fighters also give money to children to fulfil specific tasks. They can have three dollars a day and this is better than going to school. Their parents also think this way.”

Stereotypes also contribute to make things hard for Tabbaneh’s youth – including finding a job outside the neighbourhood – and shape their personality, explains Hoda. “When we started, the youth had no self-confidence. The media do not produce an image of these neighbourhoods as areas where you can find brilliant young men, willing to study. They just underline the clashes and all kinds of negatives things.”

“There are no members of JN or IS here,” Darwish tells IPS, adding that many in Tabbaneh see the IS flags as a way of showing dissatisfaction over the government’s alleged abandonment of the Sunni community and specifically of Tabbaneh.

“This is not a religious conflict but political. When politicians want to send a message to each other, they pay for clashes here,” adds Darwish’s 49-year-old aunt, veiled and dressed completely in black. “In this city, you can give 20 dollars to a boy so he starts a war,” explains Darwish.

Nevertheless, various studies have found that only a small percentage of the estimated up to 80,000 Tabbaneh inhabitants take part in combats, and Sarah Al-Charif, Lebanon director of Ruwwad, stresses the immediate improvements observed in Tabbaneh and Mohsen youths who participate in the NGO’s projects.

“They become aware of their shared interests, values and pain,” she says. “They became more open-minded, especially the girls.”

For Sarah, in addition to public investment and job opportunities, any solution must include awareness and education, to which Hoda adds: “First of all, citizens need to understand why the clashes take place.”