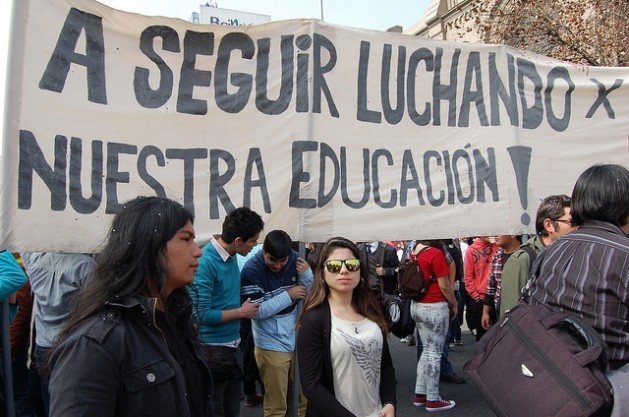 Young Chileans in one of the numerous mass protests demanding free quality education in Santiago, the capital of Chile. Credit: Marianela Jarroud/IPS

SANTIAGO, Jan 27 2015 (IPS) - Young people in Latin America now enjoy greater access to education. But in many cases their future is dim due to the lack of opportunities and the siren call of crime in a region where 167 million people are poor, and 71 million live in extreme poverty.

“We are concerned, even alarmed, at the situation facing Latin America’s youth,” Alicia Bárcena, executive secretary of the Economic Commission for Latin America and the Caribbean (ECLAC), told IPS.

“We believe young people should be the central focus of the next regional meetings, but with a different vision this time, not just focusing on drugs and violence,” she added.

According to ECLAC figures, one out of four of the 600 million inhabitants of Latin America and the Caribbean is between the ages of 15 and 29.

Despite that, spending on the young is relatively low, especially if you compare the region’s public and private investment on post-secondary education with what is spent in emerging countries of Southeast Asia, or in Europe.

“Young people aren’t necessarily the most violent – we have to fight that stigma. Youth should not be identified with violence, with detachment from the institutions. Young people want to work, they want to study, they want opportunities, new utopias, and they have new ideas.” -- Alicia Bárcena

The report, Social Panorama of Latin America 2014, presented Monday Jan. 26 in the Chilean capital, revealed significant advances in educational coverage among Latin America’s young people, but also found that they continue to suffer from higher unemployment rates and lower levels of social protection than adults.

They are also the main victims of homicides in the region, where seven of the 14 most violent countries in the world are located.

The ECLAC report shows that the progress in reducing poverty has slowed down. Poverty continues to affect 28 percent of the population in the region, while extreme poverty grew from 11.3 to 12 percent, based on the 15 countries that provided up-to-date statistics.

However, inequality has been reduced in nearly every country.

There are some 160 million young people in this region of 600 million. And although the population has begun to age, the young will remain a significant proportion of the population over the next few decades.

The report says that “Despite these major attainments in terms of education coverage and lower inequality, there are still large structural divides in capacity-building opportunities between the region’s young people.”

Bárcena said it’s not just about achieving greater social spending on education, housing or health, but also about things that are less tangible but no less important, such as improving participation by young people in the design of public policies.

“Transparency and information have to go farther than what is happening today,” she said.

Although they have greater access to education, inequality is still a problem for young people in the region.

For example, people between the ages of 15 and 29 in the three lowest income quintiles have unemployment rates between 10 and 20 percent, compared to rates of five to seven percent among young people in the two highest income quintiles.

And only 27.5 percent of young wage earners between the ages of 15 and 19 are enrolled in the social security system, compared to 67.7 percent of adults aged 30 to 64. 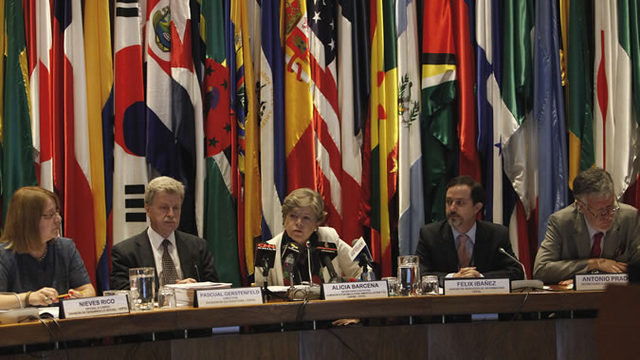 ECLAC Executive Secretary Alicia Bárcena (centre) with other ECLAC officials at the presentation of the Social Panorama of Latin America 2014 on Jan. 26 in Santiago, Chile. Credit: Carlos Vera/ECLAC

“The idea is to advance in social policies that take into account the complete cycle of life and the different priorities that arise throughout a person’s life,” Daniela Trucco, social affairs officer with ECLAC’s Social Development Division, told IPS.

She said the assessment and analysis of public policies in the region should take into account the differences between sub-regions, because Latin America is very diverse.

For example, “the Southern Cone countries are much more advanced, with a much more educated young population that has unemployment problems similar to adults,” she said.

By contrast, “in the countries of Central America young people aren’t even finishing secondary school. A large proportion of adolescents and young people are outside the educational system, and that is where we have the worst problems of violence and gangs.”

Trucco said there are key areas to be addressed among the young, such as education and employment. But although these are the most important, they are not the only ones, she added.

“There is a proportion of young people who don’t fall into these areas, but it’s not because they aren’t doing anything; they’re often employed without pay, for example, in domestic or care work in the home, a very important question for young and adult women,” she said.

The Social Panorama reports that 22 percent of people aged 15 to 29 in Latin America were neither studying nor in paid employment in 2012. Of that proportion, a majority were women engaged in unpaid care and domestic work.

Another essential area to be addressed, besides health, is participation, with the aim of involving young people themselves in the formulation of better public policies targeting that segment of the population.

“We have to think about the issue of participation in a modern, up-to-date manner,” Trucco said.

“There is a great deal of interest in political participation, but not the traditional politics linked to political parties. The question of social networks, and digital inclusion, also has to be considered,” she said.

She stressed the work carried out by ECLAC to combat two kinds of stigmas faced by young people: those who neither work nor study, and the question of youth violence.

And although the main victims of homicide are between the ages of 15 and 44, the stigma of youth violence distorts public policy options, the report says.

“We see that adolescents do participate significantly [in the violence], but young adults do too,” said Trucco. “They are young people not incorporated in other forms of social inclusion, or maybe they are, but with different expectations, and caught up in contexts of violence or inclusion in other groups.”

The expert called for “a change in approach to the problem of violence to figure out how society can overcome it and what alternatives can be offered in terms of development and opportunities.”

The proportion of victims who are young people is higher in the countries with the highest crime rates, such as the seven that are on the list of the world’s 14 most violent countries: Honduras, Venezuela, Belize, El Salvador, Guatemala, Jamaica and Colombia, in that order.

Mexico is in the process of joining that list of violent countries, Bárcena said in her interview with IPS.

The head of ECLAC said greater comprehension is needed with respect to violence among the young.

“Young people aren’t necessarily the most violent – we have to fight that stigma. Youth should not be identified with violence, with detachment from the institutions. Young people want to work, they want to study, they want opportunities, new utopias, and they have new ideas,” she said.