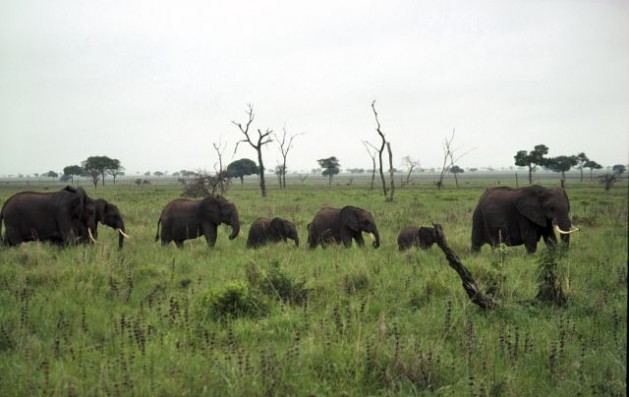 Widely used in criminal cases, forensic DNA examination (Deoxyribonucleic acid) can help identify whether the elephant tusk is from Asia or Africa.

“The ability to use DNA and other forensic expertise provides great support to law enforcement." -- Adisorn Noochdumrong

Asked whether this is a first, Dr Richard Thomas, global communications coordinator at the UK-based TRAFFIC, told IPS: “It’s the first time I’m aware of when it’s been used to test ivory items for sale to prove their (illegal) provenance.”

However, he added, it’s worth noting that at the March 2013 meeting of CITES (the 1975 Convention on International Trade in Endangered Species), State Parties to the Convention were instructed that forensic information should routinely be gathered from all large-scale seizures of ivory (500kg).

Hence this is also an important demonstration of one technique that can be employed in the fight against the illegal trade in endangered species, he said.

The current project is a collaborative effort between Thailand’s Department of National Parks, Wildlife and Plant Conservation (DNP) and TRAFFIC, to battle the widespread illegal trade of ivory in Thailand.

Asked whether African countries have similar projects in collaboration with TRAFFIC, Dr. Thomas told IPS, “Not currently, although the scope of DNA and stable isotope analysis of ivory are being examined by others as means to determine the geographic origin of ivory within Africa.”

He also pointed out that any wildlife product, by definition, is associated with life and therefore open for DNA examination.

“So, in theory it could be a very widely employed technique in addressing wildlife trafficking.”

According to the World Wide Fund for Nature (WWF), the Sri Lankan and Sumatran elephants are on a list of endangered species, along with the black rhino, mountain gorilla, Bengal tiger, the blue whale and the green turtle, among others.

WWF says the global illicit wildlife trade is estimated at over 10 billion dollars annually and is controlled by criminal networks.

Specifically on the ivory trade, Dr Thomas told IPS, “We’re very wary about speculating over black market prices – in part, because they’re black market and therefore unverifiable, but more because of anecdotal evidence that high prices quoted in the media can lead to interest from the criminal fraternity in getting involved in trafficking.”

The aim of the exercise was to determine whether the ivory products were made from African elephant or Asian elephant tusks.

The African elephant Loxodonta africana is found in 37 countries in sub-Saharan Africa, and the Asian elephant Elephas maximas is found in Thailand and 12 other Asian countries.

The study also said forensic results show that African elephant ivory accounted for a majority of the items tested.

“Whilst the relatively small number of samples cannot be considered as representative of the entire ivory market in Thailand, it indicates that African elephant ivory is prominently represented in the retail outlets in Bangkok,” it noted.

The plan was developed to control ivory trade in Thailand and strengthen measures to prevent illegal international trade and includes a strong focus on law enforcement and regulation, including the execution of a robust ivory registration system, according to the report.

“We are deeply concerned by these findings which come just at the moment a nationwide ivory product registration exercise is being conducted pursuant to recently enacted legislation to strengthen ivory trade controls in Thailand,” he added.

The report said the Thai government last month passed new legislation to regulate and control the possession and trade of ivory that can be shown to have come from domesticated Asian Elephants in Thailand.

With the passing of the Elephant Ivory Act B.E. 2558 (2015), anyone in possession of ivory – whether as personal effects or for commercial purposes – must register all items in their possession with the DNP from Jan. 22 until Apr. 21, 2015.

Penalties for failing to do so could result in up to three years imprisonment and/or a maximum fine of Thai Baht 6 million (nearly 200,000 dollars).

“We remind anyone registering possession of raw ivory or ivory products under Thailand’s new laws that African Elephant ivory is strictly prohibited and ineligible for sale in Thailand,” said Noochdumrong.