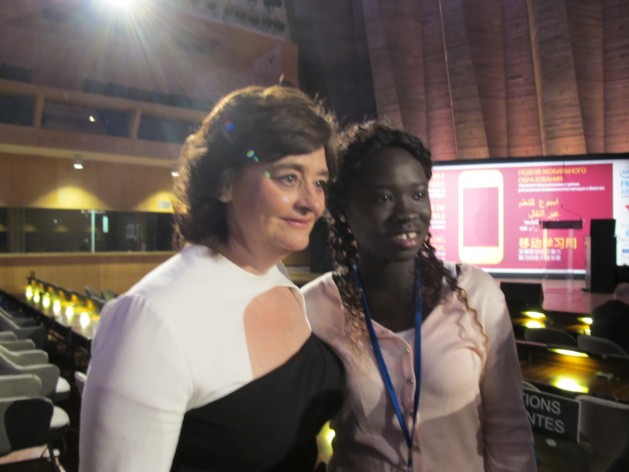 For Cherie Blair (left), founder of the Cherie Blair Foundation for Women and wife of former British Prime Minister Tony Blair, “empowering women and girls to access education isn’t an option, isn’t a nice thing to do, it’s an imperative”. Credit: A.D. McKenzie/IPS

“Mobile technology can offer learning where there are no books, no classrooms, even no teachers. This is especially important for women and girls who drop out of school and need second chances,” said Phumzile Mlambo-Ngcuka, Executive Director of UN Women.

The agency, which focuses on gender equality and the empowerment of women, joined forces with its “sister” organisation, the U.N. Educational, Scientific and Cultural Organisation (UNESCO) to host the Feb. 23-27 conference this year.

“Mobile technology can offer learning where there are no books, no classrooms, even no teachers. This is especially important for women and girls who drop out of school and need second chances” – Phumzile Mlambo-Ngcuka, Executive Director of UN Women

The aim, UNESCO said, was to give participants a venue “to learn about and discuss technology programmes, initiatives and content that are alleviating gender deficits in education.”

Participants from more than 70 countries shared so-called best practices and presented a range of initiatives to address the issue, including reducing the costs of access to mobile services in some developing countries, and providing training and free laptops to women teachers in countries such as Israel.

In an interview on the side-lines of the conference, she told IPS that “anything that encourages the education of girls is important” and that it was “particularly significant” that UNESCO and UN Women had joined forces to work together in this area to achieve results.

“We need to encourage women to use technology and we also need to involve men to provide support,” Blair said. She cited research showing that a woman in a low- or middle-income country is 21 percent less likely than a man to own a mobile phone. In Africa, the figure is 23 percent less likely, and in the Middle East and South Asia 24 percent and 37 percent respectively.

“The reasons women cite for not owning a mobile phone include the costs of handsets and data plans, lack of need and fear of not being able to master the technology,” Blair said.

Yet, according to the International Telecommunications Union (ITU), mobile phones are the “most pervasive and rapidly adopted technology in history”, with six billion of the world’s seven billion people now having access.

If there existed gender parity in this access, women could benefit from the technology in a number of ways, including getting information about healthcare and other services, experts said.

They could also potentially follow massive open online courses (MOOCS) such as those offered by an increasing number of universities and other institutions, despite on-going controversy about their benefits. Currently, the majority of students enrolled in MOOCs are men, and often from wealthy backgrounds, surveys suggest.

Whether women live in low-income or rich countries, learning how to use technology could have future benefits especially regarding employment, said Mark West, a UNESCO project officer.

“Ninety percent of jobs in the future are going to require ICT skills,” he told IPS in an interview. “So any idea that it’s not socially or culturally acceptable for women to use technology is extremely dangerous.”

He said the fact that 25 percent fewer women than men currently access the Internet “was alarming” and that changes needed to occur early in education so that girls were not left out of future jobs.

“We don’t often realise how gendered our perceptions of technology are,” he added. “Women are taught from a young age to not like technology, taught that maths and science are not for them, and this is a big problem.”

At university level, only about 20 percent of female students are pursuing careers in computer science, and in the technology sector, only six percent of CEOs are women, according to the ITU.

“We should do more to get women in STEM fields,” said Doreen Bogdan, ITU’s Chief of Strategic Planning and Membership Department, referring to the academic disciplines of science, technology, engineering and mathematics.

Some participants highlighted current programmes to keep girls interested in science, such as camps run by the California-based semiconductor company Qualcomm, which brings sixth-grade female students together to learn coding and tech skills, and does follow-up work with them as they continue their education.

“All of the tech companies are fighting for the same talent pool and there are not enough females in that talent pool because not enough girls are studying it,” said Angela Baker, a senior manager at Qualcomm.

“There’s a ton of research that shows that when you have more women in the industry, companies tend to do better … so we have a vested interest in building that pipeline of girls and women,” she told IPS.

Apart from the STEM fields, girls have made great strides in education over the past 30 years, but there is “still a long way to go,” said experts, who cited U.N. figures showing that globally there are seven girls to every 10 boys in school.

Both UNESCO Director General Irina Bokova and Cherie Blair described education as a “human rights imperative” as well as a development and security imperative.

They stressed that the goal of achieving gender equality in education will continue for the post-2015 development agenda, and that technology has an important role to play.

“Empowering women and girls to access education isn’t an option, isn’t a nice thing to do, it’s an imperative,” Blair said.