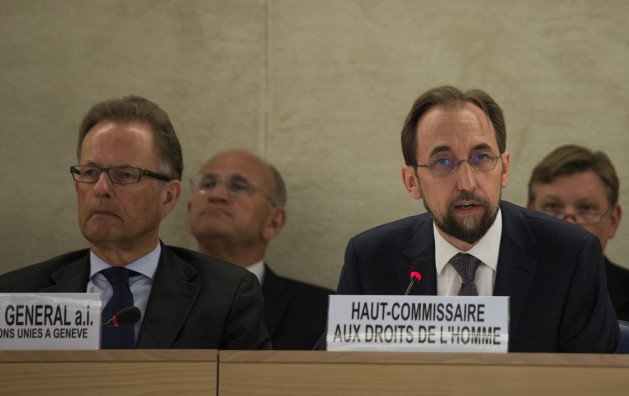 UNITED NATIONS, Feb 17 2015 (IPS) - The 47-member Human Rights Council (HRC), responding to a request by the newly-elected government in Colombo, has deferred the release of a key U.N. report on human rights violations and war crimes charges against the Sri Lankan armed forces and Tamil separatists who fought a devastating decades-long battle which ended in 2009.

The request to the Geneva-based HRC came via the U.N. High Commissioner for Human Rights Zeid Ra’ad Al Hussein, who sought the postponement of the long-awaited report, originally due in March, until September this year.

“This has been a difficult decision,” Zeid said Monday.

"A delay is only justifiable if more time will lead to a stronger report and to a concrete commitment by the new Sri Lankan authorities to actively pursue accountability."

“There are good arguments for sticking to the original timetable, and there are also strong arguments for deferring the report’s consideration a bit longer, given the changing context in Sri Lanka, and the possibility that important new information may emerge which will strengthen the report.”

But he pointed out that the deferral of the report was “for one time only,” and guaranteed it would be published by September.

Richard Bennett, Amnesty International’s Asia-Pacific Director told IPS the decision to delay, until September, the release of a key report into widespread human rights violations during the conflict in Sri Lanka must not allow the perpetrators of horrific crimes during the country’s armed conflict to escape punishment.

Survivors of torture, including sexual abuse, people whose family members were killed or forcibly disappeared have waited a long time for this report.

“A delay is only justifiable if more time will lead to a stronger report and to a concrete commitment by the new Sri Lankan authorities to actively pursue accountability. This includes by cooperating with the U.N. to investigate conflict-era abuses and bring perpetrators to justice,” he added.

Bennett warned the Human Rights Council to be vigilant and “ensure that all those coming forward to give testimony are protected from any potential threats from those who do not want justice to prevail.”

The government of President Mahinda Rajapaksa, which was unseated after national elections last month, refused to cooperate with the three member U.N.Panel of Inquiry comprising Martti Ahtisaari, former President of Finland and Nobel Peace Prize Laureate, Silvia Cartwright, former Governor-General and High Court judge of New Zealand, and judge of the Extraordinary Chambers of the Courts in Cambodia and Asma Jahangir, former President of Pakistan’s Supreme Court Bar Association and of the Human Rights Commission of Pakistan.

But the new government of President Maithripala Sirisena sought the postponement of the report’s release and has offered to set up a “domestic mechanism” not only to probe war crimes charges but also stall any possibility of an international war crimes tribunal.

Rupert Colville, a spokesman for the High Commissioner told IPS Zeid had also spoken by telephone with Sri Lanka’s new Foreign Minister Mangala Samaraweera, who is expected to attend the next regular session of the Human Rights Council which begins March 2.

“It’s very clear this approach will take away any chance the new government can say they haven’t had enough time to start a serious justice effort. By September we will all be able to judge the sufficiency of their efforts,” he added.

In a statement released Monday, Zeid said he has received clear commitments from the new Government of Sri Lanka indicating it is prepared to cooperate “on a whole range of important human rights issues – which the previous Government had absolutely refused to do – and I need to engage with them to ensure those commitments translate into reality.”

He also pointed out that the “three distinguished experts who were appointed by his predecessor Navi Pillay to advise the investigation, had informed him that, in their unanimous view, a one-off temporary deferral would be the best option to allow space for the new Government to show its willingness to cooperate on human rights issues.”

“Taking all this into account, I have therefore decided, on balance, to request more time to allow for a stronger and more comprehensive report,” Zeid said.

“I am acutely aware that many victims of human rights violations in Sri Lanka, including those who have bravely come forward to provide information to the inquiry team, might see this is as the first step towards shelving, or diluting, a report they have long feared they would never see.”

“I fully understand those fears and deep anxieties, given the history of failed or obstructed domestic human rights inquiries in Sri Lanka, and the importance of this international investigation being carried out by my team at the UN Human Rights Office.”

He said there should be no misunderstanding because “I give my personal, absolute and unshakable commitment the report will be published by September.”

Like his predecessors, he said, he believes that one of the most important duties of the High Commissioner for Human Rights is to act as a strong voice on behalf of victims.

“I want this report to have the maximum possible impact in ensuring a genuine and credible process of accountability and reconciliation in which the rights of victims to truth, justice and reparations are finally respected,” he declared.

The U.N. inquiry was the result of a resolution adopted by the HRC back in March last year which requested the Office of the High Commissioner for Human Rights “to undertake a comprehensive investigation into alleged serious violations and abuses of human rights and related crimes by both parties in Sri Lanka”

The HRC requested Zeid’s office “to establish the facts and circumstances of such alleged violations, and of the crimes perpetrated, with a view to avoiding impunity and ensuring accountability,” with assistance from relevant experts.

The resolution requested the Office to present a comprehensive report at its 28th session in March 2015.

The author can be contacted at thalifdeen@aol.com