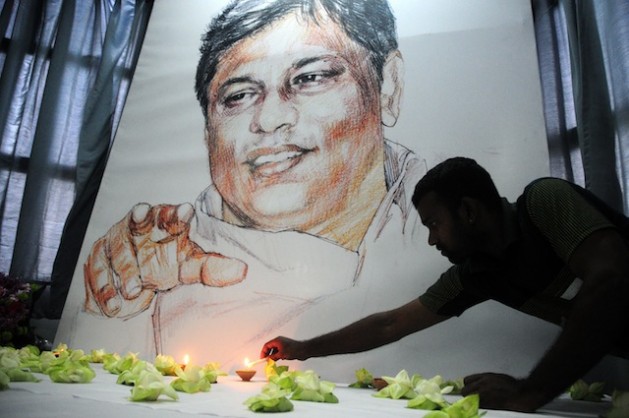 Lasantha Wickrematunge, an editor and unashamed critic of Sri Lanka’s then-President Mahinda Rajapaksa and his government, was killed just five minutes away from his office in Ratmalana, a suburb of the capital Colombo. Motorcycle-riding assailants, none of whom have been identified, waylaid him and assassinated him in broad daylight.

The murder sent shockwaves through the media community, already besieged by an administration that had a zero-tolerance policy towards criticism while it pushed for a military victory to end a long-running separatist war with Tamil rebels in the north of the island.

In 2014, Sri Lanka was ranked 85th on the Corruption Perceptions Index (CPI), with just 38 out of 100 points, indicating a strong need for anti-corruption measures -- Transparency International
The Wickrematunge murder was a catalyst that drove many others to take shelter outside of Sri Lanka, as state repression increased. According to the Committee to Protect Journalists (CPJ) at least 13 journalists have been killed in Sri Lanka, while dozens have fled in fear of deadly reprisals, since Mahinda Rajapaksa assumed office in 2005.

His assassination was also seen as an attack on one of the few news outlets committed to exposing corruption, revealing nepotism and pushing for good governance at a time when the so-called “right” to information was a pipedream.

Exactly six years to the day of the murder, Rajapaksa lost the presidency. Some of Wickrematunge’s close family members and associates have called the defeat divine retribution. And it has been hard to ignore the coincidence.

Since the election, the Sri Lankan media as a whole have been breathing lightly. The new government has eased travel restrictions and granted access to blocked or banned websites. New ministers have been quick to assure the public that national intelligence personnel have been ordered to stop listening in on private phone calls.

“The State Intelligence Service has been asked to strictly limit itself to national security operations, nothing else,” Cabinet Spokesperson and Health Minister Rajitha Senaratne told foreign correspondents on Jan. 28 in the capital.

The government is also pushing ahead with a long-delayed Right to Information (RTI) Act, which is likely to be presented to parliament by Feb. 20, little over a month after the new government took office.

A committee has been set up to draft the bill. It has been meeting with media rights groups and others to prepare a draft to be presented to the cabinet by Feb. 16.

This is not the first time such a bill has been moved in Sri Lanka’s parliament. In September 2010, Karu Jayasuriya, the deputy leader of the opposition United National Party (UNP), presented an RTI bill to parliament but was forced to withdraw it following strong resistance from the regime.

That was the last anyone heard of the transparency initiative for five years.

Under the new governing coalition helmed by President Maithripala Sirisena, however, the issues of transparency and good governance are finally drifting closer to the top of the agenda.

According to Gayantha Karunathilaka, the new minister of media, “There is a lot of house cleaning we have to do and we don’t want to waste any time.”

The bill will mandate by law the right to seek information from public offices and officials, and also protect those who seek such information. The new government has also appealed to those who fled the country to return though none have yet done so.

Economic analysts here feel that an RTI bill could act as a deterrent against rampant corruption, one of the main grievances with the Rajapaksa regime.

Corruption and waste by the former president and his detail was so extreme that the current interim budget, prepared ahead of General Elections in April, has indicated a cut of some 80 billion rupees (over 600,000 dollars) in the funds hitherto allocated to the presidential secretariat.

Experts say it is only the tip of the iceberg of the degree to which state funds were gobbled up by those in the president’s immediate family or closely allied with the regime.

“In countries like India, the RTI Act appears to have reduced corruption as reflected in the improvement in India’s rating in the Corruption Perceptions Index (CPI) produced by Transparency International [from 94th place in 2012 to 85th last year],” economist Muttukrishna Sarvananthan told IPS. “Many other developing countries have also experienced improvement in the CPI after Right To Information [Acts].”

He feels that such a step would pave the way for more scrutiny of public spending from the media when there is legal guarantee to seek such information from governments.

In 2014, Sri Lanka was ranked 85th on the CPI, with just 38 out of 100 points, indicating a strong need for anti-corruption measures, according to the watchdog group.

In one of the most startling examples of corrupt public spending, the last government reportedly spent 846 million rupees, or roughly six million dollars, in a failed bid to host the Commonwealth Games in Sri Lanka.

Last week local newspapers reported that the Ministry of Highways, whose portfolio came under the former president, had spent 50 billion rupees in excess of its budget allocations in 2014, almost all of it on election campaigning for Rajapaksa who eventually lost the race.

“It is just one block in a larger wall that we need to build to reinforce civic rights here. Along with the RTI Act, the government should also look at establishing an independent commission for the judiciary and police […],” he stated.

Jayasekera said that the last five years have seen media rights erode like never before. The FMM official said that while scores of journalists have fled the country others have been forced to practice self-censorship.

“It is not only through fear and intimidation – they were the more obvious modes – there was a lot of censorship by way of financial control,” he added.

Several privately-held media houses changed ownership in the last five years, including The Sunday Leader, the leading English-language daily edited by Wickrematunge that at times acted as the lone deterrent against nepotism.

Most of the new investors were suspected of supporting the Rajapaksa administration.

In one such instance, a leading weekly newspaper management told its staff soon after the election that it had lost all advertising revenue, simply because over 90 percent of its ads came from government agencies.

The newspaper also had an unwritten law of not writing anything about the casino-related investments entered into by the Rajapaksa government – estimated at over one billion dollars.

The self-imposed restriction was suspected to be due to the new ownership’s business interests in gaming.

“That is just one example, there are dozens of such in the last decade or so,” Jayasekera explained.

He said that the new government should set the tone without delay to indicate that it supports a vibrant media culture.

“The FMM was one of over 40 civil organisations that supported the Sirisena campaign on a broad reform agenda, and the government is duty-bound to keep those pledges,” he stressed.