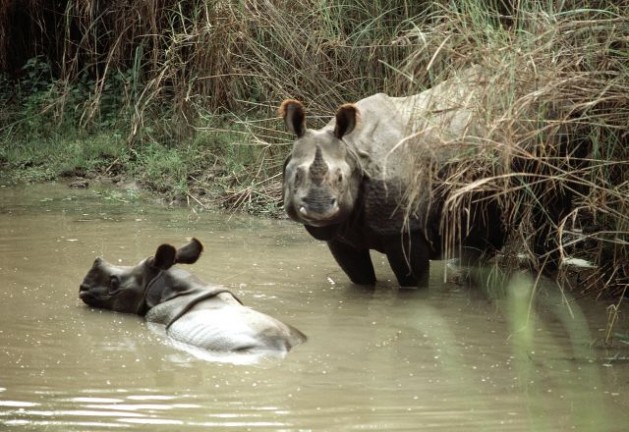 Mother and baby rhinoceros in Tigertops Wildlife Sanctuary, Nepal. The unrestricted exploitation of wildlife has led to the disappearance of many animal species at an alarming rate, destroying earth's biological diversity and upsetting the ecological balance. Credit: UN Photo/John Isaac

CAMBRIDGE, UK, Mar 23 2015 (IPS) - On Feb. 13, 2014, heads of state and ministers from 41 countries met in London to inject a new level of political momentum into efforts to combat the growing global threat posed by illegal wildlife trade to species such as elephants, rhinos and tigers.

Most worrying is the significant increase in the frequency of large-scale ivory seizures—those of over 500 kg—which are a strong indication of the involvement of organised criminal networks.

More than a year on, representatives from these governments will gather again March 25 in Kasane, Botswana, to review progress on the implementation of that Declaration and, hopefully, commit to new and tangible actions to further strengthen their implementation.

The scale of the crisis governments in Kasane are facing is daunting: Africa-wide, almost 1,300 rhinos were lost to poaching in 2014, 1,215 of them in South Africa alone.

Most worrying is the significant increase in the frequency of large-scale ivory seizures—those of over 500 kg—which are a strong indication of the involvement of organised criminal networks. The 18 seizures made in 2013 collectively constitute the greatest quantity of ivory derived from large-scale seizures since 1989, when records began.

The crisis is not confined to Africa: in Asia, TRAFFIC’s tiger seizures database clearly indicates that illicit trafficking of tiger parts remains persistent. A minimum of 1,590 tigers were seized in tiger range countries between January 2000 and April 2014, an average of two per week and increasing numbers of seizures have been made by most range States.

With over 218,000 pangolins reported to have been seized by enforcement agencies between 2000 and 2012 world-wide, we must also remember that wildlife crime is an issue that goes well beyond elephants, rhinos and tigers.

While these figures paint a bleak picture of the illegal wildlife trade landscape, it would be wrong to conclude that countries will have little to report in terms of progress at Kasane. Although the ivory seizure figures do demonstrate high levels of trade, they also demonstrate higher levels of law enforcement action, especially in Africa, and we hope these countries remain vigilant.

High-level political attention to the issue continues to be significant, with U.N. Secretary-General Ban Ki-moon earlier this month expressing concern over the environmental, economic and social consequences of wildlife crime and Premier Li Keqiang of China last May pledging financial support for African countries to combat poaching.

Some countries have made improvements to legislation, including Thailand, which probably had one of the largest unregulated ivory markets in the world but has recently taken steps to improve the legislation governing its domestic ivory market.

There is still a very long way to go for Thailand before its illegal ivory markets are shut down, but this was an important step in the right direction. China has recognised the importance of a more targeted approach to reducing demand for ivory and this January organised a workshop to discuss strategies for curbing illegal ivory trade—particularly targeted at the collection and art investment circles.

Countries in Africa are working together on a common African Strategy on combatting illegal wildlife trade that will be discussed at an African Union conference just a month after Kasane.

While these green shoots of progress are promising, there is little doubt that much more needs to be done and it is hoped that Kasane can be the turning point where the lofty declarations of London can be translated into tangible actions on the ground.

Wildlife criminals are responding to the actions of last year by changing their trade routes and methods, using new technologies and getting more organised. To keep up with these developments, new approaches need to be agreed at Kasane that make it significantly harder for criminals to operate, increasing the indirect and actual risks they face and reduce the rewards they reap.

New players will also need to be brought into the fray. For example, with traffickers typically using the same transportation means as legal importers, the transport sector is inadvertently becoming a critical link within illegal wildlife trade chains.

Much more outreach is needed to the private sector, to prevent criminals abusing other legitimate business services in the finance, insurance and retail sectors.

Meanwhile the power of local communities, who live with and adjacent to wildlife, needs to be harnessed for they are the eyes and ears, the very guardians of the wildlife within their realm.

Community-led approaches need to strengthen the role these communities can play in reducing illegal wildlife trade—while safeguarding their dependence on natural resources.

The world’s governments in London last year declared they were up to the challenge and committed to end the scourge of illegal wildlife trade. A year later, Kasane provides the venue for those governments, and others, to show that they are able and willing to turn those words into action.