Josephine Ojiambo is Deputy Secretary-General of the Commonwealth Secretariat 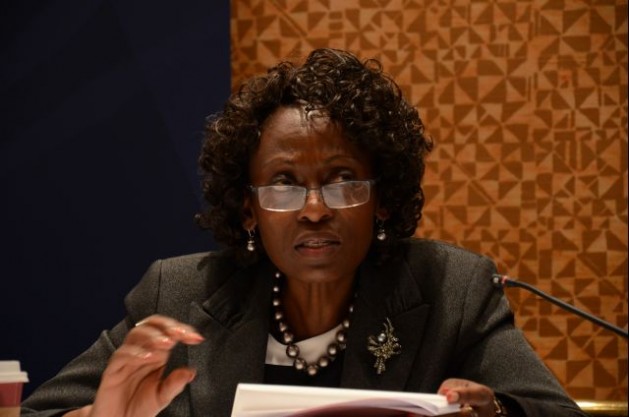 LONDON, Mar 21 2015 (IPS) - Undoubtedly, we are at a crucial time in the advancement of gender equality.

As we move towards consensus on the Sustainable Development Goals (SDGs), we must ensure the rights of women and girls are firmly embedded in the post-2015 development framework.

Twenty years ago, leaders and global activists met in Beijing and created what was the most progressive roadmap to champion the rights of women – the Beijing Declaration and Platform for Action.

As we celebrate the anniversary of this landmark declaration, we must also caution against complacency as countries renew efforts to remove barriers that block women’s full and equal participation in all sectors of society.

An issue of serious concern remains the under-representation of women in politics. Until women are adequately represented at the highest level of policy making and decision making, we cannot hope to achieve the development aspirations of half the population.

We must accelerate efforts to reach the internationally agreed targets of 30 per cent representation of women in political decision-making roles.

The Commonwealth has made significant progress towards increasing women’s political participation. Out of 43 countries globally that have reached or exceeded the 30 per cent target, more than a third are Commonwealth countries.

We have seen the introduction of important measures to redress the lack of women in political leadership, such as quotas and national gender policies.

In India and Bangladesh, for example, constitutional amendments to reserve one-third of all local government seats for women have led to the election of over one million women.

These achievements are good but not good enough. Women continue to be marginalised, oppressed, and subjected to violence and cruelty – female genital mutilation, early and forced marriage, trafficking, slavery and sexual violence.

A culture of impunity prevails when it comes to prosecuting and preventing such violations. Under these current conditions, is it any wonder that only 22 out of 193 countries have a woman as head of state or government?

I recall my own formative political experience in Kenya: my mother became the country’s first female cabinet minister in the early seventies, and remains a formidable politician even today. I witnessed the hardships she endured to rise through the ranks, and the adversity she faced when in office, as well as her successes and achievement.

I too had a similar experience when I joined the oldest political party in Kenya, the Kenya African National Union (KANU), as a volunteer and youth activist.

Over a period of 24 years, I rose through the ranks as a professional volunteer. This role granted me presence and agency; it ushered me forward to eventually be voted in as the first female secretary-general of the party.

I learned many lessons during my experience in grassroots electoral politics – the sharing of good practices, the solidarity of sisterhood within the women’s movement, and the true support of key male champions.

Globally, however, women’s political participation continues to be thwarted by innumerable obstacles. Discrimination against women is rife.

Financial resources available to women to run political campaigns are scant or non-existent. Conflicts between work and family can be overwhelming.

We are all familiar with the tired saying, ‘a woman’s place is in the home’; it is exactly this type of regressive narrative that sets women back. Challenging gender-based stereotypes is still an ongoing, uphill battle.

Therefore, we must find ways to create inclusive and enabling environments where women are able to realise their full political, economic and social potential.

We must turn our attention to paving the way for future generations. Creating pathways that enable more young women to enter the ranks of political leadership is fundamental.

Education is the single most important tool to achieve this. Yet, women and girls continue to be denied the same opportunities afforded to their male counterparts.

Our Commonwealth Charter recognises that: “Gender equality and women’s empowerment are essential components of human development and basic human rights. The advancement of women’s rights and the education of girls are critical preconditions for effective and sustainable development.”

To this end, we will work closely with member governments to fulfil international commitments in line with the stand-alone goal agreed at the 58th session of the U.N. Commission on the Status of Women and the Sustainable Development Goals.

Going forward, we seek to increase women’s participation in the political and corporate sectors through electoral and legislative reforms. We continue to push for the elimination of violence against women and girls in all Commonwealth countries.

Advancing women’s economic empowerment is another priority area. It is the social responsibility of governments to improve women’s enterprise and encourage business activity, thereby strengthening women’s economic power – one of the measures of overcoming poverty.

There is much work to be done. We must now deliver on promises to secure women’s equal participation in all echelons of society. We owe it to more than half of the global population to do a better job.