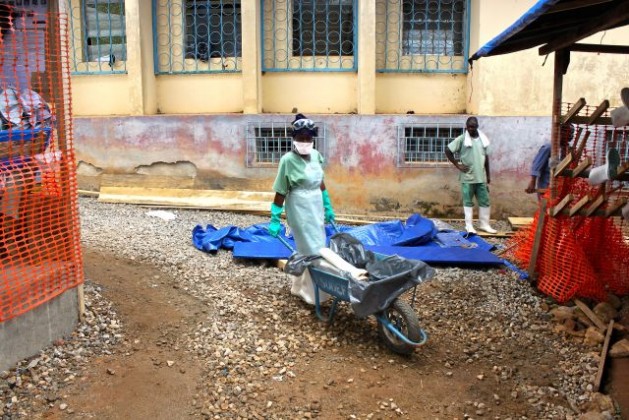 Scene from an Ebola treatment facility run by Médecins Sans Frontières (MSF) in Guéckédou, Guinea, on the day of a visit from Anthony Banbury, Special Representative of the Secretary-General and Head of the UN Mission for Ebola Emergency Response (UNMEER), on Nov. 1, 2014. Credit: UN Photo/Ari Gaitanis

Winnie Byanyima, executive director of Oxfam International, said, “Communities pulling together has been vital to cutting Ebola infection rates […] But in order to be effective these networks need to work within a strong national healthcare service that is freely available to all people.”

In light of the World Bank’s talks on Ebola, set for Apr. 17 as part of the bank’s annual spring meetings in Washington DC, the focus is on the need to create a 10-year investment plan for free universal health care to ensure that countries are able tackle future disease outbreaks.

More than 10,000 people have died during the Ebola epidemic due to public health failures, remarked Byanyima. Oxfam has trained community volunteers and 1.3 million workers to visit houses and raise awareness about symptoms, good hygiene and risky behaviours, as well as supporting clinics, schools and people in quarantine with water and sanitation.

The money is the minimum amount needed to assure health care assistance for all in Liberia, Sierra Leone, Guinea and Guinea-Bissau, according to Oxfam, and it would be invested in well-equipped facilities, sufficient trained staff, medical supplies and a systems of health information to strengthen community networks.

Byanyima said that, “The rise of stronger new community networks offer greater space for local people to be involved in decision making, but they have been excluded from recovery planning,” adding that this attitude should change, and donors should insist on engaging more with communities.

Building community networks is also vital to hold governments accountable for the money they spent, and if they spent it well, she remarked.

In Sierra Leone, around 12,000 children are orphans, and 180,000 people are jobless. In December 2014, in Liberia, 73 percent of people in three counties, Montserrado, Nimba and Grand Gedeh, reported dramatic economic impacts, in lost income and harvests, Oxfam researchers reported.

Oxfam urges the international community to invest in stronger public services, and to help local people to recover from the immediate psychological, social, and economic impacts left by the disease.