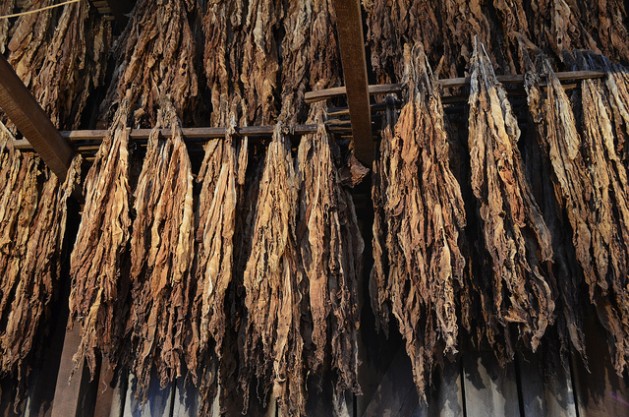 Children who work on tobacco farms in the U.S. are vulnerable to nicotine poisoning, especially when handling wet tobacco leaves. Credit: MgAdDept/CC-BY-SA

UNITED NATIONS, Apr 6 2015 (IPS) - For many young people, the summer is synonymous with free time, relaxation, or family vacations. For less fortunate kids the summer means labour, with scores of youths taking on part-time work to support their families.

In the U.S., not only is this work not optional, it is also unhealthy – especially for those unfortunate enough to seek employment on the country’s tobacco farms.

“The hardest of all the crops we’ve worked [with] is tobacco. You get tired. It takes energy out of you. You get sick, but then you have to go right back to the tobacco the next day.” -- Dario, a child labourer interviewed by Human Rights Watch (HRW)
A recent string of policies aimed at addressing child labour in this major industry signals a turning point – but activists say the uphill battle is not yet over.

Human Rights Watch (HRW) recently released a report detailing conditions of child labour in four of the country’s main tobacco-producing states – North Carolina, Kentucky, Tennessee, and Virginia – which together account for 90 percent of domestic tobacco production. In 2012, the total value of tobacco leaves produced in the U.S. touched 1.5 billion dollars.

According to the report, most of these children, sometimes as young as 12 years old, come from Hispanic immigrants families, and work on tobacco farms to help their families to pay rent and bills, and buy food and school supplies.

Margaret Wurth, co-author of the report and children’s rights researcher at HRW, told IPS that many children “chose to do this difficult job because there are no other job opportunities in the communities where they live […].”

Out of the 141 children interviewed by HRW, two-thirds suffered from acute nicotine poisoning, or Green Tobacco Sickness (GTS) while working on plantations. GTS happens when workers absorb nicotine through their skin while handling tobacco plants, especially when the leaves are wet.

Sixteen-year-old Dario, who has worked on farms in Kentucky, said in an interview with HRW, “The hardest of all the crops we’ve worked [with] is tobacco. You get tired. It takes energy out of you. You get sick, but then you have to go right back to the tobacco the next day.”

Typical symptoms include dizziness, vomiting, nausea, and headaches. Some children also reported that employers did not guarantee training courses or safety equipment. Some had to work barefoot; others wore only socks as they worked in fields thick with mud, according to HRW research.

Fabiana, 14, said to HRW, “I wore plastic bags because our clothes got wet in the morning. They put holes in the bag so our hands could go through them […]. Then the sun comes out and you feel suffocated in the bags. You want to take them off.”

A giant industry in need of reform

According to the Centers for Disease Control and Prevention, in 2012 the U.S. produced nearly 800 million pounds of tobacco. The U.S. is the fourth leading tobacco producer in the world, after China, Brazil and India but unlike its competitors, the U.S. does not regulate the age of its employees on the tobacco fields, according to Alfonso Lopez, Democratic representative of the Virginia House of Delegates.

Recently, Virginia had the chance to become the first U.S. state to enact a law on child labour in tobacco plantations, in order to set a standard for all tobacco growers to protect children. But the proposed bill was defeated.

“My bill would prohibit hiring children under 18 to work in direct contact with tobacco leaves, or dried tobacco, with the exception of children who received parental consent to work in family farms,” Lopez explained to IPS.

Pressure from advocates, and studies like the one produced last year by HRW are slowly bearing fruit, with two large associations of tobacco farmers – the Tobacco Growers Association of North Carolina (TGANC) and the Council for Burley Tobacco in Kentucky – adopting new policies that prevent the hiring of children under the age of 16, and requiring parental consent for children aged 16-17.

An Altria Group spokesperson, Jeff Caldwell, told IPS that in 2014, Altria signed the global pledge of commitment to eliminate any form of child labour in the tobacco supply chain worldwide, promoted by the Eliminating Child Labour in Tobacco Growing Foundation (ECLT).

In 2015, Altria started buy tobacco directly from growers, instead of buying it from third parties, in order to ensure that growers were not hiring children under 18, Caldwell added.

“We also have a very robust programme to train our growers and communicate to all of them the standardised U.S. tobacco good agricultural practices, to ensure that all of these growers are aware of, trained on, and in compliance with policies and laws that govern tobacco growing in order to protect children,” he added.

However, these measures only apply to farms that are part of large corporate supply chains, said Lopez.

“Most of the major buyers of U.S.-grown tobacco have adopted child labour standards more protective than U.S. law. But I think that without a stronger [federal] regulatory framework, dozens of children will inevitably be left out,” he remarked.

A Department of Labour Spokesperson told IPS that the bulletin focuses on the hazards of working in unsafe and unhealthy working conditions. The guidelines are designed to educate tobacco companies, farmers, and workers on preventing the effects of GTS, through appropriate training and working equipment.

The guidelines recommend the use of gloves, long sleeve shirts, long pants and water-resistant clothing when handling tobacco leaves to prevent exposure to nicotine, while recognising that children may suffer worse consequences than adults if these regulations aren’t met, the spokesperson added.

However, the bulletin made no explicit mention of child labour, nor did it specify ways to tackle the problem through more concrete regulation.