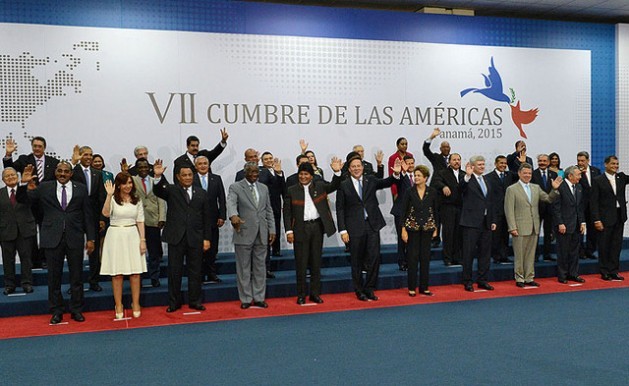 PANAMA CITY, Apr 13 2015 (IPS) - Latin America presented its own recipes for development in the new era of relations with the United States in the Seventh Summit of the Americas, where Cuba took part for the first time and the U.S. said it would close the chapter of “medd[ling] with impunity” in its neighbours to the south.

“We must understand that the Americas to the north and to the south of the Rio Grande are different. And we must converse as blocs,” Ecuadorean President Rafael Correa said Saturday Apr. 11 on the closing day of the summit, where the leaders of all 35 countries of the Western Hemisphere met for the first time.

With references to history, anti-imperialistic declarations, proposals for solutions and suggested development goals, the leaders who gathered in Panama City expressed a diversity of political positions and priorities, under the summit’s slogan: “Prosperity with Equity: The Challenge of Cooperation in the Americas”.

The two-day meeting was historic due to the presence of Cuba, suspended from the Organisation of American States (OAS) between 1962 and 2009. “It was time for me to speak here in the name of Cuba,” said President Raúl Castro in his speech during the summit’s plenary session.

Cuba’s participation was preceded by another historic development: the restoration of diplomatic ties announced Dec. 17 by Castro and U.S. President Barack Obama.

Without exception, the heads of state and government who addressed the plenary in the Atlapa Convention Centre celebrated the socialist island nation’s participation in the Americas-wide meeting, which many of them saw as representing the end of the Cold War and burying a period of ideological clashes between the left and right.

At the summit, Obama and Castro put 56 years of bitter conflict further behind them with a handshake and small talk during the opening ceremonies, points in common in their speeches, exchanges of praise and a bilateral meeting where they confirmed their earlier decision to normalise relations without renouncing their differences.

The region “no longer permits unilateral, isolationist policies,” Brazilian President Dilma Rousseff said in her address. “Today we have gathered together in a different context.”

Cuba’s full insertion and the advanced talks held since 2012 between the Colombian government and leftwing guerrillas to end the last armed conflict in the region, which has dragged on for over half a century, means Latin America can soon declare itself a region of peace, as sought by the 33 countries of the Community of Latin American and Caribbean States.

In Rousseff’s view, “the consolidation of democracy and new political paradigms in each one of our countries led to a shift, and public polices now put a priority on sustainable development with social justice.” 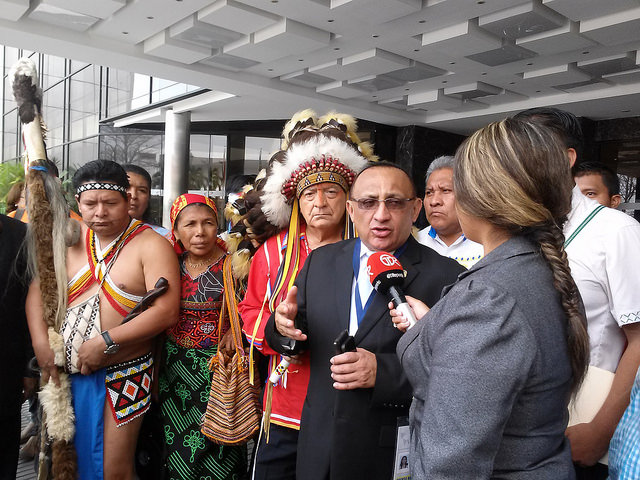 Alcibíades Vásquez, Panama’s minister of social development, while being interviewed, surrounded by indigenous leaders who on Apr. 11 delivered to him the declaration “Defending our nations” in the name of 300 native representatives who participated in one of the alternative forums held parallel to the Seventh Summit of the Americas. Credit: Ivet González/IPS

The leader of Latin America’s powerhouse, who has a history of trade unionism and activism against Brazil’s 1964-1985 dictatorship, said “Latin America today has less poverty, hunger, illiteracy and infant and maternal mortality than in previous decades,” even though it remains the most unequal region in the world.

After fielding criticism from Correa regarding human rights and respect for sovereignty, Obama said “The United States will not be imprisoned by the past — we’re looking to the future.”

He said he had fulfilled his earlier pledge “to build a new era of cooperation between our countries, as equal partners, based on mutual interest and mutual respect.”
“We are more deeply engaged across the region than we have been in decades,” he said. He added that “We still have work to do to harmonise regulations; encourage good governance and transparency that attracts investment; invest in infrastructure; address some of the challenges that we have with respect to energy.”

Castro, who was applauded at the start and end of the summit, discussed at length the history of relations between Cuba and the United States. He thanked Obama for trying to end the economic embargo in place against his country since 1962, which “affects the interests of all states” because of its extraterritorial reach.

He urged the hemisphere to strengthen cooperation in fighting climate change and improving education and healthcare, and cited the joint efforts by Latin America and North America in combating the ebola epidemic in West Africa, which has already claimed the lives of more than 10,000 people.

He said that currently 65,000 Cubans are working in 89 countries, as part of the country’s cooperation in the areas of education and health.

And he added that the hemisphere could do a great deal, because Cuba, “with very limited resources,” has helped trained 68,000 professionals and technical workers from 157 countries.

Argentine President Cristina Fernández invited more investment in the countries of Latin America to curb migration to the United States or Canada.

Meanwhile, Peru’s leader, Ollanta Humala, reiterated the need for the region to diversify production, which is based on commodities, and mentioned technology transfer.

The main point of friction at the summit was the Mar. 9 executive order signed by Obama, in which he called Venezuela a threat to U.S. national security. The prime minister of Trinidad and Tobago, Kamla Persad-Bissessar, said 33 of the 35 countries meeting in Panama City had called for the repeal of the decree.

Although there was no official confirmation, the issue was reportedly the main cause for the fact that for the third time since these summits began, in 1994, the highest-level inter-American meeting ended without a final declaration, which was to be titled “Mandates for Action”.

But the participants in the Fifth Summit of Indigenous Peoples of Abya Yala (the Americas) did agree on a final statement, “Defending our nations”, which some 300 native leaders delivered to the convention centre where the presidential summit was taking place, decked out in traditional dress complete with feathers and other ceremonial adornments.

“If all voices are not represented, prosperity with equity is impossible,” Hokabeq Solano, a leader of the Kuna people of Panama, told IPS.

“There was very little representation of our communities in the summit and the parallel forums,” another representative of the hemisphere’s 55 million indigenous people complained.

The indigenous gathering was independent of the Fifth People’s Summit, where more than 3,000 representatives of social movements participated. Since 2005, this meeting has been the alternative conference to the official summits.

In their declaration, the indigenous leaders demanded constitutional reforms that include native peoples, protection of sacred sites, and a roadmap for the unification of indigenous peoples. They also rejected development projects that entail forced displacement of communities.

Some 800 participants in the Forum of Civil Society and Social Actors, another parallel meeting, also delivered to the president a document with proposals on health, education, security, energy, environment, citizen participation and democratic governance.