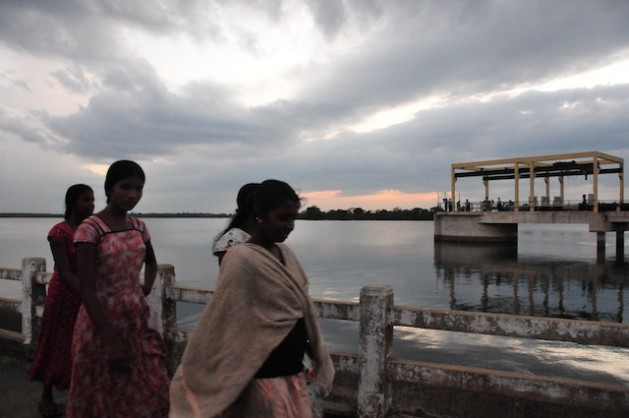 Oxfam research found that in Sri Lanka, where over 33,000 people died or went missing during the 2004 Asian tsunami, two-thirds were women. Credit: Amantha Perera/IPS

BALI, Indonesia, Apr 2 2015 (IPS) - The statistics tell the story: in some parts of the world, four times as many women as men die during floods; in some instances women are 14 times more likely to die during natural disasters than men.

A study by Oxfam in 2006 found that four times as many women as men perished in the deadly 2004 Asian tsunami. In Sri Lanka, where over 33,000 died or went missing, two thirds were women, Oxfam research found.

“Women have to practically scream for their voices to be heard right now." -- Aleta Baun Indonesian activist and winner of the 2013 Goldman Environmental Prize
According to a World Bank assessment, two-thirds of the close to 150,000 people killed in Myanmar in 2008 due to Cyclone Nargis were women.

The aftermath of environmental disasters, too, is particularly hard on women as they struggle to deal with sanitation, privacy and childcare concerns. Women displaced by climate-related events are also more vulnerable to violence and abuse – a fact that was documented by Plan International during the 2010 drought in Ethiopia when women and girls walking long hours in search of water were subject to sexual attacks.

In post-disaster situations, the burden of feeding the family often falls to women, and many are forced to become breadwinners when men migrate out of disaster zones in search of work.

The pattern repeats itself in environmental crises around the world, every day.

A report published last month by the Global Greengrants Fund (GGF), the International Network of Women’s Funds (INWF) and the Alliance of Funds found that “women throughout the world are particularly vulnerable to the threats posed by a changing climate” – yet they are the least likely to receive proper funding to recover from, adapt to or protect against the dangers of disasters.

Produced after the August 2014 Summit on Women and Climate held in the Indonesian island province of Bali, which brought together over 100 grassroots activists and experts, the report revealed that “only 0.01 percent of all worldwide grant dollars support projects that address both climate change and women’s rights.”

Experts say this represents a critical funding gap, at a time when the international community is stepping up its efforts to deal with a global climate threat that is becoming more urgent every year; research by the non-profit Germanwatch found that between 1994 and 2013, “More than 530,000 people died as a direct result of approximately 15,000 extreme weather events, and losses during [the same time period] amounted to nearly 2.2 trillion dollars.”

The problem is not a lack of funds; experts say the real issue is ignorance or unwillingness on the part of donors or supporting organisations to funnel limited financial resources into the most effective projects and initiatives.

“The new report is a guide to funders on how to identify and prioritise projects so that women can get out of this dangerous situation,” GGF Executive Director and CEO Terry Odendahl told IPS.

In a bid to connect funders directly with women on the ground working within their own communities, the Bali summit last year brought together activists with organisations that distribute some 3,000 grants annually in 125 countries to the tune of 45 million dollars.

The goal of the summit – carried forward in the report – was to enable the experiences and ideas of grassroots women’s groups to shape donor agendas.

Among the many priorities on the table is the need to increase women’s participation in policymaking at local, national and international levels; address the most urgent climate-related threats on rural women’s lives and livelihoods; and recognise the inherent ability of women – particularly indigenous women and those engaged in agricultural labour – to curb greenhouse gas emissions and protect environmentally sensitive areas.

Aleta Baun, an activist from the Indonesian island of West Timor who won the 2013 Goldman Environmental Prize for her efforts to organise local villagers in peaceful ‘weaving’ protests at marble mining sites in protected forest areas on Mutis Mountain, told IPS, “Women have to practically scream for their voices to be heard right now.”

Her tireless activism over many decades has won her recognition but also exposed her to danger. She recalled an incident over 10 years ago when she received death threats but had no support network – neither local nor international – to turn to for help.

The same holds true in India, where research by the International Union for Conservation of Nature (IUCN) found that although rural women spend, on average, 30 percent of their day searching for water, very few resources exist to support them, or study the impact of this grueling task on their families and health.

Experts like Odendahl contend that funders need to get out of the silo mentality and concentrate on the overall impact of climate change, environmental degradation, commercial exploitation of resources and even dangers faced by women activists as parts of one big puzzle.

Tools like the recently released report can be used to bridge the gap and connect actors and organisations that have hitherto operated alone.

INWF Executive Director Emilienne De Leon Aulina told IPS, “It is a slow process. We have now began the work; what we need to do is to keep building awareness among decision makers and results will follow.”

One such example is a potential project between the Urgent Action Fund and the Indonesian Samadhana Institute on mapping the impact of threats faced by female environmental activists, which have witnessed a disturbing rise in the past decade.

A study by Global Witness entitled ‘Deadly Environment’, which analyses attacks on land rights defenders and environmental activists, found that between 2002 and 2013 at least 903 citizens engaged in environmental protection work were killed – a number comparable to the death toll of journalists during that same period.

Because women environmental activists tend to focus on local and community-based issues, the dangers they face go largely undocumented.

For a person like Baun, who has faced multiple death threats and at least one threat of a gang rape, both awareness and funding have been slow in coming.

“I have been facing these issues for over 15 years, and it is only now that people have started to take note. But at least it is happening – it is much better than the silence.”