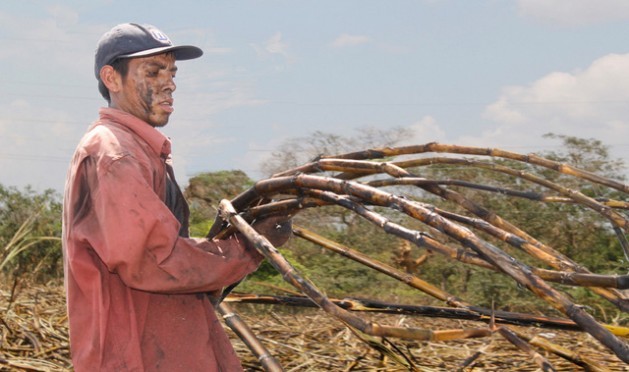 Cane cutter Evaristo Pérez, 22, on the La Isla plantation in the municipality of San Juan Opico in El Salvador. He used to be a child worker in the sugar cane fields in El Salvador, where child labour has been practically eradicated thanks to a policy of “zero tolerance” in the sugar industry. Credit: Edgardo Ayala/IPS

SAN JUAN OPICO, El Salvador , Apr 6 2015 (IPS) - The participation of children and teenagers in the sugar cane harvest, a dangerous agricultural activity, will soon be a thing of the past in El Salvador, where the practice drew international attention 10 years ago.

“Before, when I was a kid, my brothers would take me along to help them cut sugar cane, it wasn’t a problem. But now things have changed,” Evaristo Pérez, a day labourer, told IPS during a break from his work in the sugar cane field under a blistering sun on the La Isla plantation in San Juan Opico, a municipality in the department of La Libertad in western El Salvador.

“I had to turn 18 before I could start working as a cane cutter,” added 22-year-old Pérez, standing next to a group of two dozen other cane cutters covered in dirt and sweat. He admitted that working in the sugar cane fields as a boy was “really tough.”

Child labour in activities described by the International Labour Organisation (ILO) as dangerous or unhealthy has long been rife in El Salvador. That includes cutting sugar cane, hazardous because of the sharp machetes used, as well as the practice of burning sugar cane ahead of the harvest to facilitate the work, which produces ashes to which the cutters are exposed.

The sugar industry generates 50,000 direct jobs in El Salvador, although 18,000 of them are seasonal, out of a total of 250,000 people working in the sector, according to industry statistics.

Sugar cane cultivation covers three percent of the country’s farmland. The big sugar mills process only 10 percent of the output; the remaining 90 percent is in the hands of 7,000 independent producers, 4,000 of whom are grouped in cooperatives, in a country where agriculture generates 20 percent of all jobs.

The severe poverty suffered by many rural families kept child labour alive, despite the risky work and heavy, long workdays.

“At the bottom of this cultural and economic phenomenon lie poverty and the lack of opportunities in the countryside,” said Julio César Arroyo, executive director of the El Salvador sugar industry association (AAES), which groups the six privately owned sugar mills that process the country’s sugar cane.

In this Central American country of 6.3 million people, 38 percent of the population lives in rural areas, where 36 percent of the households are poor, above the national average of 29.6 percent, according to official statistics from 2013.

The problem of child labour in the sugar cane harvest in El Salvador was thrust to the forefront in June 2004 when the Washington-based Human Rights Watch published the report “Turning a Blind Eye: Hazardous Child Labor in El Salvador’s Sugarcane Cultivation”.

The report triggered a strong reaction by human rights groups as well as international buyers of El Salvador’s sugar. Canada, the second-biggest market after the United States, threatened to stop buying sugar from this country.

The position taken by Canada “was worrisome because it could have caused a domino effect,” leaving thousands of rural workers without an income, Arroyo told IPS.

Due to the Human Rights Watch report on child labour and the resulting pressure, sugar cane producers, sugar mills and the government, grouped together in the Salvadoran Sugar Industry Council (CoNSaa), jointly adopted a code of conduct in 2006.

They stepped up the process a year later with the inclusion of a clause declaring “zero tolerance” of child labour.

They also implemented measures to oversee compliance with the clause, by means of ongoing monitoring by the Labour Ministry, inspectors on plantations and a special external auditor.

“We’ll be satisfied once the problem has been fully eradicated, but great progress has definitely been made,” Arroyo said.

Another positive factor has been that poor rural families have gradually understood that it is important to keep children and teenagers out of the sugar cane fields.

Pablo Antonio Merino, the foreman at the La Isla plantation, told IPS that he knows very well that he can’t hire minors to cut sugar cane, even if they ask him for work.

“They’re not going to find a single minor among my workers,” said the 63-year-old Merino. “Sometimes kids come to my house to ask me to do them a favour and hire them, but when I see how young they are, I tell them no, that I don’t want trouble.”

But there is still resistance to the change.

Another worker, David Flores, 53, told IPS that the ban on child labour in the industry causes problems by leaving adolescents with nothing to do, which leads them down “the wrong path” – a reference to the youth gangs that are rife in this country.

“It has hurt the country to take work away from young people, because they end up as vagrants,” Flores argued.

But Ludin Chávez, the director in El Salvador of the international organisation Save the Children, told IPS that child labour must be eradicated because children grow up in an environment where exploitative conditions are seen as normal.

“They see it as natural that other people exploit them, and that they can never defend their rights; we see this as a dangerous vicious circle,” she said.

Other forms of hazardous child labour are shellfish harvesting in the mangroves, the production of fire crackers in sweatshops, and domestic service, she added.

The 2013 household survey found that 144,168 children and adolescents between the ages of five and 17 were involved in child labour – a nearly 12 percent reduction from 2012.

Since 2009, when the left-wing Farabundo Marti National Liberation Front (FMLN) came to power, the government outlined a plan to eradicate the worst forms of child labour this year, with a goal to totally eliminate it by 2020, in a joint effort with a wide range of economic and social sectors.