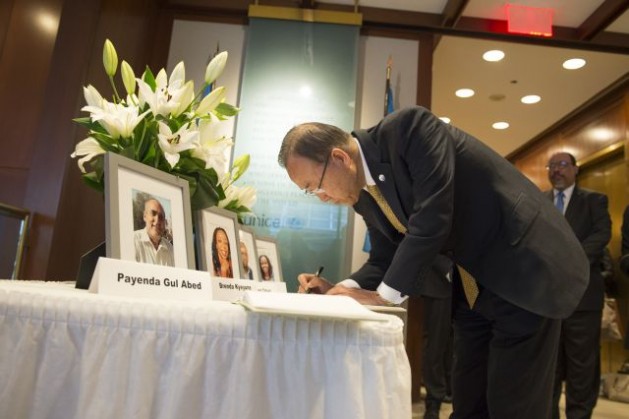 Secretary-General Ban Ki-moon signs a book of condolences at UNICEF (UN Children’s Fund) headquarters, on the death of the agency’s staff members killed in the 20 April attack on a vehicle in which they were riding in Garowe, Somalia. Credit: UN Photo/Eskinder Debebe

UNITED NATIONS, Apr 29 2015 (IPS) - When the United Nations spent over 2.2 billion dollars refurbishing its ageing 65-year-old Secretariat building, one of its primary goals was to strengthen security to prevent any violent attacks on the glass house by New York city’s East River.

With a voluntary donation of nearly 100 million dollars from the United States as host country (in addition to its assessed contribution for the renovations), the United Nations has installed bollards and other security devices enhancing the entrances and perimeters of the campus where more than 3,000 staffers now work in a modernised and energy-efficient 39-storeyed high-rise building.

"We hope [Secretary-General Ban Ki-moon] will recognise the fact that the U.N. has to start making some tougher choices about whether it actually has the means to be able to operate in dangerous locations and protect its staff." -- Ian Richards

The new security measures are expected to be in place by next year while the refurbishment that began in 2008 – financed by the 193 member states with assessed contributions based on “capacity to pay” – is virtually complete.

Acutely conscious of its security, the United Nations is also planning to empty and shut down its historic Dag Hammarskjold library building, keeping it permanently vacant, because of possible terrorist attacks from an adjacent roadway and an exit ramp from the highway – both of which the U.S. government is refusing to close down because it is “not feasible” to do so in a traffic-clogged city.

Still, say U.N. staffers, while they appreciate the protective measures in home territory, the world body has not placed as high a priority on their safety and security in emergency operations in conflict zones.

According to the latest statistics, attacks on U.N. staffers have continued to increase over the last decade – with a record high of 264 attacks, affecting 474 aid workers, in 2013 alone.

In early April, four staffers working for the U.N. children’s agency UNICEF were killed in “a horrific attack” in Somalia as a result of a roadside bomb destroying their minivan.

The increasing deaths and the continued attacks have prompted the U.N. staff union to call for the establishment of an independent high-level panel to review U.N. security.

Asked if the establishment of such a panel is at the discretion of member states or a decision by Secretary-General Ban Ki-moon, Ian Richards, president of the Coordinating Committee of International Staff Unions and Associations (CCISUA), representing 60,000 staffers, told IPS the staff union is requesting Ban to set up the panel.

“So it is entirely his discretion. But we hope he will recognise the fact that the U.N. has to start making some tougher choices about whether it actually has the means to be able to operate in dangerous locations and protect its staff,” he said.

In a statement released here, the CCISUA said it has been 10 years since the United Nations Department of Safety and Security was created in the aftermath of the 2003 Canal Hotel bombing in Baghdad. 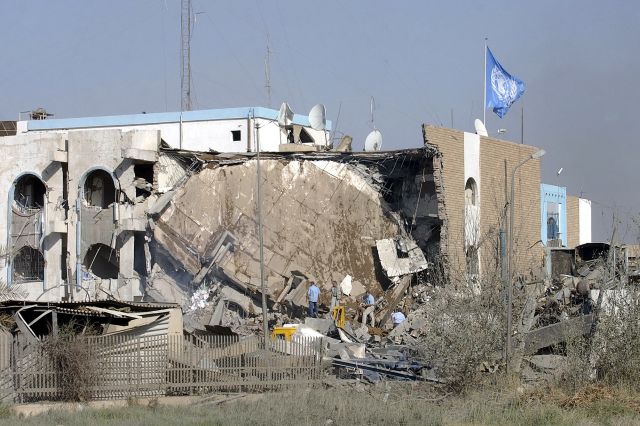 Employees at the United Nations headquarters in Baghdad, Iraq, search through the rubble after an explosion in 2003 that killed at least 17 people including the Secretary-General’s Special Representative for Iraq, Sergio Vieira de Mello. Credit: UN Photo/AP Photo

Since that time, the United Nations has been the target of numerous attacks.

The panel should find answers to questions such as: Is the United Nations doing enough to protect its staff? Is the world body better off today in protecting its staff with the Department of Safety and Security? Is it subjecting staff to unnecessary risks with the “stay and deliver” policy?

The CCISUA has also sought answers to several other questions: What were the circumstances of the latest attack (in Somalia), and should anyone be held accountable for the gaps in security leaving staff vulnerable to those types of attacks?

Have politics taken precedence over proper security concerns, since stricter measures were not in place in Puntland, an area that has suffered deadly attacks and repeated threats by the Al Qaeda-linked al Shaabab, a terrorist group that has threatened and repeatedly attacked United Nations staff in Somalia in the past?

The 2008 Report of the Independent Panel on Safety and Security of U.N. Personnel and Premises Worldwide (Brahimi Report) noted that “Member States are not equally well-equipped to provide that security. Indeed, it is quite often in those countries where capacity is modest or lacking all together that the most serious risks exist. All the United Nations can and should expect from the host government is that it provides security to the best of its ability.”

“It is incumbent to the Organization in particular the Secretary-General, and the Department of Safety and Security, to fill in this void, including by ensuring that proper policies, procedures and standards are established and always followed – which in the instance of the latest attack would have born no monetary cost to the Organization,” the statement said.

The Staff Union thinks the secretary-general’s policy of “stay and deliver”, combined with “do more with less”, has shown its limits and has placed staff in more of a high-risk situation than at any time before.

Thus, the Staff Union calls on the secretary-general to immediately initiate a review of security policies worldwide and an investigation into the circumstances surrounding the latest attack on the organisation, so that future such attacks may be prevented.

“The Staff Union believes we owe this to all staff and the families of the victims. The Secretary-General, as chief administrative officer of the United Nations, has an inherent responsibility to seek to ensure the safety of staff,” the statement said.