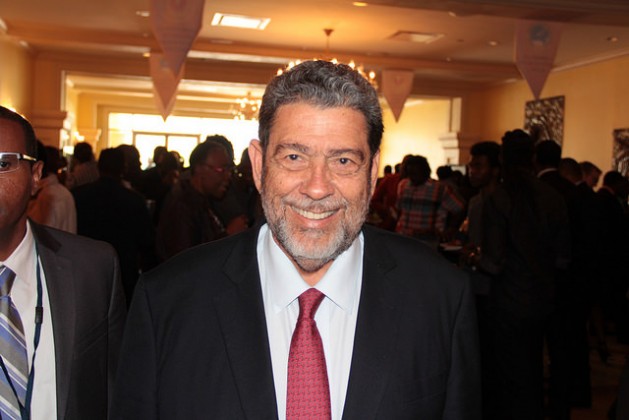 BASSETERRE, St. Kitts, May 22 2015 (IPS) - By the time leaders of the international community sit down in Paris later this year to discuss climate change, at least two Caribbean leaders are hoping that France can demonstrate its commitment to assisting their adaptation efforts by re-joining the Barbados-based Caribbean Development Bank (CDB).

The CDB is the premier regional financial institution, established in 1969. It contributes significantly to the harmonious economic growth and development of the Caribbean, promoting economic cooperation and integration among regional countries.

“The government of France has been taking a lead in relation to this matter in all fora and [President] Hollande has put his own personal prestige behind it." -- Prime Minister Ralph Gonsalves

Of the 19 regional member countries that are allowed to borrow funds from the CDB and also have voting rights, 15 are members of the Caribbean Community (CARICOM).

In addition, Canada, China, Germany, Italy and the United Kingdom all enjoy voting rights but, like Colombia, Mexico, and Venezuela, they are not entitled to borrow funds from the bank.

France was once a non-regional member, but withdrew its membership about a decade ago, supposedly because of domestic politics.

Now, two Caribbean prime ministers say with the region being among the countries worst affected by climate change and struggling to find the resources to fund adaptation and mitigation efforts, it is time for France to rejoin the CDB.

The lobby began on May 9 in Martinique, when French President François Hollande visited the French overseas territory to chair a one-day Caribbean climate change summit ahead of the world climate change talks in Paris during November and December of this year.

During the plenary, St. Vincent and the Grenadines Prime Minister Dr. Ralph Gonsalves raised with Hollande the issue of France’s CDB membership.

Prime Minister of St. Kitts and Nevis Dr. Timothy Harris, who is chair of the CDB’s Board of Governors, the bank’s highest policy making body, told the two-day 45th meeting of the board, which began on May 20, how Gonsalves raised the issue with his French counterpart.

“Caught by Gonsalves flighted googly, the president played just as Gonsalves had predicted and committed to have France returned as a member of the CDB,” Harris said, using an analogy from the Caribbean’s rich cricketing culture.

Harris further said that building resilience to climate change and natural disasters remains among the issues that “need critical attention in the context of reshaping a credible agenda for Caribbean development”.

He told IPS afterwards it would be “a significant win-win for us all” if Hollande follows through on his commitment to rejoin the CDB.

“It think it will enhance France’s own involvement in the region but beyond the region as a major country interested in bringing justice to small island developing states, many of which are found in the Caribbean region,” he said.

When France left the financial institution it raised issues such as the reputation of the bank, because France had been an important member and also had good credit ratings.

“Therefore, it coming back again will signal that it has renewed its confidence in the bank. Given France’s own standing as a member of the G20, that will be a positive in terms of the reputation for the CDB. And, therefore, when the bank wins, the people of the Caribbean, whom it serves, they also win and also all of us in the region,” Harris told IPS.

An economist, Harris said the Paris talks will “only bear fruits for us if in fact it makes special provisions for the vulnerabilities of small island developing states.

“… if a member of the G20 group such as France provide leadership in Europe and beyond, certainly it would be a good signal of that commitment for him to reinter into the CDB as a member,” he said, noting that climate change will continue to be high on the agenda of the CDB during his chairmanship.

“It has already been identified by the president of the bank as one of the areas in which the bank wants to have a forward thrust,” he told IPS.

CDB president Dr. William Warren Smith said that the Caribbean has already begun to experience “the damaging effects and associated economic losses of rising sea levels and an increase in the number and severity of natural hazards”.

He said that to participate effectively in climate change adaptation and mitigation, including exploiting the region’s vast renewable energy resources, the CDB must be able to access climate finance from the various windows emerging worldwide.

Smith, addressing the board of governors meeting, said that institutions from which climate finance can be accessed “understandably, have set the access bar extremely high”.

However, he stressed that the CDB has undergone reforms that will position the institution to gain wider access to climate resources.

“I am pleased to say that by the end of this year, we expect to be accredited to both the Adaptation Fund and the Green Climate Fund,” he said, adding that at a recent meeting of Caribbean foreign ministers in Berlin, he proposed the immediate establishment of a “Project Preparation Facility” for Caribbean countries.

This facility, to be managed by CDB, would enable the bank’s borrowing member countries to develop a pipeline of “bankable” projects that would be eligible for climate financing.

“These projects would climate-proof roads and other critical infrastructure. They would also address the vulnerability of our islands and coastal zones in order to protect vital industries, such as tourism, agriculture and fisheries,” Smith said.

Gonsalves told IPS that “there are several consequences, all of them positive, for France coming back to the CDB.”

He said France will be able to bring resources at the level of Germany, which currently holds a 5.73 percent stake in the capital of CDB, making Germany the third-largest non-regional, non-borrowing member.

“More broadly, France, of course, as the host for the Paris Summit and what was promised at Fort-de-France as the steps we will take, they again are going to play an important role and to do some things conjoining with us.”

Gonsalves noted that the Caribbean will attend climate change related summits in Brussels, Addis Ababa, and at the United Nations ahead of the Paris Summit.

Gonsalves said he is confident that France is committed to an outcome that will benefit the Caribbean and other small island developing states that suffer the brunt of the negative impacts of climate change.

He was also confident that France will rejoin the CDB.

“As Harris said, the manner in which I put it, it was very difficult for him to say no,” he told IPS.