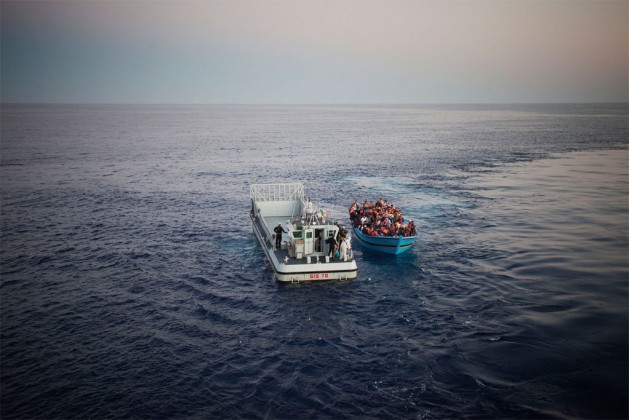 A boatload of people, some of them likely in need of international protection, are rescued in the Mediterranean Sea by the Italian Navy. The UN at 70 must “be fit for the purpose … otherwise it would be letting down people in need and compromising its legitimacy”. Photo credit: UNHCR/A. D’Amato

VIENNA, May 14 2015 (IPS) - Events are being organised around the world to celebrate the 70th anniversary of the founding of the United Nations, but a recent seminar held in the Austrian capital was not held to applaud the body’s past contributions.

Rather, the 45th International Peace Institute (IPI) Seminar, held from May 6 to 7,  saw representatives from the political, NGO, media and military sectors come together to discuss the organisation’s capability to deal with the crises and challenges of the future.

There was consensus among participants that the difficulties in the realms of international peace and security are very different today from those that dominated the international community at the time of the foundation of the United Nations in 1945.

Not only has the number of member states quadrupled since then, the global scenario has seen the entry of non-state “actors” such as criminals and terrorists representing a real threat to stability of the international system that the United Nations was set up to safeguard.

At the same time, the planet is afflicted by other threats that do not stop at national borders, such as climate change, pandemics and wars, which have global dimensions and are extremely difficult to contain in our globalised world.

As Martin Nesirky, Director of the United Nations Information Service (UNIS) in Vienna, put it: “The UN grew from the ashes of World War Two and there has been no global conflict since then, but neither has there been global peace.”

This year, debate about reform of the United Nations comes at a time that represents a possibility for change and action on two major fronts.

Furthermore, there are hopes that a global agreement on climate change will finally be reached in Paris in December at the U.N. Climate Change Conference.

According to U.N. Secretary General Ban Ki-Moon, “this is not just another year, this is the chance to change the course of history.”

However, the not all participants at the IPI seminar were convinced that the United Nations could fulfil its destined role without adapting to the fast changing circumstances that shape the world community.

A hotly debated issue was the long demanded reform of the U.N. Security Council and the power of veto held by its five permanent members – China, United States, France, United Kingdom and Russian Federation – which were said not to represent the world community.

Some participants noted that the current geopolitical situation is marked by a breakdown of power relations which have complicated the work of the United Nations enormously.

Richard Gowan, Research Director at New York University’s Center on International Cooperation (CIC) and a Senior Policy Fellow at the European Council on Foreign Relations (ECFR), expressed his concern about the escalation of power struggles in recent years.

“Tensions between Russia and the West, and to some extent China and the West, have severely impaired the UN’s ability to deal with the Syrian crisis and stopped the UN having a serious role in the Ukrainian crisis altogether.”

He called for resolution of ongoing geopolitical competition to enable the United Nations to regain the strength to deal with pressing crises” and warned that “if the Security Council breaks down, the rest of the UN will ultimately break down.”

Meanwhile, as the world faces the most severe refugee crisis since the Second World War, it was stressed that the proper functionality of international institutions – and of the United Nations in particular – is of the highest importance. More than 53 million people worldwide have been forcibly displaced today, a figure equal to the entire population of South Korea.

The last tragic incidents of hundreds of refugees drowning in the Mediterranean have shown that the international community is failing to ensure the security of those seeking a safe future in Europe. “Desperation has no measure and no cost,” said Louise Aubin, Deputy Director of the Department of International Protection at the U.N. High Commissioner for Refugees (UNHCR).

During her work for the U.N. refugee agency, Aubin came face to face with the situation of the world’s largest refugee camp in Dadaab, Kenya, situated some 100 kilometres from the Kenya-Somalia border, which houses an estimated 500,000 Somali refugees, some of whom are third generation born in the camp.

“It’s impossible for me to explain as a parent that I would actually accept that situation,” Aubin said.” There is no way I would not do anything in my power to try to send my children somewhere else. And that somewhere else is across the Mediterranean.”

In the light of the recent tragedies suffered by refugees, participants said that it is necessary to create safe access to asylum in order for refugees to enjoy the rights that are theirs under international law.

It is clear that this responsibility does not lie only with the United Nations, they agreed, pointing to the role of the European Union in dealing with refugee flows.

However, both the United Nations and the European Union are only as strong as their member states allow them to be.

If the UN at 70 turns out not be fit for the purpose, it has to take immediate measures to become so – otherwise it would be letting down people in need and compromising its legitimacy.