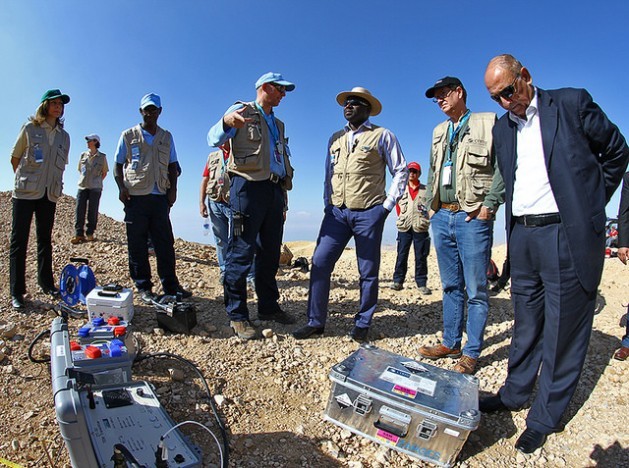 CTBTO Head Lassina Zerbo overseeing the equipment in use during the Integrated Field Exercise IFE14 in Jordan from Nov. 3 to Dec. 9, 2014. Photo Courtesy of CTBTO

UNITED NATIONS, Jun 17 2015 (IPS) - The world’s nuclear powers may succeed in thwarting sanctions by the Security Council or avoiding condemnation by the General Assembly, but they cannot escape the scrutiny of a key international watchdog body: the Comprehensive Nuclear-Test-Ban Treaty Organization (CTBTO).

Literally, its monitoring network keeps its ear to the ground tracking down surreptitious nuclear tests – while also detecting earthquakes and volcanic eruptions in near real-time or tracking large storms and drifting icebergs.”

Some compare the system to a combined giant Earth stethoscope and sniffer that looks, listens, feels and sniffs for planetary irregularities.

And the network never sleeps because it has been working around the clock ever since it was installed 18 years ago – primarily to detect nuclear explosions above ground and underneath.

The network is a way to guard against test ban treaty violations because the Comprehensive Nuclear-Test-Ban Treaty (CTBT) prohibits nuclear explosions worldwide: in the atmosphere, underwater and underground.

“The CTBTO’s International Monitoring System has found a wider mission than its creators ever foresaw: monitoring an active and evolving Earth,” Dr. Lassina Zerbo, Executive Secretary of CTBTO, told IPS.

He said some compare the system to a combined giant Earth stethoscope and sniffer that looks, listens, feels and sniffs for planetary irregularities.

The CTBTO’s global monitoring network now comprises 300 stations, some in the most remote and inaccessible areas of the Earth and sea.

The network captures four types of data: seismic (shockwaves in the earth), hydroacoustic (measuring sound through water), infrasound (low frequency sound) and radionuclide (radioactivity). It is about 90 percent complete.

When completed, the system will have 337 stations placed globally to monitor every corner of the planet effectively.

“Even before entering into force, the CTBT is saving lives,” says U.N. Secretary-General Ban Ki-moon.

Currently, the network collects some 15 gigabytes of data daily, which it sends in real-time to the CTBTO’s data analysis centre in Vienna, Austria.

From there, a daily analysis report is sent to the CTBTO’s 183 Member States for their own use and analysis.

This universal system of looking, listening and sniffing the Earth is the work of CTBTO, which every two years hosts a scientific and technical conference.

This year’s Science and Technology Conference is scheduled to take place June 22-26 at the Hofburg Palace in the Austrian capital of Vienna.

The CTBTO’s monitoring network has had a superlative track record: on Feb. 12, 2013, 94 of the network’s seismic monitoring stations and two of its infrasound stations detected and alerted Member States to a nuclear detonation more than an hour before North Korea announced it had conducted a test.

Three days later, on Feb. 15, 2013, the CTBTO’s infrasound monitoring stations detected signals made by a meteor that had entered the atmosphere and disintegrated in the skies over Chelyabinsk, Russia.

The CTBTO network – described as the only global one of its kind to detect infrasound – recorded the shock wave caused by the exploding fireball.

That data helped scientists to locate the meteor, measure the energy release, its altitude and size.

And the system’s atmospheric sampling tracked the invisible plume of radioactivity from the March 2011 Fukushima Daiichi nuclear power plant disaster, as it spread around the globe.

It showed that radioactivity outside of Japan was below harmful levels. That knowledge helped public safety officials around the world understand what course of action to take, according to CTBTO.

Additionally, it has enhanced the alerts that civil aviation authorities use, in real time, to warn pilots about damaging volcanic dust; provide more precise information about climate change; increased understanding of the structure of the Earth’s inner core; and followed the migratory habits and the effects of climate change on marine life.

To access the data, the CTBTO has created a Virtual Data Exploitation Centre which provides scientists and researchers from many different disciplines with data for research and enables them to publish new findings.

“The International Monitoring System is a fantastic tool for monitoring the planet’s core, atmosphere, oceans, or environment,” says Dr. Raymond Jeanloz, professor of Geophysics and Astronomy at the University of California, Berkeley.

“The CTBTO data give us a glimpse of the Earth’s deep interior -what’s happening there and how it evolved over Earth’s history,” says Professor Miaki Ishii, Department of Earth and Planetary Sciences, Harvard University.

And Randy Bell, director of the CTBTO’s International Data Centre, says: “The global data are extremely valuable because they span decades, are high quality and highly calibrated. The data can be used to analyse local, regional or global events.”

Bell says that his primary job is to look for nuclear tests, but allowing the data to be used for science gets more experts looking at the data.

“What may be noise to me might be a signal to someone else,” he says.

The CTBTO says that though many countries have their own seismic monitoring systems, the CTBTO monitors are “global, permanent, calibrated and the data are shared equally.”

Its seismic network has been monitoring infrasound extending all the way to sub-Saharan Africa, Eastern and Southern Africa, Indonesia and Antarctica.

The CTBTO also has a network of underground listening posts located in some of the world’s most remote waters listening to earthquakes in the Andes Mountains and around the northern Pacific.

The data has been used to track the migratory habits of a particular species of Blue Whale in the Indian Ocean.

“The nations of the world have invested about one billion dollars to create The Global Ear,” says Dr. Zerbo.

“Every year they continue their investment, hoping it will never have to be used for its intended purpose of detecting a violation of the Nuclear-Test-Ban Treaty. Civil and scientific spinoffs show the world immediate payback and in turn increase support for the Treaty.

“As more scientists and organisations make use of the data, the value has become ever more apparent,” says Dr. Zerbo.