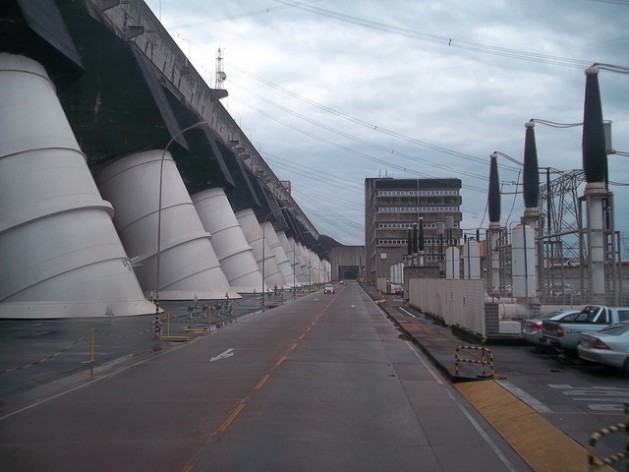 Large-scale energy and logistical infrastructure initiatives in Brazil are notorious for their delays. The majority of railways, ports, highways and power plants are several years behind schedule. Credit: Darío Montero/IPS

NEW YORK, Jun 11 2015 (IPS) - According to new data released by the World Bank Tuesday, investments in infrastructure in 139 emerging economies shot up to 107.5 billion dollars in 2014, with just five countries – Brazil, Colombia, India, Peru and Turkey – accounting for 73 percent of the total.

"The concept of ‘appropriate scale’ has been deleted from […] policy discourse because now instead of ‘small is beautiful’, the catchphrase is ‘big is better’.” -- Nancy Alexander, director of the Economic Governance Program at the Heinrich Böll Foundation
Based on a review of investments in some 6,000 projects in 139 low- and middle-income countries between 1990 and 2014, the data show that the energy sector accounted for the greatest number of new projects, but the transport sector captured the largest amount of investment, securing 55.3 billion dollars or 51 percent of the total.

These mega-projects include 11 major ventures, eight of them in the energy sector, in Peru alone, amounting to over eight billion dollars, the largest of which, the Lima Metro Line 2, brought in 5.3 billion dollars in investment.

Not all regions are seeing an increase. Both India and China experienced declines last year, with the latter witnessing its lowest infrastructure investment levels since 2010, at 2.5 billion dollars. India’s commitments dropped down to 6.2 billion dollars.

In sub-Saharan Africa investment plunged from 9.3 billion in 2013 to 2.6 billion in 2014, although increased infrastructure activity in Ghana, Kenya and Senegal suggests that the downward trend might soon be reversed.

Despite uneven investment levels globally, the Bank estimates that spending on infrastructure projects in 2014 represents 91 percent of the five-year average between 2009 and 2013.

In a statement released on Jun. 9, Bank officials claimed, “This is the fourth highest level of investment commitments ever recorded, exceeded only by levels seen from 2010 through 2012.”

What this data reveals is that a global consensus to bolster public-private partnerships in mega-projects is bearing fruit.

Practically every major international organisation from the United Nations to multilateral development banks believe that strengthening road, energy and transport networks are crucial at a time when one billion people lack access to an all-weather road, 783 million people live without clean water supplies and 1.3 billion people are not connected to an electricity grid.

But a closer look at the track records of these gigantic infrastructure projects and new plans for financing them suggests that pouring billions of dollars into highways and dams in the developing world not only enriches some of the wealthiest sectors of the population, they also threaten to further impoverish the poorest, thereby widening global inequality.

‘Appropriate Scale’ – a thing of the past

The world’s most cited scholar on mega-project management and planning, Bent Flyvbjerg of Oxford University, found that on average only one in 1,000 mega-projects is completed on time, within its stated budget and with the ability to deliver what was promised.

Flyvbjerg’s extensive database on the subject reveals that approximately nine out of every 10 large-scale projects incur cost overruns, often over 50 percent of the stated budget – an expense borne primarily by taxpayers.

According to Nancy Alexander, director of the Economic Governance Program at the Heinrich Böll Foundation, these massive projects can cost “potentially billions and trillions of dollars, so when they go over budget and over time, they can devastate the national budget of a country.”

Alexander told IPS that, while there is a very real need for improved infrastructure, particularly in developing countries, there is an equally urgent need to tailor such ventures towards those who would most benefit from the services.

“Whether they are in education, healthcare, water or electricity, projects really need to be appropriate in scale to meet their goals. But the concept of ‘appropriate scale’ has been deleted from […] policy discourse because now instead of ‘small is beautiful’, the catchphrase is ‘big is better’.”

Part of the reason for this change, experts say, is the push to use investment in infrastructure to finance development, particularly by strengthening public-private partnerships and by ‘financialising’ investment.

Research by the Heinrich Böll Foundation reveals that the G20 group of major economies aims to finance the so-called infrastructure gap by tapping into the roughly 80 trillion dollars in long-term private institutional finance – from pension funds to insurance schemes – by creating infrastructure as an “asset class”.

Under this model, governments will undertake a range of public-private partnerships (PPPs) and financial institutions will package and sell financial products “that offer long-term investors a stake in a portfolio of PPPs”.

“When speculators take stakes in physical infrastructure,” the organisation says, “such infrastructure is subject to the whims of herds of investors [and] could trigger instability in the provision of basic services.”

Already, a lack of evidence on the success of PPPs suggests that the current pace of investment in infrastructure with private participation is at best a gamble – and at worst a recipe for disaster.

Other research indicates that mega-projects seldom lead to improvement in access to basic services, since many such ventures are undertaken to serve global, rather than local, demand.

“Energy projects, for instance, are often launched to serve a mine, or you’ll see a dam or power plant built for the same purpose – as is the case with the Inga Dam in the Democratic Republic of the Congo,” Alexander explained.

The very countries highlighted in the Bank’s latest update have a poor track record of successfully managing mega-projects.

Large-scale energy and logistical infrastructure initiatives in Brazil, for instance, are notorious for their delays, while the majority of railways, ports, highways and power plants are several years behind schedule.

Meanwhile, back in April, an expose published by the International Consortium of Investigative Journalists (ICIJ) revealed that in the course of a single decade, some 3.4 million people were evicted from their homes, torn away from their lands or otherwise displaced by projects funded by the World Bank.

Fifty percent of those displaced by large-scale ventures – ostensibly aimed at improving water and electricity supplies or beefing up transport and energy networks in some of the world’s most impoverished nations – reside in Africa, or one of three Asian nations: China, India and Vietnam.

The investigators further alleged that the Bank and its private-sector lending arm, the International Finance Corp, pumped 50 billion dollars into projects that financed governments and companies accused of human rights violations.

Brent Blackwelder, president emeritus of Friends of the Earth International, told IPS that “planning bigger and bigger projects despite the failure rate proves what Einstein said: that the definition of insanity is doing the same thing over and over again and expecting different results.”