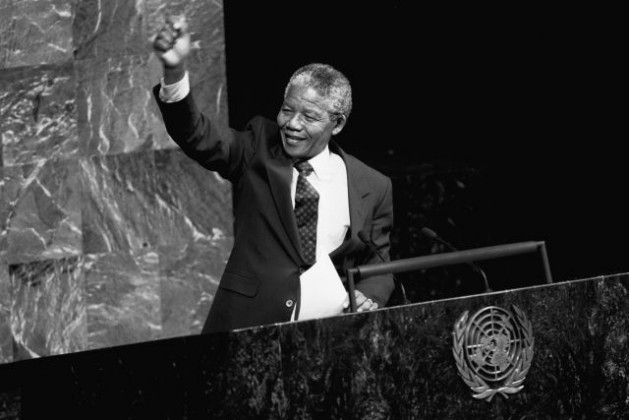 Nelson Mandela, Deputy President of the African National Congress of South Africa, raises his fist in the air while addressing the Special Committee Against Apartheid in the General Assembly Hall, June 22, 1990. Credit: UN Photo/Pernaca Sudhakaran

They are Dr. Helena Ndume of Namibia, and Jorge Sampaio of Portugal.

Kutesa said that the winners were chosen from about 300 applicants for the prize from a variety of sources, including member states as well as observer states of the U.N., institutions of higher education, intergovernmental organisations and NGOs.

The Prize was established in June 2014 by the General Assembly to recognise the achievements of those who dedicate their lives to the service of humanity by promoting the purposes and principles of the United Nations, while honouring and paying homage to Nelson Mandela’s extraordinary life and legacy of reconciliation, political transition, and social transformation.

Dr. Ndume is a Namibian ophthalmologist, widely renowned for her charitable work among sufferers of eye-related illnesses in Namibia. Dr. Ndume has ensured that some 30,000 blind Namibians have received eye surgery and are fitted with intra-ocular lens implants free of charge.

She is currently the head of the ophthalmology department at Windhoek Central Hospital, Namibia’s largest hospital, and is one of only six Namibian ophthalmologists. Ndume has also set up eye camps in Angola, working with international organisations to bring eye surgery to the country’s poor.

Jorge Sampaio is a Portuguese lawyer and politician who was president of Portugal from 1996 to 2006. He became a leader in the struggle for the restoration of democracy in his country, and also served as deputy minister for external cooperation and as mayor of Lisbon from 1989 to 1995.

He is a strong advocate of the European integration project, actively supported its enlargement to all democratic countries in Europe as well as to Turkey, and played an active role in engaging ordinary people, in particular youth, in public debates on European affairs.

Sampaio is now a member of the Club de Madrid, a grouping of more than 80 former democratic statesmen that works to strengthen democratic governance and leadership worldwide by drawing on the experience of its members.

In May 2006, Sampaio was appointed by the United Nations Secretary-General as his first Special Envoy for the Global Plan to Stop Tuberculosis, where he raised the international visibility of this poverty disease’s scale and its impact on the Millennium Development Goals’ agenda.

In April 2007, U.N. Secretary-General Ban Ki-moon designated him as High Representative for the Alliance of Civilizations, a position he held till September 2012.

Ban said the United Nations hoped to carry on Mandela’s “lifelong work through this meaningful prize.”

Chaired by the President of the General Assembly, the United Nations selection Committee for the Prize this year was composed of the Permanent Representatives of Algeria, Latvia, Mexico, Saudi Arabia and Sweden, representing the five United Nations geographical regional groups.

The Permanent Representative of South Africa was an ex-officio member of the Committee. The U.N. Department of Public Information served as the secretariat.

The award ceremony will take place on July 24 at United Nations Headquarters in New York. It will be part of the annual commemoration by the General Assembly of Nelson Mandela International Day.