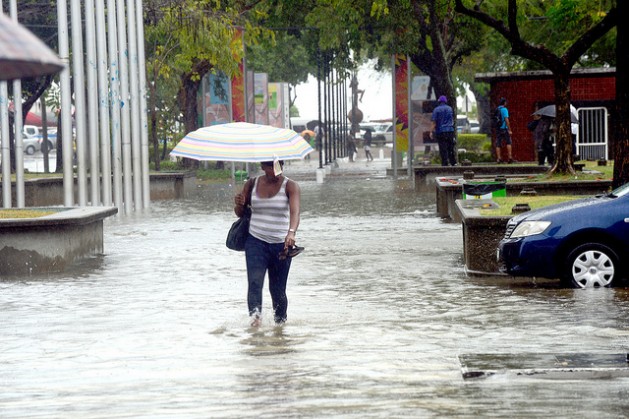 Feast or famine: Just three years ago, flooding in Trinidad's capital of Port of Spain left residents little choice but to wade through the deluge. But lately drought has become a problem in the dry season. Credit: Peter Richards/IPS

PORT OF SPAIN, Jun 23 2015 (IPS) - Starting in 1999, the Water and Sewerage Authority (WASA) of Trinidad and Tobago began a 10-year effort to map the country’s water quality. They started to notice a worrying trend.

The watersheds in the western region of Trinidad had progressed from being of moderate quality in some places to being outright bad. By 2010, a survey of the country showed more than 20 per cent of the watersheds were in serious trouble.

“By adopting these ecological measures to protect our river water supplies, we can reduce the need for more energy intensive and more costly measures of obtaining water such as desalination.” -- Dr. Natalie Boodram

WASA received a lot of bad press during the recently concluded dry season. Residents whose communities were roiled with protests almost weekly over lack of access to potable water vehemently criticised the agency while waving placards and publicly burning tyres.

WASA is the designated body responsible for all of Trinidad and Tobago’s water sources and supply.

But factors beyond its control, like climate change and climate variability, are significant contributors to the crisis.

“During the dry season we would have longer droughts so we will not have as much water for groundwater recharge,” explained Samm, adding, “there is more intense rainfall for a given time period and because of continued development we have more flooding problems during the rainy season.”

That has resulted in more surface runoff “and that water is being flushed through the watercourses and out to sea. Therefore, we have less recharge of our groundwater systems,” he explained.

He told IPS that 60 per cent of Trinidad and Tobago’s potable water comes from surface water sources.

There has also been major housing construction along the east-west corridor of Trinidad, he pointed out. “With climate change and the increase in impervious cover (due to urbanisation) the recharge of our groundwater system will be reduced,” Samm said. As well, “with urban growth, you see garbage in the rivers – refrigerators.”

Though river adoption programmes are known in several states in the U.S., the programme in Trinidad and Tobago is among the first for the Caribbean.

WASA’s decision to focus on preserving ecosystems was a forward-looking approach to the issue of sustainably ensuring access to potable water for all, as evident from observations made in the Executive Summary of the United Nations World Water Development Report 2015. Commenting on the water situation worldwide the report states the following:

“Most economic models do not value the essential services provided by freshwater ecosystems, often leading to unsustainable use of water resources and ecosystem degradation. Pollution from untreated residential and industrial wastewater and agricultural run-off also weakens the capacity of ecosystems to provide water-related services.

“Ecosystems across the world, particularly wetlands, are in decline. Ecosystem services remain under-valued, under-recognized and under-utilized within most current economic and resource management approaches. A more holistic focus on ecosystems for water and development that maintains a beneficial mix between built and natural infrastructure can ensure that benefits are maximized.”

In keeping with the U.N.’s Millennium Development Goals’ focus on reducing poverty and environmental degradation by helping communities to help themselves, the UNDP provided funds for one of Trinidad and Tobago’s Adopt-A-River participants

Through its Global Environment Facility’s Small Grants Programme (SGP), the UNDP provides funds and technical support to civil society organisations working on “projects that conserve and restore the environment while enhancing people’s well-being and livelihoods at the community level.”

The Social Justice Foundation, which works in underdeveloped areas of Central and South Trinidad, received funding of just under 50,000 dollars from the SGP, which it matched with 65,000 dollars of its own money to sponsor an Adopt-A-River programme involving at-risk and disadvantaged youths in the communities of Siparia and Carlsen Field.

The programme ran for nine months from September 2014 to June 2015, during which time young people have been trained as eco-leaders and taught skills in water testing to monitor the health of the rivers in their communities, using La Motte test kits, as well as video production to record the work done.

They learned how to test for temperature, pH, alkalinity, turbidity, dissolved oxygen, phosphate and nitrate and to record the changes in these parameters over the nine months of the project.

The Caparo River in Central Trinidad and Coora River in South Trinidad were the two rivers adopted by the Social Justice Foundation for their Adopt-A-River initiative.

Though the programme has enjoyed some favourable response from communities and schools, corporate support for the programme has not been as great as the Adopt-A-River unit would have liked. However, Samm said, the unit has been successful in its Green Fund application and will be furthering its community outreach with the funds awarded.

Preserving the health of the rivers was also based on financial considerations, said Raj Gosine, WASA’s head of Water Resources. “It is very expensive to treat poor water quality, so WASA’s motive was also financial.”

“The key thing is to stress that we can all make a positive contribution,” Gosine added.

“By adopting these ecological measures to protect our river water supplies, we can reduce the need for more energy intensive and more costly measures of obtaining water such as desalination.”