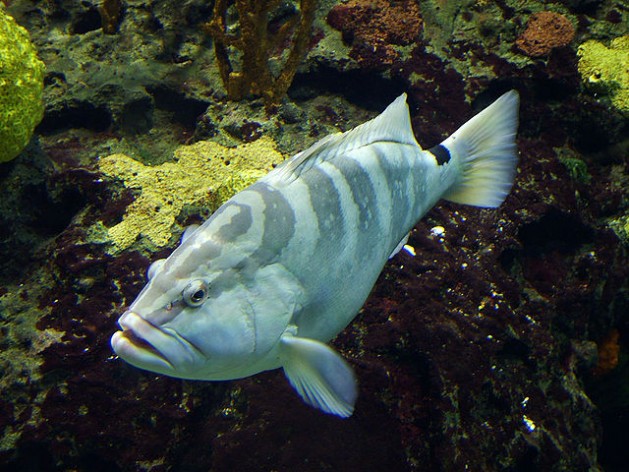 The Nassau grouper is one of 19 Caribbean species the Wild Earth Guardians say are in need of protection. Credit: Rick Smit/cc by 2.0

Regional groups and the U.S.-based NGO Wild Earth Guardians have petitioned for the listing of some of the Caribbean’s most economically valuable marine species as vulnerable, endangered or threatened with extinction.

In addition, regional scientists believe that climate change could alter the ranges of some of the larger species and perhaps wipe out existing ones.

“TCI’s conch stocks are now in a critical phase. This means that unless the fishery is closed to allow the stocks to recover, it will probably collapse within the next four years." -- Biologist Kathleen Woods

Fisheries ministers of the Caribbean say they are concerned that “extra-national activities and decisions” could impact the social and economic well being of their countries and their access to international markets. They have agreed to work together to protect both the sustainability and trade of several high value marine species.

At a meeting in November 2014, the Ministerial Council of the Caribbean Regional Fisheries Mechanism (CRFM) expressed alarm at the U.S. government’s decision to list the Nassau Grouper, a commercially traded species, under the U.S. Endangered Species Act (ESA).

Even after successfully thwarting the listing of the Queen Conch (Strombus gigas), they fret that other species would go the way of the Nassau Grouper.

The conch and Nassau grouper are two of 19 Caribbean species the Wild Earth Guardians say are in need of protection. The list includes one coral, one ray, five sharks, two sawfish, four groupers and the Queen Conch.

Regional fisheries officials know that such listings will shut down international trade of the affected species. Alternatively, it could lead to rigorous permits and quota systems that prevent trade by vulnerable populations in countries that are without working management structures.

The Guardians say they are driven by the critical state of many Caribbean species and the seemingly insatiable U.S. demand for them. The 14 marine species named are already listed as protected or threatened by the International Union for Conservation of Nature (IUCN), endangered species associate Taylor Jones told IPS.

“Specifically in terms of the conch, we note that the U.S. appetite for conch meat is having an impact on stocks in the Caribbean,” she said.

Jones noted that when the Guardians take action the aim is to limit the impact of U.S. consumption patterns – which has already caused the collapse of its own conch fishery – on the rest of the world. The United States is the largest importer of conch meat, consuming 78 per cent of production, estimated at between 2,000 and 2,500 pounds annually.

While the Guardians failed in their bid to have the conch included in the ESA, concern for the struggling populations of Conch continue. Even though the U.S. closed Florida’s Conch fisheries in 1986, the population has still not recovered and the fisheries in its Caribbean territories are also in poor shape.

In the Turks and Caicos Islands (TCI), one of the region’s largest exporter of the mollusk, biologist Kathleen Woods reports that conch stocks are on the brink of collapse.

“TCI’s conch stocks are now in a critical phase,” she said. “Preliminary results of the conch visual survey indicate that TCI does not have sufficient densities of adult conch to sustain breeding and spawning. This means that unless the fishery is closed to allow the stocks to recover, it will probably collapse within the next four years.”

The CRFM Secretariat says it is already looking at management plans for the species most eaten or exploited by its member states. The secretariat says there is evidence that Nassau Grouper populations and spawning aggregations are in decline and is supporting the listing. 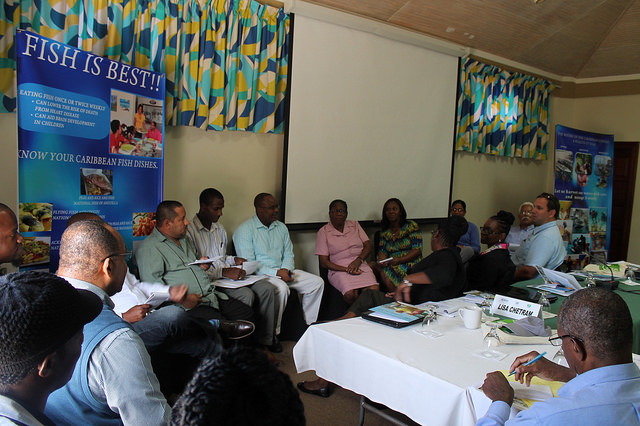 The Secretariat has drafted a strategy to implement minimum standards for the management, conservation and protection for the Caribbean Spiny Lobster (Panulirus argus) across all 17 member states. The Secretariat cites concern for falling catches, declining habitats and the absence of adequate management systems in some countries.

In Jamaica, where the lobster and conch fisheries are regulated by the CITES endangered species treaty, authorities are extending protection to other local species that are already stressed from overfishing and climate change, Director of Fisheries Andre Kong told IPS.

“We are looking at bio-degradable traps and will where possible improve the existing management system to include the spotted spiny lobster (Panulirus guttatus) known locally as the chicken lobster,” he said, pointing out that the local species is not governed by the CITES regulations.

Caribbean favorites like the Parrotfish and sea eggs (sea urchins) are in serious decline. Regional groups are seeking to ban those and other species to protect remaining populations and the reef.  Some countries have already restricted the capture of the Parrotfish and the IUCN has recommended its listing as a specially protected species under the Protocol for Specially Protected Areas and Wildlife (SPAW Protocol).

CRFM has already implemented a management plan for the Eastern Caribbean Flying fish, which supports a small but lucrative trade in the countries that fish for the species. A coral reef action plan is also in place, a review of the legislation of several member states has been completed, alongside the rollout of public awareness programmes for regional fishers. One drawback: the rules are non-binding and left up to individual governments to implement.

Woods, who until mid-2014 headed the TCI government’s Environment and Marine Department, noted that despite the existence of regulations that exceed those introduced by the CRFM, conch and lobster habitats in that country “continue to be degraded and lost because of poor development practices like dredging, the use of caustic materials like bleach for fishing and other activities.”

Veteran TCI fisherman Oscar Talbot echoes Woods belief that a combination of factors, including a lack of political will, poor enforcement and corruption in the regulatory agencies, are the reasons the Conch stocks are close to collapsing.

“Poacher boats, illegal divers and some politicians with their own (processing) plants have played a role in the improper exploitation of the fish, lobster and conch. We also have a lot of fisherman and poachers taking juvenile conch in and out of season,” he said.

TCI is one of the few countries that continue to allow the capture and consumption of sea turtles and sharks, but Woods believes exploitation of these species by locals is sustainable. Talbot wants fishers to stick to the rules and exploit the resources during the open seasons only.

A fisherman for over 40 years, Talbot said the unregulated catches are impacting all the islands’ local fisheries. He is concerned that undersized conchs of up to 18 to the pound have been taken, a sore point for the grandfather who sits on the fisheries advisory council of the TCI.

But while regional leaders express “outrage” at the actions of the NGOs, regional fishers support Talbot’s view that only external pressure will force governments to act.

For most countries, the lack of personnel, funding and illegal fishing have hampered progress. This is not lost on the Guardians.

“In general it appears that the region is struggling with limited resources for conservation, including lack of funding and lack of personnel for enforcement of existing regulations,” Jones said.

And while Talbot and Woods lobby TCI Governor Peter Beckingham to champion immediate changes to the fisheries legislation approved and agreed by local fishers more than a year ago, Jones echoes their aspirations:

“It is our hope that ESA listing would make more U.S. funding and personnel available for use by local conservation programmes,” she said.