Opinion: SDGs, FfD and Every Single Dollar in the World 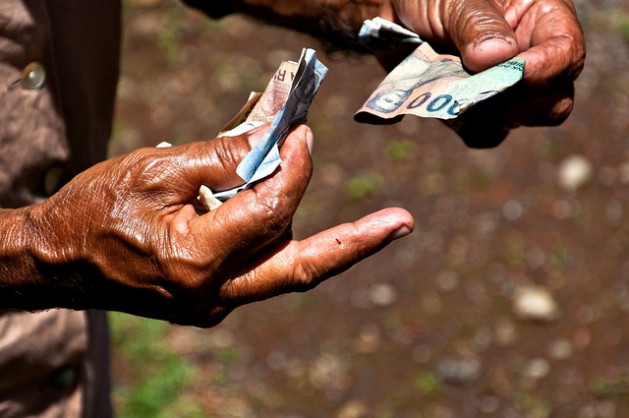 The answer to the question “How much money will it take to achieve the new SDGs?” is … drum-roll … every single dollar in the world. Credit: Bindalfrodo/cc by 2.0

UNITED NATIONS, Jul 7 2015 (IPS) - Ethiopia will host an important meeting on Financing for Development (FfD) Conference next week. One of the most-asked questions is:  How much will it cost us to achieve the Sustainable Development Goals (SDGs)?

The question sounds sensible at first glance and flows naturally from our experience of the Millennium Development Goals (MDGs).

The grand MDG deal was that poor nations would focus on reducing poverty and improving governance, in exchange for Official Development Assistance (ODA) that would top up resources mobilised by developing countries themselves.

This ‘gap filling’ logic led to expansive exercises in MDG costing, estimations of how quickly governments could improve their tax take, and campaigns to scale up aid.

Many governments responded, and a great deal of good has been done through development aid: Expanded vaccine programmes, more children in school, cleaner water for more people, and many more less measurable achievements like gradually strengthening institutional capacities.

But as we now move to a different development agenda – one that is more ambitious, complex, integrated and universal – our logic on financing also needs a radical overhaul.

While gap-filling will still be important for some countries with very low tax bases and underfunded challenges (like some communicable diseases), for the majority it will be much more about aligning existing resources.

So the answer to the question “How much money will it take to achieve the new SDGs?” is … drum-roll … every single dollar in the world.

This means that every dollar we spend as consumers should work in the direction of achieving the SDGs and not against them. This includes our spending on clothes, food, and travel.

But voluntary action by consumers will not be enough. Companies will also have to play their part.

Some are starting to change their business models realising that building a sustainable business will require a sustainable world. Some are engaging in development impact investment.

But beyond these voluntary actions, governments will need to step up and play the critical role of creating the right incentives and regulations to align actions by all consumers, businesses and investors.

While aligning private finance is the big win, changing how we spend public monies will also require a major overhaul. The classic example is energy: If we continue to subsidise non-renewable energies, we are deliberately and consciously working against the Goals.

Globally, energy subsidies are estimated to reach five trillion dollars this year, approaching 20 percent of GDP in some countries. They are overwhelmingly directed towards fossils fuels.

Sometimes incentives, regulation, and fiscal reform are seen as imposing costs. Attention is drawn to these costs by those directly affected, with less attention given to society-wide and long-term benefits.

And many inefficiencies that are staring us in the face can unlock trillions more in gains. For instance, advancing gender equality would directly advance the SDGs and generate economic benefits.

Arguing that aligning existing finance with sustainable development is more important than raising ever more money shouldn’t be interpreted as support for the anti-aid movement. Done well, aid has its place.

Donors should indeed meet their 0.7 percent commitments and make much faster progress on their commitments on improving how aid is done.

But if the Conference in Addis Ababa, scheduled to take place next week, only focuses on mobilizing more money and doesn’t do something about improving how that money is spent, then we will have missed the point, and will certainly miss the grand targets we have set for ourselves. This is why every dollar counts.