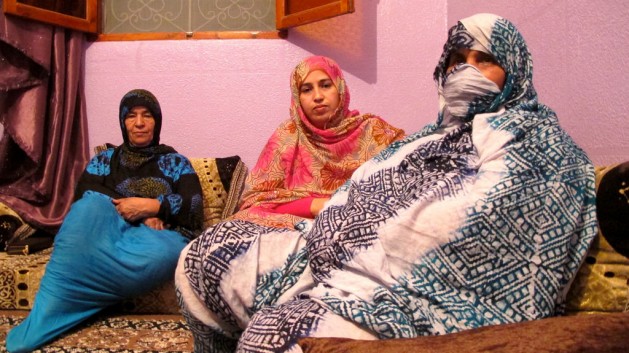 LAAYOUNE, Occupied Western Sahara, Jul 17 2015 (IPS) - Ten women are gathered to discuss how to transmit Sahrawi culture and tradition to the younger generations. As usual, it´s a secret meeting. There is no other way in the capital of Western Sahara.

Rabab Lamin chose the place and the date for this latest meeting of the Forum for the Future of Sahrawi Women, an underground organisation yet seemingly far from being disorganised.

“We set up the committee in 2009 and today we rely on 60 active members, an executive committee of 16 and hundreds of collaborators,” Lamin, the mother of a political prisoner, tells IPS.

“Here you´ll hardly come across any Sahrawi who has not been mistreated by the police, nor a family who has not lost one of their own" – Aza Amidan, sister of a Sahrawi political prisoner
“Our goal is to fight for the fundamental rights of the Sahrawi people through peaceful struggle,” adds the 54 year-old woman, before noting that she was born “when the Spaniards were here.”

This year will mark four decades since Spain pulled out of Western Sahara, its last colony, leaving the territory in the hands of Morocco and Mauritania. While Rabat claims that this vast swathe of land – the size of Britain – is its southernmost province, the United Nations labels it as a “territory under an unfinished process of decolonisation.”

Since the ceasefire signed in 1991 between Morocco and the Polisario Front – the authority that the United Nations recognises as a legitimate representative of the Sahrawi people – Rabat controls almost the whole territory, including the entire Atlantic coast.

Only a tiny desert strip on the other side of the wall built by Morocco remains under Sahrawi control. That´s where the Sahrawi Arab Democratic Republic (SADR) was announced in 1976, a political entity today recognised by 82 countries.

The most immediate consequence of Sahara´s frozen conflict was the displacement of almost the entire Sahrawi people to the desert of Algeria. Those who dared to stay still suffer the consequences of their decision:

“Since the Moroccans took over our land we have only faced brutality,” laments Aza Amidan, the sister of a political prisoner. “We are constantly harassed and beaten; they raid our houses, they arrest our men and women, even kids under 15.

“Here you´ll hardly come across any Sahrawi who has not been mistreated by the police, nor a family who has not lost one of their own,” says Amidan. The 34-year-old activist stresses that the founder and current leader of the Forum, Zukeine Ijdelu, spent 12 years in prison. Sahrawi women activists who have taken to the streets in Laayoune, capital of occupied Western Sahara, are often forcibly dispersed. Credit: Mohamed Salem

In a report issued two months ago, Amnesty International labels the practice of torture in Morocco as “endemic” while underlining that Sahrawi political dissidents are among the main targets. The NGO also accused the Moroccan government of “protecting the torturers, and not the tortured.”

Sahrawi activists claim that one of the main tasks of this women´s organisation is to support, “both morally and economically”, those who have suffered prison or their relatives. Amidan gives the details:

“We gather money among the community for those women as they are always the ones who suffer most. Whether it´s them who are arrested or their husbands, it´s them who have to sustain their families.”

Despite several phone calls and e-mails, the Moroccan authorities refused to speak to IPS on these and other human rights violations allegedly committed in Western Sahara.

At 62, Fatima Hamimid is one of the senior veteran activists of the Forum. She says torture is “something that can one can cope with.” But there are other grievances that are seemingly “irreparable”.

“Today’s workshop sought to raise awareness among the new generations over the cultural assimilation we´re being subjected to at the hands of Rabat. Morocco seeks to deny our mere existence by either erasing our history or including it into their own.”

The most eloquent proof of such policies may be the total absence of Hassaniya –the Arabic dialect spoken by Sahrawis – in the education system or the administration.

However, Hamimid also points to other issues such the explicit ban over the Sahrawi traditional tent, the harassment  women wearing their distinctively colourful garb often have to face, or the prohibition of giving names that recall historical Sahrawi dissidents to their children.

“This is yet another reason that drags us to the streets to organise and take part in demonstrations,” notes Hamimid. Peaceful protests, she adds, are another important axis of action of this group.

But it is neither easy nor free of risks. In its World Report 2015, Human Rights Watch denounces that Rabat has “prohibited all public gatherings deemed hostile to Morocco’s contested rule.”

The New York-based NGO also points to the “large numbers of police who blocked access to demonstration venues and often forcibly dispersed Sahrawis seeking to assemble.”

Under such circumstances, Takbar Haddi chose to conduct a hunger strike for 36 days in front of the Moroccan consulate in Gran Canaria (Spain), which ended with her hospitalisation in June.

Haddi is still asking the Moroccan authorities to deliver the body of her son, Mohamed Lamin Haidala, stabbed in February in Laayoune, and that both the circumstances of the crime and the alleged lack of an adequate health assistance be investigated.

The activist´s close relatives in Laayoune told IPS that the family had rejected an economic compensation from Rabat in exchange for their silence.

“Some people think that being free is just not languishing in prison, or not suffering torture,” explains Hamimid, while she serves the last of the three cups of tea marking Sahrawi tradition. “We, Sahrawi women, understand freedom in its full meaning.”