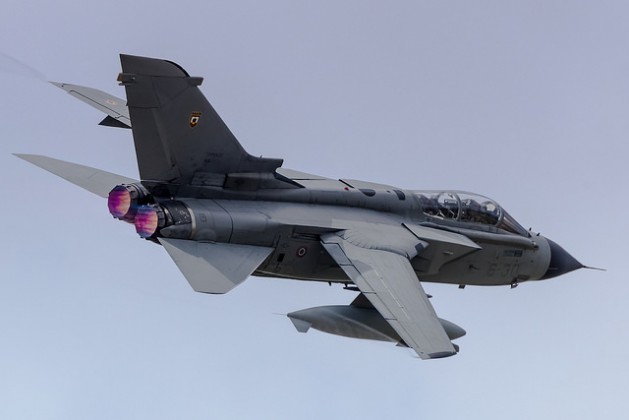 The Tornado aircraft was developed and built by Panavia Aircraft GmbH, a tri-national consortium that includes British Aerospace (previously British Aircraft Corporation); it has played a small role in the war in Yemen. Credit: Geoff Moore/CC-BY-2.0

UNITED NATIONS, Aug 25 2015 (IPS) - Of the 402 children killed in Yemen since the escalation of hostilities in March 2015, 73 percent were victims of Saudi coalition-led airstrikes, a United Nations official said Monday.

In a statement released on Aug. 24, Leila Zerrougui, the special representative of the secretary-general (SRSG) for children and armed conflict, warned that children are paying a heavy price for continued fighting between Houthi rebels and a Gulf Arab coalition, led by Saudi Arabia, bent on reinstating deposed Yemeni President Abd-Rabbu Mansour Hadi.

Incidents documented by the U.N.’s Country Task Force on Monitoring and Reporting suggest that 606 kids have been severely wounded. Between Apr. 1 and Jun. 30, the number of children killed and injured more than tripled, compared to the first quarter of 2015.

Zerrougui said she was “appalled” by heavy civilian casualties in the southwestern Yemeni city of Taiz, where 34 children have died and 12 have been injured in the last three days alone.

Gulf Coalition airstrikes on Aug. 21 resulted in a civilian death of 65; 17 of the victims were children. Houthi fighters also killed 17 kids and injured 12 more while repeatedly shelling residential areas.

In what the U.N. has described as wanton ‘disregard’ for the lives of civilians, the warring sides have also attacked schools, severely limiting education opportunities for children in the embattled Arab nation of 26 million people, 80 percent of whom now require emergency humanitarian assistance.

According to the United Nations Children’s Fund (UNICEF), 114 schools have been destroyed and 315 damaged since March, while 360 have been converted into shelters for the displaced who number upwards of 1.5 million.

On the eve of a new school year, UNICEF believes that the on-going violence will prevent 3,600 schools from re-opening on time, “interrupting access to education for an estimated 1.8 million children.”

With 4,000 people dead and 21 million in need of food, medicines or shelter, children also face a critical shortage of health services and supplies.

Doctors Without Borders (MSF) teams in Yemen say they have “witnessed pregnant women and children dying after arriving too late at the health centre because of petrol shortages or having to hole up for days on end while waiting for a lull in the fighting.”

MSF also faults the coalition-led bombings for civilian deaths and scores of casualties, adding that the Houthi advance on the southern city of Aden has been “equally belligerent”.

On Jul. 19, for instance, indiscriminate bombing by Houthi rebels in densely populated civilian areas resulted in 150 casualties including women, children and the elderly within just a few hours.

Of the many wounded who flooded an MSF hospital, 42 were “dead on arrival”, and several dozen bodies had to remain outside the clinic due to a lack of space, the humanitarian agency said in a Jul. 29 press release.

Appealing to all sides to spare civilians caught in the crossfire, Zerrougui said Yemen provides yet “another stark example of how conflict in the region risks creating a lost generation of children, who are physically and psychologically scarred by their experiences […].”

Ironically, despite the fact that Saudi-led airstrikes have been responsible for the vast majority of child deaths and casualties, the wealthy Gulf state pledged 274 million dollars to humanitarian relief operations in Yemen back in April, though it has yet to make good on this commitment.