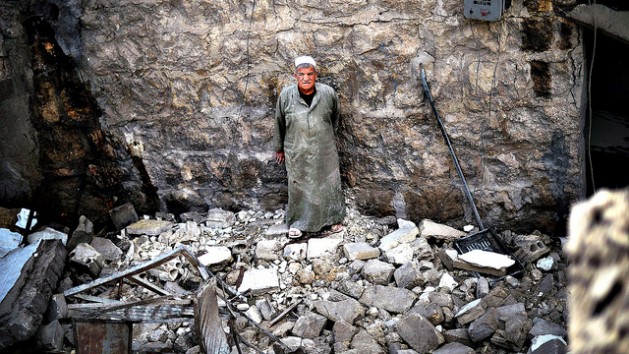 A man stands amid the rubble of a house following an airstrike in the northern Syrian city of Aleppo on Apr. 15, 2013. Credit: Freedom House/CC-BY-2.0

UNITED NATIONS, Aug 25 2015 (IPS) - The staggering statistics emerging from the ongoing five-year-old military conflict in Syria – including over 220,000 killed, more than one million injured and about 7.6 million displaced – are prompting calls for a United Nations arms embargo on the beleaguered regime of President Bashar al-Assad.

“Providing weapons to Syria while its forces are committing crimes against humanity may translate into assisting in the commission of those crimes, raising the possibility of potential criminal liability for arms suppliers." -- Peggy Hicks, global advocacy director at Human Rights Watch
But any proposed military sanctions will continue to hit a major roadblock because of opposition by Russia, a veto-wielding permanent member of the U.N. Security Council (UNSC), and the largest single arms supplier dating back to a 25-year Treaty of Friendship and Cooperation signed by Syria with the then Soviet Union in October 1970.

But most of these are ageing weapons systems, purchased largely in the 1970s and 1980s costing billions of dollars, badly in need of refurbishing or replacements.

As in all military agreements, the contracts with Russia include maintenance, servicing, repairs and training.

According to the latest report by Forecast International, a defence market research firm in the United States, Syria once hosted about 3,000 to 4,000 military advisers, mostly stationed in Damascus.

The Russians also forgave about 9.8 billion dollars in military debts (incurred during the Soviet era) paving the way for new arms agreements back in January 2005 – and ensuring Syria’s military survival against a rash of anti-Assad militant groups, including the Islamic State of Iraq and Syria (ISIS).

Peggy Hicks, global advocacy director at Human Rights Watch, told IPS Russia’s resistance to an arms embargo is a given, but Syria’s flaunting of the laws-of-war and of Security Council resolutions require a real response, not just more rhetoric.

“Providing weapons to Syria while its forces are committing crimes against humanity may translate into assisting in the commission of those crimes, raising the possibility of potential criminal liability for arms suppliers,” she said, adding: “Would such a step make a difference?”

Hicks pointed out that arms embargoes are not a perfect solution, but are a simple measure that doesn’t cost much to implement, and it would make it harder for the government to acquire new arms it could use to attack civilians.

“Action by the Security Council to impose an arms embargo would also send a strong message to Syria that its indiscriminate attacks on civilians must end. So why not impose one?” she asked.

Addressing the Security Council last November, Under-Secretary-General for Political Affairs Jeffrey Feltman pointed out the effectiveness of U.N.-imposed sanctions – from Afghanistan and Angola to Haiti and the former Yugoslavia.

“We know it is not perfect, but there is also no doubt that it works,” he said.

Since the first U.N. sanctions were imposed on Southern Rhodesia in 1966, there have been 25 sanctions regimes – either in support of conflict resolution, countering terrorism or to prevent the proliferation of nuclear and other weapons of mass destruction.

Currently, there are 15 sanctions regime in place – the highest number in the history of the United Nations.

Since the Syrian crisis began in 2011, both Russia and China have jointly vetoed four resolutions aimed at penalizing the Assad regime, the last one being in May 2014.

China, which supports the Assad regime, is not an arms supplier to Syria.

“This latest carnage is another reminder – if any was still needed – of the urgent need for the Security Council to act on its previous resolutions and take steps to stop indiscriminate attacks.”

On Feb. 22, 2014, the Security Council adopted a resolution demanding that “all parties immediately cease all attacks against civilians, as well as the indiscriminate employment of weapons in populated areas, including shelling and aerial bombardment.”

In August, following attacks on civilians, the Security Council issued a presidential statement reiterating its demands that all parties cease attacks against civilians as well as any indiscriminate use of weapons in populated areas.

HRW said Security Council members, including Russia, which has shielded the Syrian government from sanctions and accountability, should take immediate steps to enforce that demand.

In addition to an arms embargo, the Security Council should apply the same level of scrutiny it has put in place for chemical attacks to all indiscriminate attacks by monitoring these attacks, attributing responsibility for them, and sanctioning those responsible.

The Security Council should also refer the situation in Syria to the International Criminal Court, HRW said.