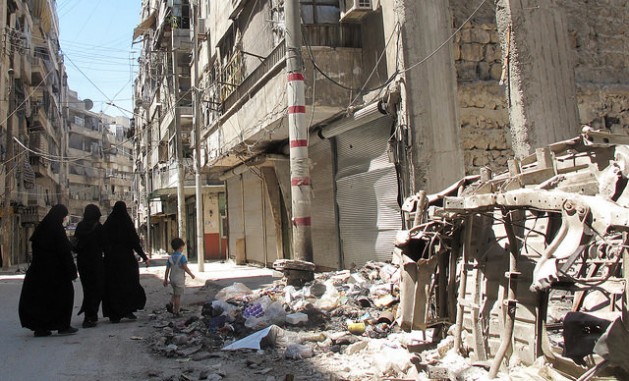 Many Syrian cities have been reduced to piles of rubble, as a civil war that is now well into its fifth year shows no signs of abating. Desperate refugees are fleeing to Europe to escape the fighting. Credit: Shelly Kittleson/IPS

UNITED NATIONS, Sep 3 2015 (IPS) - As the migration crisis in Europe continues to grow and government response remains slow, European citizens have taken it upon themselves to act by opening up their homes to those in need.

In a Facebook group entitled ‘Dear Eygló Harðar – Syria is Calling’, over 15,000 Icelanders have signed an open letter calling on their government to “open the gates” for more Syrian refugees.

The open letter, initiated by author and professor Bryndis Bjorgvinsdottir on Aug. 30, addresses Iceland’s Minister of Welfare Eygló Harðar and calls on the government to reconsider capping the number of refugees at a mere 50.

The week-long campaign, which ends on Sep. 4, aims to gather information about available assistance and to create pressure on the government to increase its quota.

“Refugees are our […] best friends, our next soul mate, the drummer in our children’s band, our next colleague, Miss Iceland 2022, the carpenter who finally fixes our bathroom, the chef in the cafeteria, the fireman, the hacker and the television host. People who we’ll never be able to say to: ‘Your life is worth less than mine’,” the open letter states.

Many have posted their own open letters, offering their homes, food, and general support to refugees, to enable them to integrate into Icelandic society.

One Icelander posted on the group: “I’m a single mother with a six-year-old son […] we can take a child in need. I’m a teacher and would teach the child to speak, read and write Icelandic and adjust to Icelandic society. We have clothes, a bed, toys, and everything a child needs. I would of course pay for the airplane ticket.”

The open letter has sparked more people around the world to express words of support and to offer their homes to those in need.

One mother of a 19-month-old baby from Argentina wrote in the group: “I want you to know that I would like to help in any way I can, even if it is looking at the possibility of hosting some boy or girl in my house […]. I don’t have a comfortable financial position, but I can provide what is necessary and a lot of love.”

Similar efforts to house refugees have begun in other parts of Europe.

Once hosts sign up to offer their homes, Refugees Welcome works with local refugee organizations to reach out to find a “suitable” match.

Though only Germany and Austrian residents can currently be hosts, over 780 people have already signed up to help and more than 134 refugees from Afghanistan, Burkina Faso, Nigeria, Iraq, Somalia, and Syria have been matched with families in the two countries.

Refugees Welcome also stated that the initiative has been picked up and may be expanded to the United States and Australia.

“We are convinced that refugees should not be stigmatized and excluded by being housed in mass accommodations. Instead, we should offer them a warm welcome,” says Refugees Welcome on its website.

European Union’s border agency Frontex revealed that in July 2015 alone, over 100,000 people migrated into Europe. Germany has stated that it expects up to 800,000 asylum seekers by the end of the year.