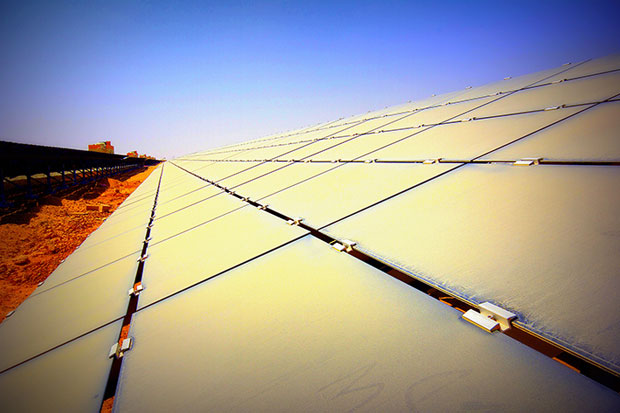 DUBAI, Sep 29 2015 (IPS) - To the ordinary eye, it looks like an empty desert but from this spit of endless sand is rising the largest photovoltaic solar project in the Middle East.

The Mohammed bin Rashid Al Maktoum Solar Park, located 30 miles south of Dubai, was launched with 13 megawatts of capacity. It could be producing 3,000 megawatts by 2030.

A similar project is rising in Morocco, future home of what may be the world’s largest concentrated solar power complex. Built in Quarzazate province, it is the kingdom’s answer to costly fossil fuel imports and climate change.

These two projects, along with other solar developments in Egypt, Jordan, Saudi Arabia and elsewhere, are demonstrating that the Middle East and North Africa will have a Plan B if oil prices continue to fall.

By contrast, sub-Saharan Africa has some of the world’s most abundant and least exploited renewable energy sources, especially solar power.

The need is undeniable. Today in Africa, 621 million people – two-thirds of the population – live without electricity. The problem is most acute in East Africa, where only 23 percent of Kenyans; 10.8 percent of Rwandans; and 14.8 percent of Tanzanians have access to an electricity supply, according to the World Bank.

But a new breed of “solar-preneurs” is emerging, increasing access to power and generating revenues at the same time.

“Solar is a valuable source of distributed energy,” says Sachi DeCou, co-founder of Juabar, a company running a network of solar charging kiosks in Tanzania.

“Here in Africa, populations are quite dispersed. Solar is modular so it can be sized to fit the needs of anywhere, from a light to a business, household to an entire village.”

M-Kopa Solar provides power to more than 140,000 households in East Africa for 0.45 dollar per day, and is adding over 4,000 homes each week. Revenues are nearing 20 million dollars per year, and the company is starting to license its technology in other markets, such as Ghana.

“Solar is a massive opportunity for entrepreneurs and investors alike,” Moore says.

In Rwanda, Henri Nyakarundi developed a mobile solar charging kiosk, operated under a franchise model that offers Rwandans the chance to run income-generating businesses by providing services such as charging of electronics and sales of electronic vouchers.

Opportunities to create solar businesses in Africa are huge, he says, but they only exist at the micro level. The next step is to produce power for the grid through solar, he adds, but this requires large investment and local banks are not yet willing to finance such projects unless you are a big company. (END)