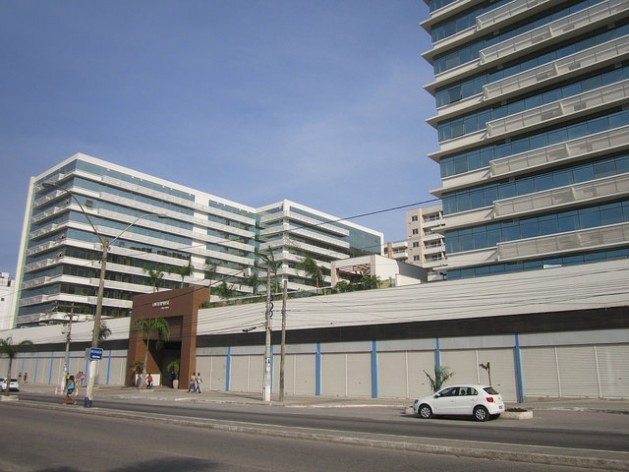 All of the offices, shops and locales in the modern two-building Enterprise complex are empty. It is one of the many white elephants left in the city of Itaboraí, in southeast Brazil, by the state-run Petrobras’ aborted petrochemical and oil industry megaproject. Credit: Mario Osava/IPS

ITABORAÍ, Brazil , Oct 23 2015 (IPS) - Itaboraí still recalls its origins as a sprawling city that sprang up along a highway, not far from Rio de Janeiro. But a few years ago big modern buildings began to sprout all over this city in southeast Brazil, whose offices and shops are almost all empty today.

The number of white elephants, or costly, useless constructions, in this city of 230,000 people was the result of “two huge shocks” caused by the Rio de Janeiro Petrochemical Complex (COMPERJ), Luiz Fernando Guimarães, the municipal secretary of economic development, told IPS.

“The first impact came from the 2006 announcement by then President Luiz Inácio Lula da Silva (2003-2010) of the project, which was to consist of two refineries and two petrochemical plants that would generate 221,000 jobs, according to the Getulio Vargas Foundation,” he said.

The estímate by the prestigious Rio de Janeiro-based think tank was larger than the entire population of the city, which stood at 218,000 in 2010, according to that year’s census.

The complex, belonging to Brazil’s state-run oil company Petrobras, was to cost around 6.5 billion dollars according to initial projections. But it ballooned to twice that, and will now only entail a single refinery with a capacity to process 165,000 barrels a day of oil. Construction of the petrochemical plants and the second refinery was cancelled.

The original announcement and the start of construction in 2008 “turned Itaboraí into an El Dorado, attracting people from across Brazil, as well as many foreigners. Rents skyrocketed, the prices of food and services soared, and the value of land for building housing more than doubled,” Guimarães said.

The employment of some 30,000 workers and the prospect of a surge in industrialisation around the petrochemical complex drew abundant investment, because of the expectation that the city, “one of the poorest in the country, would soon to enjoy great prosperity,” the municipal secretary of finance, Rodney Mendonça, told IPS.

The real estate boom in this city 45 km from Rio de Janeiro led to the construction of modern buildings, including two big hotels – instead of the four that were originally planned.

In just a few years, there were 4,000 new shops and office buildings, said Guimarães, whose office was renamed the Secretariat of Economic Development and Integration. The former oil industry executive is now in charge of relations between the city government and COMPERJ.

The second shock was the decision to reduce the project to a single refinery, which was only announced in 2014. “But the change happened in 2010, and the public was not informed,” the official said. “I knew because several subsidiaries of Petrobras and Braskem (Latin America’s biggest petrochemical company) pulled out of the consortium.” 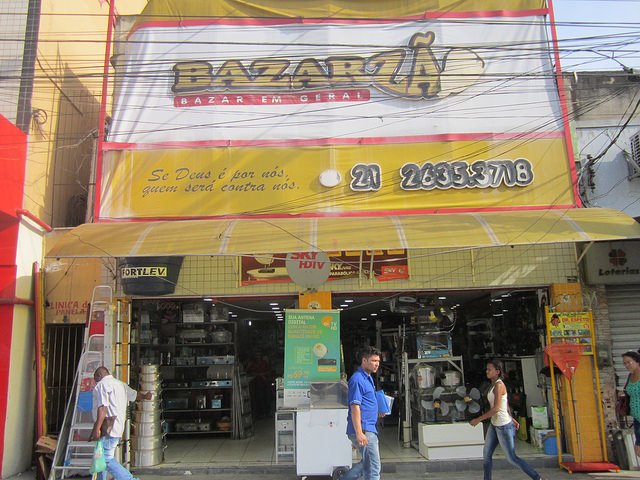 Bazarzão, which sells building materials and hardware in the city of Itaboraí, in southeast Brazil, saw its sales rise twofold when construction on the Rio de Janeiro Petrochemical Complex (COMPERJ) began. But they later plummeted when Petrobras cancelled the petrochemical side of the project. Credit: Mario Osava/IPS

“Imagine, a local university was getting ready to launch a new degree programme in petrochemical technology, with a view to the jobs that would be offered by COMPERJ. When I told him what was happening, the director just about killed me,” Guimarães said.

Not ony were the petrochemical plants and second refinery cancelled, but “construction of the first refinery stalled, and according to Petrobras, financing is being sought to finish it,” he said – even though it is 87 percent complete.

On the 45 sq km acquired for the construction of COMPERJ, Petrobras is forging ahead with the construction of the Natural Gas Processing Unit, which is now employing around 3,000 workers. “But after it is built, only 80 employees will be left to operate it,” said Guimarães.

The city has felt the blow. The shiny new commercial and office buildings are empty, and walking down the streets you see “to rent” or “to lease” signs everywhere, while most shops and other businesses are closed.

“The land of oranges turned into the land of white elephants,” joked Bruno Soares, the manager of a building materials, hardware and appliances store, Bazarzão, on 22 of May avenue, the main street in Itaboraí.

His store did not register as a COMPERJ supplier. Nevertheless, it has suffered the effects. “Our sales have fallen 50 percent since late 2014,” he estimated, although he admitted that they actually returned to the levels prior to the boom that was cut short.

“Business went up and down in five years, too quickly. Other stores closed and neighbouring towns were also hurt,” he said.

“Itaboraí would be a powerhouse in Latin America if the petrochemical complex was doing well, but it all came crumbling down because of the corruption,” Soares maintained. 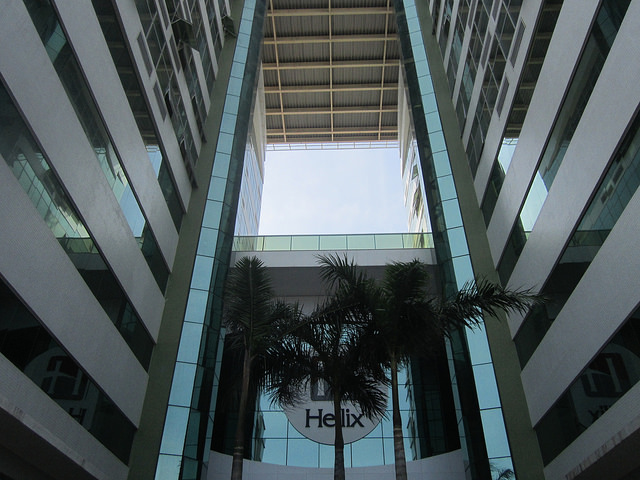 The entrance to the nearly empty Hellix luxury office building. The local Secretariat of Economic Development in Itaboraí, in southeast Brazil, moved into several of the offices because of the low rent, driven down by the lack of demand after Petrobras drastically cut back its oil and petrochemical industry megaproject nearby. Credit: Mario Osava/IPS

That is a common conclusion reached by the public – and not only in Itaboraí – in response to the daily reports on the kickback scandal involving Petrobas projects, including COMPERJ, in which dozens of politicians and construction companies have been implicated.

Valcir José Vieira, the owner of a parking lot in downtown Itaboraí, concurs with Soares. “Between 2006 and 2014 my parking lot was always full – 200 cars a day came in. Today, I receive 100 at the most,” he told IPS.

The decline in the number of cars began in November 2014, and forced him to reduce his fees from five to two reais (1.30 dollars to 52 cents) an hour.

For the city government the disaster is twofold. Tax revenue plunged, while expenditure, which was driven up by the frustrated megaproject and the illusion of progress, continued to increase.

The tax on services, the municipal government’s main source of income, brought in around 64 million dollars a year during the COMPERJ construction boom – an amount that will fall 40 percent this year, according to forecasts by the local Secretariat of Finance.

Revenue from other taxes is also falling, due to the insolvency faced by companies in crisis.

Meanwhile, public spending has not dropped. The influx of workers and their families drawn by the prospect of jobs and prosperity drove up demand for healthcare, schools and other public services.

“The number of people who visited the emergency room of the Municipal Hospital climbed from 500 a day, to 2,000 since 2013,” said Mendonça, the finance secretary. The city government dedicates 30 percent of its budget to healthcare – double what is required by law, he pointed out.

And the administration that left office in 2012 hired 2,000 new public employees through competitive examinations, based on the increased demands and projected new revenue flow. And although the tax revenue dropped, the new civil servants can’t be laid off, because they enjoy guaranteed job stability in Brazil. So that increase in expenditure remains in place.

The two municipal secretaries complained that there was no compensation from COMPERJ for the impacts in the municipality, nor investment to mitígate the damaging effects of the shrinking megaproject.

In the face of these challenges, the city government is seeking alternatives to fuel development. Guimarães is convinced that logistics will be the main future activity in Itaboraí.

The city is located at the intersection of several highways, outside of the congested Rio de Janeiro metropolitan region, and in the centre of an area of oil industry activity – unrelated to COMPERJ – ports, shipyards and various industries, he pointed out.

At the same time, the municipalities affected by the downsizing of the COMPERJ project mobilised to pressure Petrobras to at least resume construction of the first refinery.

Itaboraí is also focusing on boosting small businesses. Guimarães’ Secretariat of Economic Development created a centre for entrepreneurs, aimed at expediting the creation of microenterprises and formalising the ones currrently operating in the informal sector of the economy.

Small firms that refurbish or expand housing, and beauty salons are the most frequent businesses opening at this time. “They rival the evangelical churches,” the head of the centre, Wilson Pereira, told IPS.