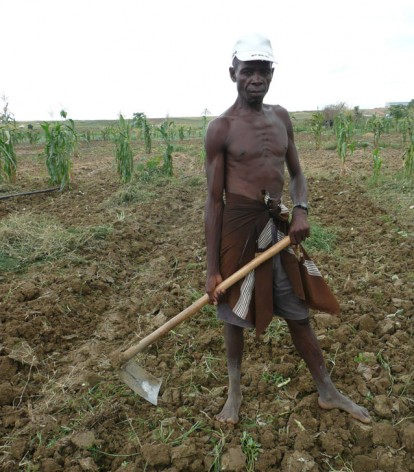 "At a global level, extreme poverty is mainly concentrated in rural areas. This is particularly true in Africa, where the increasing number of conflicts is intensifying the effects of rural poverty." Angolan farmer. Credit: Louise Redvers/IPS

UNITED NATIONS, Dec 31 2015 (IPS) - The ongoing battle against rural poverty is in danger of being undermined by a growing number of insurgencies and political upheavals – mostly in Africa.

At the same time, an African Union (AU) peacekeeping mission is standing by in politically-troubled Burundi which is on the brink of a civil war.

In some of the conflict zones, he pointed out, hunger and poverty have actually increased compared to the global level where they actually declined.

“As we know, most of the hunger and poverty are in rural areas. We must break the vicious circle of conflict and hunger/poverty,” said Dr Fan, who received the 2014 Hunger Hero Award from the World Food Programme (WFP) in recognition of his leadership in fighting hunger worldwide.

Addressing the UN’s Economic and Financial Committee last October, Carla Mucavi of the Food and Agriculture Organisation (FAO) emphasized the need for intense agricultural and rural development — since 75 percent of the world’s poor lived in rural areas of developing countries.

Last September, the WFP said it was increasing food aid to hundreds of thousands of hungry people, many severely malnourished, who have fled to Chad, Niger and Cameroon to escape attacks by Boko Haram militants in northeastern Nigeria.

According to the WFP, nearly three quarters of a million people in countries bordering Nigeria are facing a worsening food crisis linked to increased violence by Boko Haram.

When harvests are bad or there isn’t enough food to the last though the hunger season, the rural poor don’t have any safety net, she said.

Unfortunately, when people are hungry and angry—as a result of lack of jobs, lack of rural infrastructure, lack of education, or the impacts of climate change—they become “hangry”, she added, coining a new word.

“This can lead to social unrest like we saw during the Arab Spring or today in Syria. That’s why it’s important for governments to invest in not just rural areas, but also in making rural areas economically and intellectually stimulating places for youth to live and where they see agriculture as an opportunity, not a burden.”

She said investing in the next generation of agricultural leaders—not only farmers, but scientists, extension agents, researchers, and policymakers who care about food agriculture—is not only important for food security, but also for national and international security.

“If we really care about preventing terrorism and social unrest, we need to invest and support rural agriculture and livelihoods”, she declared.

Asked if conflicts are also forcing migration from villages to urban areas — or vice versa (depending on the location of the fighting), Dr Fan told IPS conflict and wars force people to move from their homes to other regions or even other countries.

Increasingly, these refugees live in urban centers or in non-agricultural regions (Turkey, Jordan, Lebanon, and lately Europe). Most of the refugee camps are close to cities.

“Thus we must pay increasing attention to poverty and hunger in urban areas as people are moving to cities either because of economic reasons or conflict. The climate change will further complicate the challenge”, Dr Fan declared.

Reflecting on the shortage of water and sanitation facilities in poverty-stricken rural communities, Tim Brewer, Policy Analyst at the UK-based WaterAid told IPS the lack of basic public health services such as water and sanitation is a huge and significant problem in rural areas of developing countries.

He said more than 426 million people in low income and lower-middle income countries don’t have access to clean water, and more than 1.35 billion in these countries do not have basic sanitation.

“Rural poverty frequently goes hand-in-hand with the lack of access to safe water,” he pointed out.

For instance, on average, one-third (32.3%) of all Sub-Saharan Africans do not have access to clean drinking water and more than 70% don’t have access to a decent, private toilet.

“We also see far higher numbers of people in rural areas — 700% more than in urban areas — depending upon surface water, namely ponds, rivers and lakes, which suggests long, dangerous walks for water.”

Rates of open defecation, which carries huge risk of infection transmission, are also much higher in rural areas. This is true in virtually all developing countries, he noted.

The chore of fetching water often falls to women and girls, taking up precious time that could be spent caring for family, earning an income, studying or at leisure.

“Diarrhoea remains one of the top three causes of child death. Sepsis claims half a million new born babies worldwide each year, and is caused by infections which can often be prevented by good hygiene practices – which require water and sanitation services to be in place.”

He said the number of people with access to clean water worldwide is growing but progress has been uneven, particularly in poorer countries.

Drought, flood and extreme weather shocks exacerbated by climate change are also making lives more difficult; poor communities find it harder to come back from natural disasters, especially if their access to water and sanitation was already fragile.

Conversely, Brewer said, sustainable and robust water and sanitation services help poor communities to be resilient to these shocks, as well as to other changes such as increases in population when people move.

“Access to safe water and basic sanitation, as well as good hygiene practises like handwashing with soap, are the first essential building blocks in development.”

In rural areas particularly, goals to end poverty, malnutrition, preventable diseases and gender inequality depend on achieving universal provision of the human rights to basic water and sanitation, he declared.