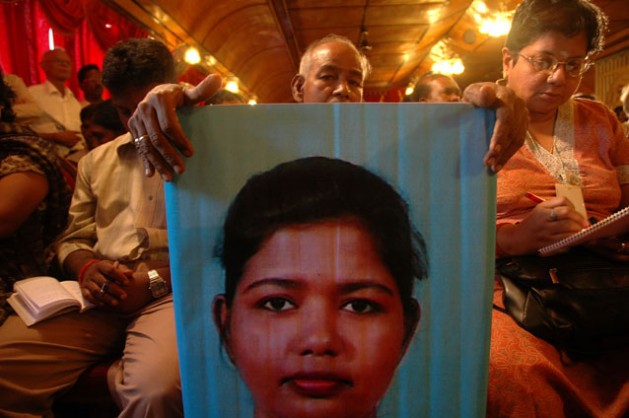 The tales of the missing are still haunting Sri Lanka six and half years after a bloody civil war ended. Credit: Amantha Perera/IPS

The site is nothing new to those who were held there. In June this year the South Africa-based International Truth and Justice Project, Sri Lanka (ITJPSL) launched a 134-page report on on-going human rights violations and past cases in Sri Lanka. The report titled An Unfinished War: Torture and Sexual Violence in Sri Lanka 2009-2014 said. They knew they were being held there, but their family members or others concerned about their state knew nothing of where they were held.

Many of those held were either members or were connected to the separatist Liberation Tigers of Tamil Eelam (LTTE), that was crushed by government forces in May 2009 after over two and half decades of sectarian violence.

“Witnesses described being detained in the Naval Dockyard site along with dozens of other people, however they said it was possible many more were held in the area that they were not aware of because the site was a large area under the control of naval intelligence and well hidden from outside view. The witnesses interviewed were detained here from the end of the war in 2009 for years,” the report said.

Many faced torture at the site and none of the detainees had access to lawyers, human rights groups or the International Committee of the Red Cross (ICRC), which visits known detention sites.

“One witness described being interrogated and repeatedly tortured for many months in this secret site. The witness heard the screams of men being tortured and saw blood resulting from the torture of others. A witness said the methods of physical torture used were: kicking, beating, hitting with plastic pipes while seated or hung upside town and tied up, being beaten with cricket wickets, being confined in a tiny box for days, burned with cigarettes, and toe nails and teeth forcibly removed. One witness describes being tortured by various methods over a long period of time and being sexually abused.”

Their release was quite simple, according to the report, “The detainees interviewed were released to a rehabilitation site only after their relatives had paid large sums of money as a bribe or ransom.” The former detainees were intimidated not to divulge any details of the Navy detention center nor was that mentioned in any of the release papers they were issued.

The former Sri Lanka government of President Mahinda Rajapaksa faced mounting criticism of its human rights records since the war’s end. All of which it denied arguing that they were ill-found allegations based on rumour and innuendo. It also denied the existence of secret detention sites, which according to some organisations ran into the dozens, according to the report.

In a clean break from the past, the new administration of President Maithripala Sirisena and Prime Minister Ranil Wickremasinghe have tried to be much more open with in engaging with the international community. In March this year the Minister of Foreign Affairs Mangala Samaraweera announced at the Geneva sessions of the UN Human Rights Council that the UN Working Group on Enforced and Involuntary Disappearances was to visit Sri Lanka after a 15- year absence.

During the visit between November 9 to 18, the group comprising of Vice-Chair of the Working Group, Bernard Duhaime, and members Tae-Ung Baik and Ariel Dulitzky visited the detention center at the Navy base. “The Working Group visited the Navy Base in Trincomalee and the underground cells used in the past to secretly detain people. It also met with the CID officers who are investigating the case of 11 individuals who were abducted in Colombo in 2008 and brought to Trincomalee,” the group said in its preliminary observations.

“We believe it’s an important discovery and it should be properly investigated. It’s likely that many more people were in that detention center,” Dulitzky said. Dulitzky said that going by the dates inscribed on the wall the detention center appeared to be operational from around 2010. He said that the visitors also saw what appeared to be blood stains. The UN Group said that there were 12 cells in the underground detention center which had originally being an arms storage area. The ITJPSL report had included maps using Google Earth that showed the center located deep within the sprawling camp.

“We saw the number 20100725 engraved on a wall and we guess it is a date – July 25, 2010. All that we saw during our visit bears evidence to the fact that the location which had earlier been used for storing arms, was systematically used as a detention centre,” group member Baik said. The visiting UN team which had been to the site with high ranking police officers facilitated by the Navy said that going by the dates inscribed on the wall, if a proper investigation were launched in 2009, which was when rumours of the centre’s existence started circulating, lives could have been saved.

Both Sirisena and Wickremasinghe had denied the existence or operation of secret detention centers after they assumed power in January 2015. The UN Group did not indicate when the center had ceased operations or whether it had ceased functioning at all. The Navy too has denied that it ever operated any such secret centre. A Sri Lankan Presidential Commission investigating cases of missing persons also said that it was never informed of any such facility during public sittings since 2011.

The visit to the Navy camp has already come under criticism by the opposition who say that it is an act of infringement on national security. “Who gave a authority to a bunch of foreigners to enter and inspect a military establishment,” opposition MP Wimal Weeravansha questioned.

But the discovery has opened up old allegations of the existence of such camps. So far the government has not contradicted the UN Working Group observations, nor has it said that it was launching an official investigation.