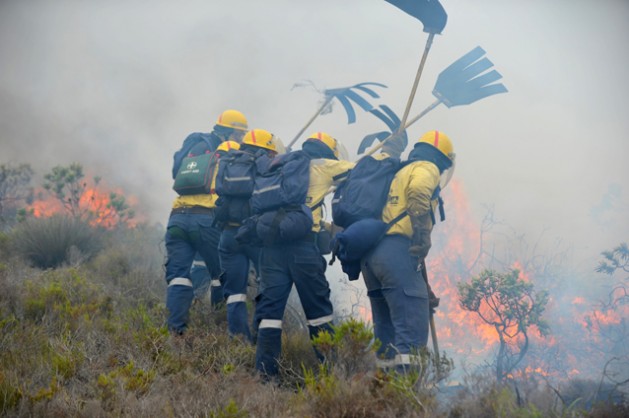 CAPE TOWN, South Africa, Jan 20 2016 (IPS) - Nolukhanyo Babalaza finished her final year of high school and received her diploma in 2000, but this was not an immediate passport to a good life. She was frustrated to see some people making it while she struggled to afford basic things like everyday food.

“It gives one negative thoughts. One ends up doing things you regret,” she said.

Fires are considered a persistent problem in South Africa, a merciless destroyer of life, property and environment.

Either in the dry summer months in the Western Cape, or in the dry winter months in the rest of the country, wildland fires are started by lightning or, in mountainous regions, by falling rocks or accidentaly from careless individuals. Millions of properties are lost annually. Lives and the environment are wasted.

Good things have, however, emerged from this perennial problem.

South Africa’s Department of Environmental Affair’s Working on Fire Programme started in 2003 has become a means to fight unemployment and poverty.

Youths have been drawn from the ranks of the unemployed and poor.

“These young people are trained to help fight unwanted veld and forest fires across the country and often they use their skills as a stepping stone into the formal job market,” says Linton Rensburg, WoF National Communications Manager.

The youths are trained as drivers, brush cutters, dispatchers, helicopter safety leaders and in environmental education. It isn’t big money but it offers a gateway to the future.

Babalaza has grown with the programme. From her start as an ordinary fire fighter she became a crew leader, and then moved to become an administration assistant. Today she is a finance control officer in the programme in the Western Cape.

She admits the programme has greatly improved her life.

“Things are much better. I am able to at least support my family and I can pay my bills,” she said.

Babalaza’s story is one of many involved in the programme, Rensburg told IPS.

“Thousands of young people first found meaningful work opportunities in the programme and later on through the training and skills development aspects of WoF they were able to progress from being a fire fighter earning a stipend to being a salaried employee in WoF,” he said.

Take Justine Lekalakala’s story, for instance. Lekalakala, a former fire fighter at the Dinokeng Base in Hammanskraal North of Pretoria, now works in the South African National Defence Force.

“I was able to use the stipend I earned at WoF to apply for other jobs and educate myself by doing computer courses. It was easier for me to be absorbed into the military as I had the self-discipline and fitness which I acquired in WoF,” he said.

Christalene De Kella was clueless about what she wanted out of life after completing her secondary school in 2004. She grabbed the opportunity to become a fire fighter in her hometown, Uniondale. The single mother of a seven-year old daughter, she has since established a career path for development.

Starting as an entry level fire fighter, she attended several intensive fire management training courses and even participated in opening a new base. In 2005 she was promoted to a stock control officer for WoF.

In 2009 Kella became the media and community liaison officer in the Southern Cape Region and in 2013 she was given the opportunity of becoming a video journalist for the WoF video unit.

“Working on Fire has had a positive impact on my life,” she said, adding she currently travels across the country to interview and record stories for the WoF TV news as featured on You Tube.

The progression could not be sweeter for two former fire fighters who started two-year training in May last year to become spotter pilots at the Kishugu Aviation Academy in Mbombela, Mpumalanga.

Themba Maebela, 27, from Mpumalanga and Siyabonga Varasha, 26, from the Eastern Cape are employed as helicopter personal assistants.

“It was like I was dreaming, my family did not believe me when I told them that I will train to become a pilot,” said Maebela, who joined working for the fire unit in 2010.

South African youth who do not have this necessary diploma must excel in their work and employers will then recognise their talents and skills, he advised.

Rensburg says since the Working on Fire Programme started, it has changed the lives of the 5,000 participants and indirectly benefited 25,000 other dependents.

A 2012 Social Impact Study on participants said that the training presented by WoF boosted beneficiaries’ knowledge and self-worth.

“Through the WoF programme, they were able to get to know their own weaknesses and strengths better,” the study concludes.