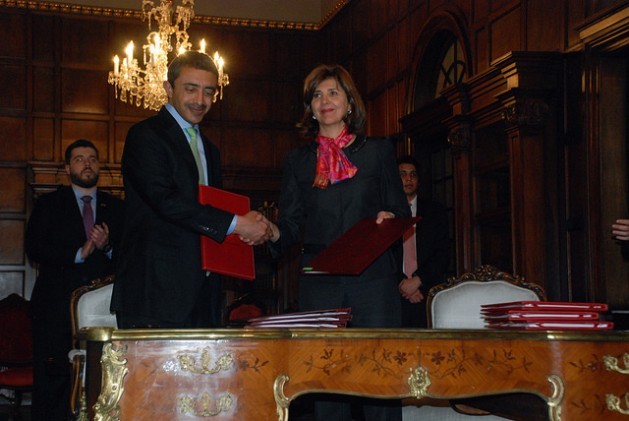 BOGOTÁ, Feb 10 2016 (IPS) - “I am honoured to be in Colombia at a time when important steps towards peace are being taken,” the foreign minister of the United Arab Emirates, Sheikh Abdullah bin Zayed Al Nahyan, said after meeting with Colombian President Juan Manuel Santos.

In Havana, the Santos administration is holding peace talks with the Revolutionary Armed Forces of Colombia (FARC) guerrillas, which have been fighting since 1964. Agreement has been reached on four of the six points on the agenda, including bringing in the United Nations Security Council to oversee any eventual ceasefire agreement.

“You have been caught up in a brutal civil war for a very long time,” said Al Nahyan. “Our region is also in the middle of a very difficult fight against terrorism.

“We would like to learn from your experience in dealing with terrorism and terrorists,” he added.

Late on Tuesday, Feb. 9, the first day of his two-day visit to Colombia, Al Nahyan and Colombia’s foreign minister María Ángela Holguín signed agreements in the areas of cooperation in infrastructure, tourism, trade and investment, renewable energies and culture.

“I’m convinced that through the United Arab Emirates we will be able to reach the Gulf countries, and get to know that region of the world better,” Holguin said during the ceremony held to announce the accords.

“We have all the tools needed to strengthen a very important relationship and continue along the road to generating more development for Colombia and greater opportunities for the UAE,” added Holguín, who described Al Nahyan’s visit as “very beneficial” for bilateral relations. 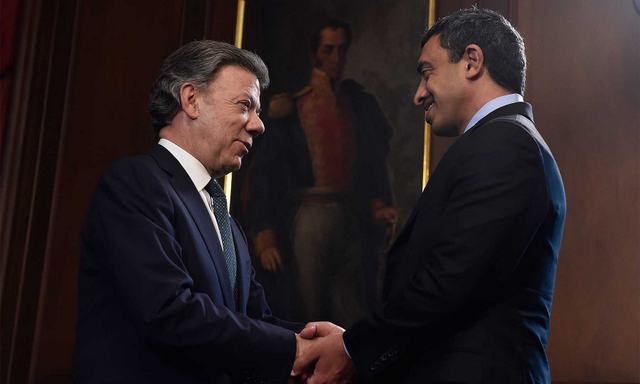 Colombian President Juan Manuel Santos greets the foreign minister of the United Arab Emirates, Abdullah bin Zayed al Nahyan, in the Casa de Nariño, the seat of the presidency, at the start of their Feb. 9 meeting in Bogotá during the Emirati minister’s visit to this South American country. Credit: Presidency of Colombia

They also signed a Tax Information Exchange Agreement (TIEA), which was negotiated in February 2014 during a visit to Colombia by a UAE Finance Ministry delegation, and was pending the ministers’ signatures. The first round of negotiations on the FIPA was also held at that time.

In addition, the foreign ministers signed a Framework Agreement in Cultural, Educational and Sports Cooperation and a Memorandum of Understanding on Cooperation in Environmental Protection, Climate Change and Energy Efficiency, an area in which the two countries have acted in a coordinated manner in global diplomatic forums.

Finally, they signed an agreement from a meeting held Monday Feb. 8 in Bogotá by the Colombia-UAE Joint Cooperation Committee, which is pushing for a strengthening of the growing trade relations between the two countries.

Documents on bilateral cooperation in tourism and innovation in small and medium companies were also signed.

Holguín said the agreements would expedite progress on “more documents” in the near future.

Colombia and the UAE established diplomatic ties 40 years ago. But it was the opening of embassies, in Abu Dhabi in 2011 and in Bogotá in 2013, that basically launched bilateral relations.

Colombia, according to the Emirati minister, was among the first countries to support the UAE’s candidacy to host the World Expo 2020 in Dubai, the first that will be held in the Middle East.

Colombia was the second stop in Al Nahyan’s official Latin America tour, which took him first to Argentina. After visiting the colonial city of Cartagena on Wednesday Feb. 10, to see the port infrastructure, he will continue on to Panama and Costa Rica, before heading home.

An enthusiastic Holguín said her Emirati guest “wants to see the ports, and we hope he will get excited and bring hotel owners to Cartagena, which would also be very important for development in our country.”

“The news is that, first, closer bilateral ties were forged with this tour, which will of course translate into numbers,” Cecilia Porras, the president of the Colombian-Arab Chamber of Commerce (CCCA), told IPS.

“The Arab press is giving a great deal of coverage to this tour because relations with each one of the countries of Latin America are giving a major boost to two-way investment, technology transfer and trade,” she added.

According to the CCCA , Colombia’s exports to the UAE reached 97.6 million dollars in 2014 – the last year for which solid figures are available – nearly double the 50.6 million of the year before, and a far cry from the 11.6 million in exports in 2012.

The difference between 2012 and the following two years is explained by Colombia’s oil exports to the UAE. Although it might sound strange for one of the world’s leaders in oil production to be importing oil from Colombia, the viscosity of this country’s petroleum is useful for the UAE’s blends and for use in the petrochemical industry.

Besides oil, Colombia has exported a variety of goods to the UAE, amounting to between 12 and 14 million dollars, said Porras.

These exports include cut flowers, plants, coffee – although through intermediaries in other countries, such as the United States – gold, emeralds, leather goods such as saddles, designer clothing, knitted fabrics, furniture, sugar and confectionary products, while the UAE exports to Colombia construction materials, doors, windows, ceramics and tubing, as well as petroleum by-products.

Visits to the UAE by Colombian tourists grew 23 percent between December 2014 and December 2015, based on the number of visas arranged by the CCCA, which organises business trips.

In 2014, during a visit by Holguín to the UAE, the two countries signed a memorandum of understanding for political consultation, aimed at facilitating dialogue on bilateral, regional or global issues.

The UAE and Colombia cooperated closely in the negotiations on the 2030 Sustainable Development Goals (SDGs) agenda. Colombia has also played an active role in the International Renewable Energy Agency (IRENA), based in Abu Dhabi.

In January, the Gabriel Plazas public school in the Colombian town of Villavieja, in the Tatacoa desert in the central department or province of Huila, was one of the eight 2016 winners of the Zayed Future Energy Prize, created in 2008 by the UAE government to celebrate innovation and leadership in renewable energy and sustainability.

The 100,000 dollar prize will enable the school to build a “bioclimatic” lunchroom using sustainable construction techniques from the past that keep the school cool in a natural manner, in a desert climate where temperatures remain between 22 and 38 degrees Celsius year-round.

The school will be equipped with solar energy and water extracted from deep wells by means of wind power.

According to data provided by local journalist Luisa Fernanda Dávila, from the Huila newspaper Opanoticias, the cafeteria will be used to serve a healthy lunch to the 539 students, who are the sons and daughters of poor farmers and families displaced by the armed conflict.