IPS is publishing in two parts, the statement delivered by Irene Khan, IDLO Director-General at the 25TH Anniversary celebration of The Daily Star Bangladesh in Dhaka on February 8, 2016

DHAKA, Bangladesh, Feb 26 2016 (IPS) - The second part: the relevance of free speech and free media to development. Freedom is the central object of development, says Amartya Sen. He argues that development cannot simply be seen as GNP or industrialization or social modernization. 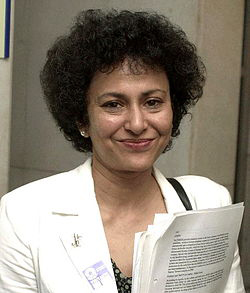 Economic growth and social development are valuable but their value lies in what they do to the lives and freedom of the people involved. In Prof. Sen’s view, development is about the expansion of people’s freedom.

That is today increasingly becoming the international definition of development. Unlike the MDGs that dwelt solely on social indicators, the SDGs contained in the 2030 Agenda for Sustainable Development, adopted by the UN in September last year, talk about equality, equity, transparency and accountability.

During the negotiations at the UN on the 2030 Agenda for Sustainable Development one of the most hard-fought battles was on Goal 16 which is essentially about the rule of law and good governance. Media freedom was one of the elements that many western countries wanted to include in Goal 16. After much debate, it was dropped. Nevertheless Goal 16 is a game changer. It includes public access to information, democratic participation, legal identity, access to justice and the rule of law. It is a clear acknowledgement that development and freedom are indeed inseparable.

The International Development Law Organization which I now head is a strong champion of Goal 16 – because we believe that development cannot be sustained nor be sustainable without justice and human rights.

Speech is a fundamental part of being human. Freedom of speech is essential for our spirit and our soul. That is the ultimate message of the Language Movement.

But freedom of speech – and especially freedom of the press – has also instrumental value as well as intrinsic value.

There is much anecdotal and empirical research to show that when poor people have a voice, when they are informed, when they are able to organize, speak out and take part in decisions affecting their lives and livelihoods, they are able to overcome the deprivation, exclusion and insecurity that are the hallmarks of poverty. In that process they regain their dignity and sense of self-worth.

By “voice” I do not mean only the right to speak out. I mean the right to information about the development choices that are available, including how public funds are being spent. Just as you need an investment friendly climate for economic growth, you need a voice-enabling environment for development. Such an environment is created when there is a free and vibrant press that permits the unhindered flow of information and the unencumbered debate of ideas.

Empirical evidence shows that information and participation of people lead to better development outcomes. Real participation occurs only when civil society can work without pressure, the press is not controlled and people are free to express dissident views.

Free media is good not only for people but also for governments. It directly benefits government policies by providing information on what is really happening, so that governments can adjust policies or correct any mistakes. Prof. Amartya Sen’s study of famines has shown that because of censorship Chinese officials were not aware of the full extent of the famines during Mao’s times, or even of how much grain they had. They massively miscalculated the figures – and millions of lives were lost.

For those who admire the Chinese model of economic development, it would be salutary to remember that lack of transparency has compounded China’s policy mistakes on numerous occasions, for instance about the spread of HIV/AIDS, or the use of melamine in baby food, or about control of air and water pollution. Because the government punishes harshly those who criticize its policies and practices, official corruption and corporate malpractices are not often reported until the scandal can no longer be hidden – and usually by then, considerable harm has been done.

Censorship can keep the government as well as citizens in the dark. When people are kept in the dark, there is little incentive on the part of the authorities to take corrective action. As Prof. Sen has pointed out, it is no mere coincidence that famines have rarely occurred in flourishing democracies.

Public discussion and debate is essential not only for making government more responsive but also society more open, changing attitudes and creating new social norms – for instance to fight gender-based violence, to promote pro-poor policies, to be more environmentally conscious. A free press can open the space for public debate, and can help to form public opinion.

Information is a powerful vector of change. That is why the global Right to Information Movement is so important and has dramatically shifted the burden of accountability in many developing countries. I am told by those working on RTI issues that the law is empowering the poor, making them active and empowered citizens. RTI legislation has been a powerful tool for media in developed countries, for instance it forced the UK government to release information on arms sales to Saudi Arabia that revealed large scale corruption. In Bangladesh RTI seems to be more a tool for citizens, rather than the media.

I fear we do not value our media freedom enough. Indeed, most people, especially poor people, do not care much about democracy and freedom when things are going well.

I read in the local papers that a recent survey has shown that most people in Bangladesh value economic growth over democracy and freedom. When things are going well, that is a common finding not just in this country but in many others. It is when the economy falters and unemployment falls that people come out on the streets, as we have seen in recent years in countries like Egypt or Tunisian or even in western countries like the ones that took place on Wall Street. That is when people begin to value free media.

The stability that we are enjoying now is making us complacent about our freedoms, including our media freedom, but there are grey clouds on the economic horizon – the price of oil falling, conflict and instability in the Middle East, China’s growth figures stalling, and many such factors – that could make us soon more aware of the value of transparency and accountability, public debate and a free press.

The digital age has created a greater awareness of the power of communication. It has made journalists and readers out of all us as we tweet, go on Facebook and You-Tube, or blog. We are all tasting the power of the media in our own ways, and with power comes responsibility and accountability.

Media today is more powerful than ever before. Like all forms of power, it must also be held to account. I am sure we can all tell stories of poor reporting, or unfair invasion of privacy, and false attribution. No matter how independent newspapers are rarely seen to be neutral. The private ownership of media can also be a source of concern, especially when much of it is concentrated in the hands of a few.

The answer to the power of the media is not to censor or seek regulation but to expand the media – encourage more papers, broader ownership, more free press, not less. Let us trust the reader to choose his or her paper, just as the voter chooses his or her government.

In a democracy, free expression allows citizens to challenge political leaders, journalists to uncover information for the public, and the public to ensure the accountability of their government. Without free media and free speech, there can be no development or democracy. That is why in the end, the power of the press always overcomes the power to suppress.