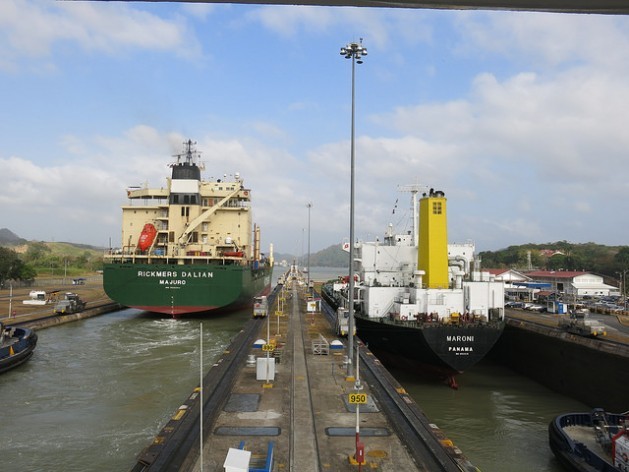 Two ships go through the Miraflores locks on the Pacific side of the Panama Canal, which raise or lower vessels 16.5 metres and take 40 minutes to pass through. Credit: Iralís Fragiel/IPS

PANAMA CITY, Mar 4 2016 (IPS) - When the new locks of the expanded Panama Canal begin operations, they will do so amidst numerous challenges, because of the storm clouds hanging over the global economy, especially China. But local authorities and experts are not worried about the possible impact on the expanded canal.

The slowdown in the Chinese economy, the second largest client of the Panama Canal, transporting 48.42 million tons in 2015, is one of the factors causing concern regarding this motor of the Panamanian economy, which last grew six percent, the highest rate in Latin America.

But the start of operations of the expanded canal, due in May or June, does not worry Luis Ferreira, spokesman for the Panama Canal Authority (ACP), an autonomous government agency.

“When there were economic problems in the past, we would lose basically two to three percent of the cargo; the same thing might happen this time, but we don’t expect a substantial decrease, unless there is an all-out recession in China.” – Luis Ferreira

“When there were economic problems in the past, we would lose basically two to three percent of the cargo; the same thing might happen this time, but we don’t expect a substantial decrease, unless there is an all-out recession in China,” he said in an interview with IPS.

The expansion of the 80-km canal, which turned 100 years old in 2014 and which handles approximately five percent of global trade, involved an investment of 5.25 billion dollars. Work began on Sep. 3, 2007.

With this megaproject, carried out by Grupo Unidos por el Canal (GUPC), the consortium led by Spanish construction firm Sacyr, Panama hopes to increase daily ship traffic from 35- 40 to 48-51.

For Panama’s productive sectors, the expansion of the canal holds out the promise of economic growth.

The ACP’s team of experts in foreign trade told IPS that the weakening of the global economy in 2015 did not affect the canal, and that no impact is expected this year either.

“The volumes of raw materials heading for China for industrial use, such as coal and iron ore, are not significant (for the canal), since there are closer sources in Australia and Brazil, which do not use the waterway,” the ACP experts stated in their collective response to IPS.

Meanwhile, the volumes of grains, especially soy, grew at a strong pace in the last few years, due to the rising demand for food in China.

The experts also said the expansion “will open up new opportunities for trade flows of non-traditional products, such as liquefied natural gas, and will offer economies of scale that will make the Panama Canal route more attractive for segments such as container vessels and dry bulk cargo ships.” 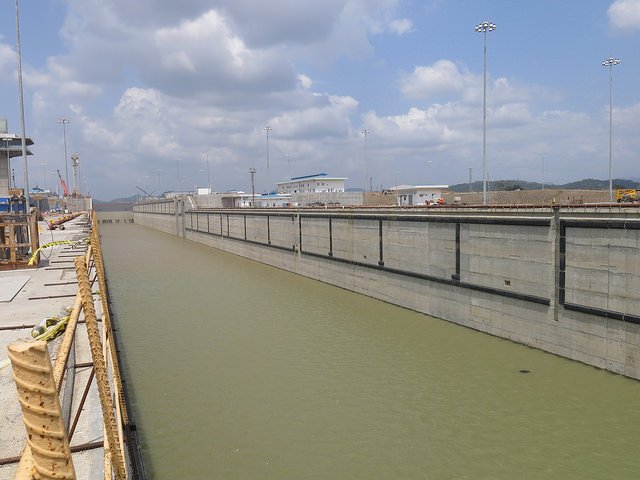 The new locks in Cocolí, on the Pacific Ocean, have 16 rolling gates. Each chamber is 427 metres long by 55 metres wide and 18.3 metres deep. The expanded Panama Canal will be able to handle New Panamax vessels with a capacity of up to 13,000 tons, up from the current 5,000 ton limit. Credit: Iralís Fragiel/IPS

Cargo tonnage by origin and destination has remained steady over the last three years, according to the ACP. The United States remains the largest client of the canal, with a total cargo of 160.78 million tons in 2015.

Given the economic outlook in China and changes in the energy sources used, the ACP is also getting ready for traffic of liquefied natural gas carriers.

“An incursion into new areas of business that reinforce the transportation and logistics industries is being evaluated, such as the case of the Corozal port and the creation of a logistics park that would complement the operations of the expanded canal,” the ACP experts said.

Jordi Prat at the Interamerican Development Bank (IDB) told IPS that Panama has “a positive economic outlook but not without risks.” And in the case of the canal, the United States, which it depends on most, “is growing at a relatively strong pace,” although the vulnerability could increase if the situation in China continues to go downhill.

Prat, the IDB’s principal regional economist for Central America, said the challenge faced by this country is keeping the growth rate between six and eight percent a year, and preventing a decline in maritime trade flows, fuelled by other sources of growth.

Prat pointed out that between 2000 and 2014, the sectors that grew the most in Panama were construction (37 percent), transportation and logistics (22 percent), finance (15 percent) and public services (12 percent).

Besides the economic variables, inclusion is key to development in this Central American nation of four million people, he said.

Panama managed to reduce the poverty level from 38.3 to 25.8 percent, between 2006 and 2014, said Prat. However, inequality is reflected by the fact that 86.9 percent of the population in autonomously governed indigenous “comarcas” or counties is poor.

The IDB economist said Panama should move towards “inclusive growth, by fomenting human capital, education, and access to health and basic services, in order to boost productivity, which has not increased significantly in recent times.”

Analyst Rodrigo Noriega concurs with Prat that Panama has to seriously focus on education, training and scientific research, to bolster development.

“That is where we are limping, in education, and in corruption – these are issues that in the long term definitely hurt the Panamanian economy,” said Noriega.

He said the economy may see growth slow down in 2016 and 2017, due to external factors and the impact of the drought caused by the El El Niño-Southern Oscillation (ENSO), a cyclical climate phenomenon that affects weather patterns around the world.

But he stressed that a project such as the expansion of the canal is not something that is undertaken with a short-term view, but to address the needs of the country over the next 30 to 50 years.

“There will be two slow years, but that is actually a good thing for us because right now we have a water shortage problem. It’s best if the ship traffic isn’t so heavy, because we need to recover in terms of water supply and take baby steps to learn to handle the larger vessels,” said Noriega.