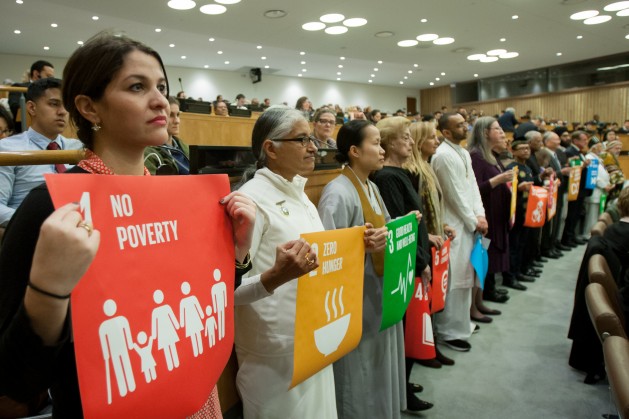 UNITED NATIONS, Apr 21 2016 (IPS) - The traditional definition of aid is being eroded at the same time that governments have committed to achieving the UN’s ambitious Sustainable Development Goals (SDGs), Jeffrey Sachs special adviser to the UN Secretary-General on development told IPS Thursday.

“A lot of governments have a kind of magical thinking which is, we’re all for the Sustainable Development Goals but don’t come to us if you want to achieve them, go borrow from the private markets,” said Sachs.

Aldo Caliari who represents civil society in UN Financing for Development (FfD) negotiations told journalists here Monday that there has been a “significant shift in the language” in these negotiations towards “a larger presence of the private sector”.

“We are concerned about states withdrawing their responsibility and saying the private sector should do it,” said Caliari who is also director of the Rethinking Bretton Woods Project at the Washington DC-based Center of Concern.

“Loans usually go for commercial projects rather than public service delivery so this is an entirely different way of utilising the financing,” he said.

While private sector financing will provide part of the funds needed to achieve the sustainable development goals, there are definitely some areas where public funds remain essential.

“If you want to achieve universal health coverage in poor countries, which is SDG 3, that is a public sector function and the poor countries do not have enough domestic revenues to achieve that on their own,” said Sachs.

“For the poorest countries the Official Development Assistance should be overwhelmingly in the form of grants because putting absolutely impoverished countries into debt makes no sense,” he said.

Sachs said that there are examples right now where donor governments are reducing funding to development programs in favour of domestic refugee costs, peacekeeping budgets and climate financing.

“I know cases where contributions to The Global Fund (to Fight AIDS, Tuberculosis and Malaria) and GAVI (The Vaccine Alliance) were cancelled in favour of climate financing because the government wanted to check the box on climate financing,” said Sachs.

He said that even Scandinavian countries, which he described as “some of the world’s best donors”, were reallocating their development funds to refugee programs.

Jeroen Kwakkenbos, Policy and Advocacy Manager at the European Network on Debt and Development (EURODAD) expressed concerns that some of the biggest increases in the recently published 2015 Organization for Economic Cooperation and Development (OECD) Official Development Assistance (ODA) figures were for areas not traditionally defined as aid.

“One of the largest increases aside from refugee costs was for non-grant financing which is basically loans which increased by 26 percent,” said Kwakkenbos.

Kwakkenbos said that there is a trend towards loans replacing grants in country’s overseas development assistance budgets.

These changes are reflected in donor government aid policies. For example, the Australian government states on its website, that aid represents “an increasingly small proportion of development finance” and that Australia’s aid program will achieve it’s purpose by “supporting private sector development and strengthening human development.”

Kwakkenbos said that the inclusion of refugees in ODA accounting started in the 1990s, “but at the time it was a very small proportion of ODA so everyone just kind of ignored it.”

Overall, the OECD figures showed a small increase in ODA in 2015, without including the refugee costs, although some OECD countries did individually reduce the development assistance in favour of refugee programs.

The OECD told IPS by email that there has “not been any change of rules to allow more refugee costs to be counted as ODA” and that the OECD Development Assistance Committee told donor countries in February they were concerned that refugee costs should not “eat into ODA”.

Despite the small overall increase, most donor countries remain a long way from meeting their commitments to increase aid to 0.7 of one percent of their Gross National Income (GNI).

Kwakkenbos said that the target to reach 0.7 has now been revised to 2030, the same year governments have agreed to achieve the Sustainable Development Goals.